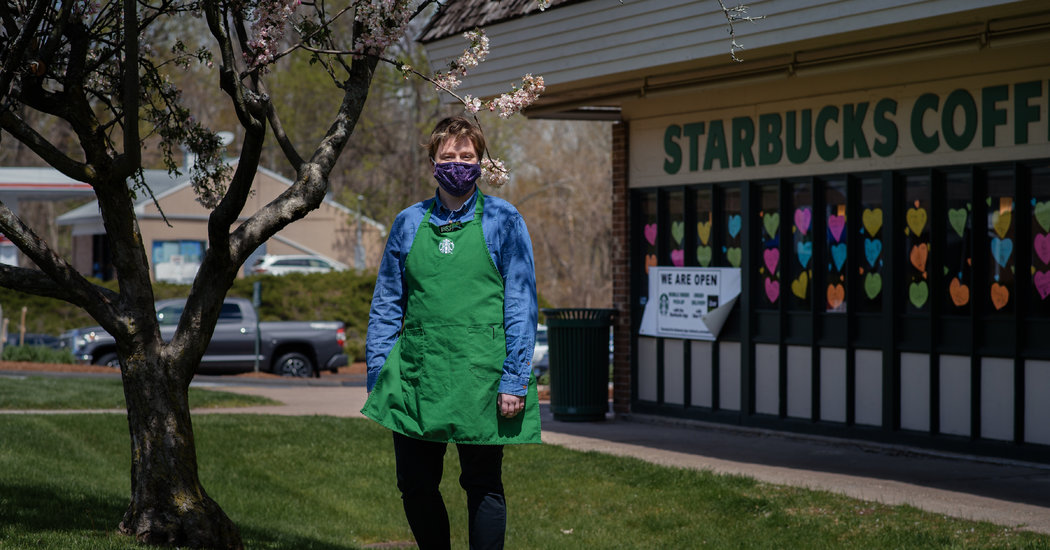 Riley Breakell, a Starbucks barista in Connecticut, was reassured in mid-March when the company sent a letter announcing expanded catastrophe pay for those absent because of the pandemic. Even though she couldn’t live on the roughly $250 per week she received from Starbucks while her store was closed for a month and a half, she appreciated the company’s effort to do right by its employees.

But after the company said those provisions would cease for those who were able but “unwilling to work” as stores reopened last week, Ms. Breakell became increasingly frustrated, questioning her managers over the risks that workers would encounter.

“The first letter they sent said you should not have to choose between your health and a job, and now they’re like, ‘Well, if you don’t want to go back, you have to quit,’” she said last week, shortly before her first day back. “I’m very anxious.”

Early in the coronavirus pandemic, workers like Ms. Breakell spoke up and staged protests to demand that employers provide protective equipment, limit customer traffic or even shut down in the interest of safety. But as many companies return to business, workers are pursuing a new goal: that employers not prematurely roll back measures they put in place.

Employees of Target, some of whom walked off their jobs on May 1 over working conditions, have raised concerns about the company’s decision to resume accepting returns from customers, a service that had been suspended to reduce potential virus exposure.

Some workers at Amazon, who also joined the May Day protests, said they were upset over the end of the company’s policy of unlimited unpaid time off, which many had used to avoid exposure inside warehouses.

And workers at Costco and Whole Foods Markets, which is owned by Amazon, have expressed alarm that their employers appear to be relaxing limits on the number of customers in their stores. Workers at three Whole Foods locations in California said their stores had significantly more customers than usual on some days in the past two weeks.

“Over the Mother’s Day holiday weekend, it seemed that we had nobody monitoring the door,” said Kai Lattomus, a Whole Foods worker in Laguna Niguel. “We had lines that went all the way back to the end of the aisle.”

A Whole Foods spokeswoman said that the company’s social distancing and crowd control measures remained in place, and that the number of customers in a store could vary because of local ordinances and staffing.

Richard Galanti, Costco’s chief financial officer, said that all workers and customers, known as members, must wear face coverings and that the company had expanded store hours to help reduce crowds.

“We continue to make sure the number of members is at safe levels and that they are properly distanced,” he said. The concerns at Costco were reported earlier by BuzzFeed.

The workers speaking out say they are pressing for many of the measures they have pushed for since the pandemic began: more generous and accessible sick leave policies, more protective equipment and better hazard pay.

Ms. Breakell, the Starbucks worker in Connecticut, said workers had been trained to handle mobile ordering procedures that the store had adopted for its reopening, which she acknowledged would be safer than having customers order and pay inside. But she said it was difficult for workers to keep a distance from one another and expressed concern that the ordering policy might not last, citing conversations with supervisors.

A Starbucks spokeswoman said the company was taking several steps to ensure that only healthy employees went to work, such as temperature checks and paid leave for those who may be ill. (Others can apply for unpaid leave.) Workers are required — and customers are asked — to wear facial coverings, she said, and the company is trying to adjust schedules with social distancing in mind.

The company has no plans to allow customers to linger in stores, according to the spokeswoman, who forwarded a number of internal messages from employees expressing gratitude and excitement that their stores were reopening.

The frustrations among workers at various companies have motivated some to begin coordinating their protests.

Nationally, participants in the May Day protests said they had communicated through a group on the encrypted messaging app Telegram that brought together workers and organizers at Instacart, Whole Foods, Amazon and FedEx. Among them was Christian Smalls, who was fired from his job at an Amazon warehouse in Staten Island after leading a protest there in late March. Amazon said Mr. Smalls had violated its social distancing rules.

But there appear to be tactical differences among workers, even at the same company. A Chicago-based group of Amazon workers, DCH1 Amazonians United, released a statement that questioned whether the May Day walkout was the best approach.

“Calling for a general strike is easy — organizing one is not,” the statement said. “Before taking action we’ve got to get organized.”

The anxiety among workers appears to be tied partly to broader policy approaches by political leaders in their cities and states. Willy Solis, a shopper and organizer in the Dallas area for Shipt, a delivery service owned by Target, said he was concerned by the increase in crowds he had observed since Gov. Greg Abbott lifted a stay-at-home order on May 1.

“That’s a fear of mine for sure,” said Mr. Solis, who took part in the May Day walkout. “The opening up of businesses to the general public will create an environment where the coronavirus can rear its ugly head, spread further.”

Mr. Solis said he had greatly reduced his hours since the pandemic’s onset because of an autoimmune disorder. He said that Shipt had agreed to provide workers with masks but that many, including him, could not obtain them consistently.

A Shipt spokeswoman said that workers could pick up masks at any Target location and that the company had sent kits including gloves and hand sanitizer to workers who requested them. Mr. Solis said that masks were not available at every Target he checked and that some locations said the masks were intended only for Target employees, not Shipt workers.

By contrast, in Illinois, where Gov. JB Pritzker has moved to tighten some safety protocols in the past two weeks — for example, by requiring a face covering in indoor public spaces — workers and labor leaders said they felt most large employers were taking safety concerns seriously.

Bob O’Toole, the president of United Food and Commercial Workers Local 1546 in Chicago, which represents about 19,000 grocery, meatpacking and food-processing workers, said his union had been meeting regularly with regional grocery stores and asking them to make additional protective equipment available and to install plastic shields around cashiers.

“Our retailers have been cooperative — they’ve been responsive,” Mr. O’Toole said, a reaction he attributed partly to the tone set by Mr. Pritzker and the state government.

Marc Perrone, the president of the United Food and Commercial Workers International, said the union planned to begin advocating for the interests of nonunion workers as well as its more than one million members.

“The last four, five, six, seven weeks, we’ve been focusing on making sure our folks had personal protective equipment, that people were getting their pay, that we were addressing those issues legislatively,” he said. “We’re going to do the same thing on their behalf, to put some weight behind them.”