Repeat After Me: The Markets Are Not the Economy 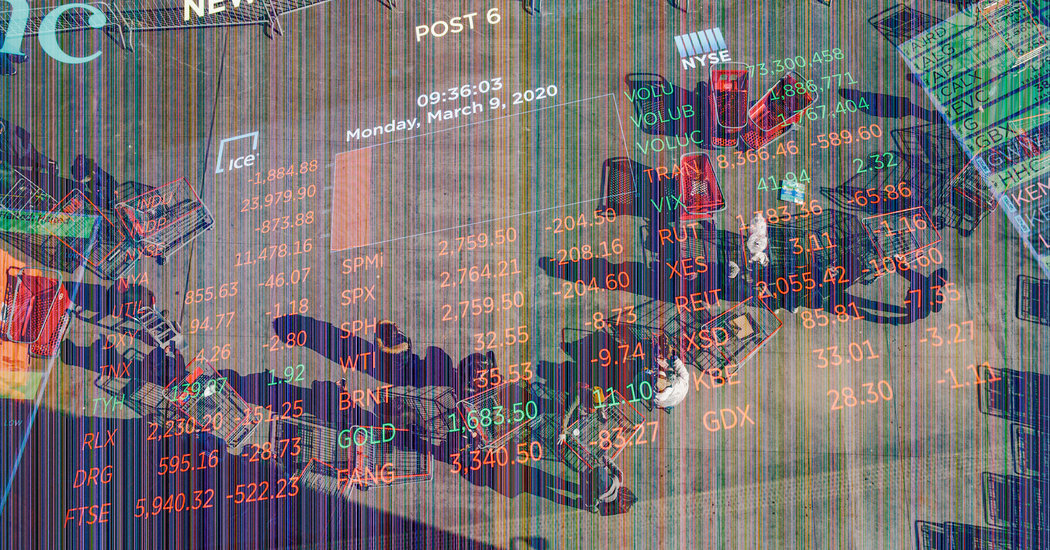 The United States is on the brink of the worst economic collapse since the Hoover administration. Corporate profits have crumpled. More than a million Americans have contracted the coronavirus, and hundreds are dying each day. There is no turnaround in sight.

Yet stocks keep climbing. Even as 20.5 million people lost their jobs in April, the S&P 500 stock index logged its best month in 33 years. After a few weeks of wild swings, the market is down a mere 9.3 percent this year and 13.5 percent from its peak — what most investors would consider a correction. On Friday, after the government released the staggering unemployment figures, the S&P 500 closed up 1.7 percent.

Conventional wisdom would explain the market’s comparatively modest losses this way: Since markets tend to be forward-looking, investors have already accounted for what’s expected to be a cataclysmic drop in second-quarter activity and are forecasting a relatively rapid economic recovery afterward. The Federal Reserve’s actions have also bolstered investors’ confidence that the bottom won’t fall out of the market.

But the pandemic has also highlighted a deeper trend. For decades, the market has been growing increasingly detached from the mainstream of American life, mirroring broad changes in the economy.

“Wall Street has very little to do with Main Street,” said Joachim Klement, a market analyst at Liberum Capital in London. “And less and less so.”

Still, the market retains its grip on the collective imagination. From politicians and corporate executives to mom-and-pop investors, Americans have long relied on the stock market as a proxy for the U.S. economy — for reasons that are partly historical. Its crests suggested bright days ahead, while its troughs suggested a darkening outlook. The current economic fallout, however, could snap any illusions that the logic of the market is derived, in any consistent way, from real-world events.

Part of the reason is the makeup of the stock market, and the fact that the giant companies that make up the S&P 500 operate under very different circumstances than the nation’s small businesses, workers and cities and states. They are highly profitable, hold significant sums of cash and have regular access to public bond markets. They’re far more global than the typical American family firm. (Roughly 40 percent of the revenues of S&P 500 companies come from abroad.)

In 2015, about 600,000 U.S. companies counted at least 20 employees, and only 3,600 of those — or less than 1 percent — were publicly listed, said René Stulz, a professor of finance at Ohio State University, who has studied the changing composition of publicly traded markets.

Because the financial strength of big companies makes them more likely to survive the downturn, their share prices tend to underplay the impact of a widespread economic collapse. In fact, market indexes like the S&P 500 are weighted to reflect the performance of the largest and most profitable companies. In recent weeks, the stocks of such companies have not only veered in the opposite direction of the outlook for the U.S. economy, but from the rest of the stock market itself.

The five largest listed companies — Microsoft, Apple, Amazon, Alphabet and Facebook — have continued to climb this year, as investors bet these behemoths will emerge in an even more dominant position after the crisis. Through the end of April, these companies were up roughly 10 percent this year, while the 495 other companies in the S&P were down 13 percent, according to Goldman Sachs analysts. These highly valued firms — Microsoft, Amazon and Apple are each worth more than $1 trillion — now account for one-fifth of the market value of the index, the highest level in 30 years.

“It’s very easy to get confused by looking at the S&P doing well and that being driven by a relatively small subset of firms which aren’t really affected by this virus and actually gain from it,” said Mr. Stulz.

Nor does the mood of the market necessarily reflect the sentiment of a broad swathe of Americans. While U.S. stock markets are more democratic than most, with more than half of American households owning shares or investment funds like mutual funds, the overwhelming majority of stock accounts are relatively modest. Rather, stock ownership is heavily skewed to the richest segments of the population, who are least likely to feel the pain of an economic downturn.

“Stock ownership among the middle class is pretty minimal,” said Ed Wolff, an economist at New York University who studies the net worth of American families. He added: “The fluctuations in the stock market don’t have much effect on the net worth of middle-class families.”

In fact, a relatively small number of wealthy families own the vast majority of the shares controlled by U.S. households.

Economists who have studied the performance of stock markets over time say there’s relatively little evidence that economic growth matters to the outcome of the market at all.

None of this is a secret. So why do millions of Americans continue to think the market really is a barometer on the economy? That’s more a question of history and culture than economics.

Historians say the stock market’s link in the American psyche to the economic health of the country goes back, at least, to the 1929 crash.

“You can think of the Great Crash as almost traumatizing Americans,” said Janice Traflet, a financial historian at Bucknell University’s Freeman College of Management.

With little quality economic information, many Americans saw the 1929 market collapse — the S&P fell an astounding 86 percent before bottoming in 1932 — as the event that caused the Great Depression. The close connection between the health of the economy and the health of the markets, in the minds of many Americans, had been forged.

“Whether or not they were right or wrong that’s the way many Americans interpreted it. And sometimes perceptions become the reality,” said Ms. Traflet.

The crash put mainstream America off the stock market for decades. But by the 1950s, a marketing push from major Wall Street institutions began to coax newly affluent Americans to invest as postwar prosperity grew. The New York Stock Exchange pushed a campaign urging people to “own your share of American business.”

During the 1950s and 1960s, it was easier to link the health of the largest American companies with the broader health of the country, partly because their enormous payrolls helped fuel the expansion of the middle class.

According to a Brookings Institution report, for example, the two most highly valued companies in the country in 1962 — AT&T and General Motors — employed nearly 1.2 million people combined. Last year, the two largest companies in the S&P 500 — Microsoft and Apple — employed 280,000.