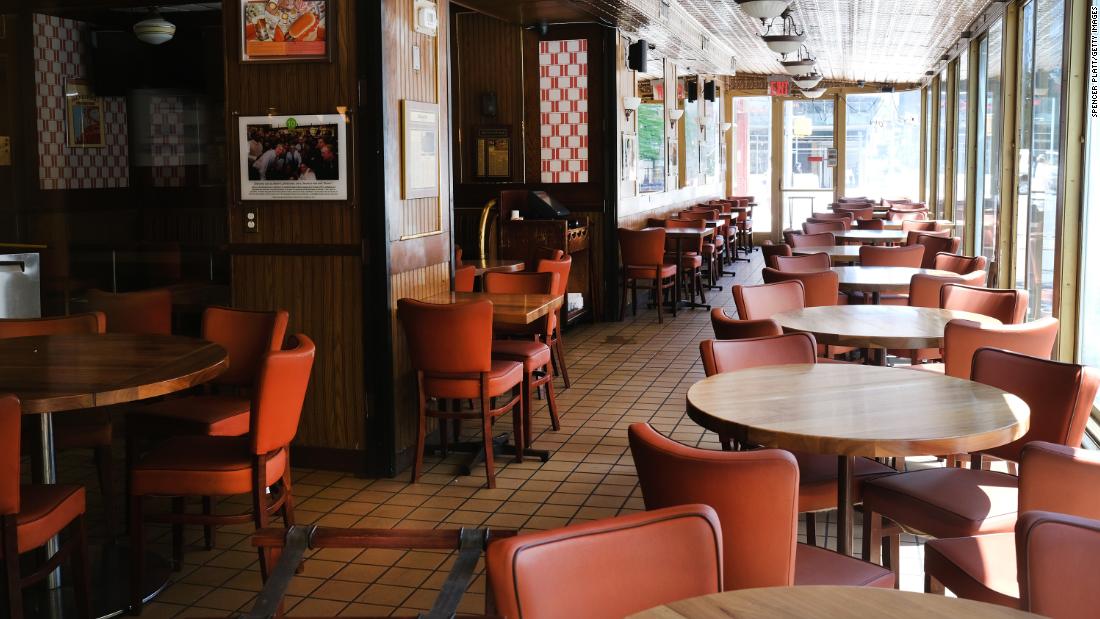 “If you talk to restaurants across the globe, the language might change, but the math is the same,” Pernice told CNN Business. “Restaurants and bars need volume and traffic to make them work.”

Pernice has been forced to lay off or furlough 80 of his 120 staff. Around the world, millions more restaurant and bar workers have lost their jobs as countries impose strict lockdowns designed to contain the pandemic. Some of those restrictions are now being eased, but restaurants and bars are not being prioritized for reopening because they are viewed as venues where the virus might spread.

Restaurant owners and managers are grappling with the brutal math that underpins their industry. Margins are razor thin, forcing eateries and bars to pack in customers every night, and especially on the weekends, in order to stay afloat. In the toughest markets, that means multiple waves of guests, and tables that are pushed together as closely as possible.

It’s a business model that is simply not compatible with social distancing.

“There will be no profits for us while we are social distancing,” said Blaiss Nowak, another Georgia restaurateur who chose to reopen when restrictions were lifted last month. “There are a great amount of restaurants that I’ve heard will never open again.”

Nowak has reduced the number of customers in his restaurant from 200 a night to just 50, with tables spread 12 feet apart. The main dining area, which used to accommodate 60 people at a time, is now limited to 24. He hopes that by opening now, his employees will be trained to deal with social distancing when customers feel more safe returning to eat.

Some restaurateurs say they will remain closed rather than open with reduced seating. New York restaurant operator Union Square Hospitality Group laid off around 2,000 people in March and its CEO, Danny Meyer, said last week that he doesn’t expect customers to return until a vaccine is found. (There’s no guarantee that will happen.)

“There is no interest or excitement on my part to having a half-full dining room while everyone is getting their temperature taken and wearing masks, for not much money,” he told Bloomberg News.

That sentiment is widespread. In Italy, thousands of restaurant owners have protested the government’s proposed social distancing measures, which are due to take effect when eateries are allowed to reopen on June 1.

“This restaurant is the love of my life, but my preference is not to open,” said Mario Firpo, owner of Gennaro Esposito Milano, a pizzeria in Milan. He estimates the restaurant’s capacity will fall by nearly 70% if he’s forced to keep tables two meters apart.

Firpo is part of a movement of Italian restaurateurs protesting online and in the streets under the hashtag “Io non apro” or “I do not open,” while others use the banner “Risorgiamo Italia,” or “Italy Rises Again.”

In the United Kingdom, three quarters of bars and restaurant operators are not confident they will survive social distancing and many would prefer to stay closed, according to a survey of over 260 establishments conducted by bar and restaurant guide SquareMeal.

“If we suddenly halve our customers without government support it will lead to a huge number of business closures and job losses,” said James Ramsden, a London restaurant owner whose business only breaks even at 85% capacity.

Kate Nicolls, CEO of the trade association UK Hospitality, called on the government to support businesses with rent payments to continue wage support for industry workers. “For some businesses, [social distancing] isn’t going to be economically viable and it may be the case that a significant number of outlets cannot open,” she said.

Social distancing at the pub

Bars are even worse off than restaurants, according to Gagan Gurung, the owner of Hong Kong’s Tell Camellia. The former British colony imposed social distancing rules, allowing restaurants and bars to remain open at half capacity and with spacing of five feet between groups.

But when infection rates spiked at the end of March, the Hong Kong Food and Health Bureau found that over half of new cases had originated in bars. As a result, establishments exclusively serving alcohol were ordered to shut down for a month while restaurants continued to operate.

Gurung’s cocktail bar has since been allowed to reopen. But he says that cutting its usual seating capacity of 30 in half is simply not feasible in the long run.

“How do you survive only having 15 people at 1.5 meters distancing?” Gurung said. “It’s not healthy for our business for sure.”

Ireland is known for its pub culture and nearly 8% of the country’s workers are employed in the drinks and hospitality industry, according to a report published last year by the Drinks Industry Group of Ireland. After bars and restaurants were instructed to close two months ago, the Restaurants Association of Ireland reported an estimated 120,000 job losses in the sector.

The Irish government has set a reopening date of August 10 for pubs, but has not yet provided guidelines on social distancing. A model proposed by the Vintners’ Federation of Ireland includes no live music, table service only, and no more than four people per 10 square meters.

For pub owner Brian O’Malley, lockdown has meant turning to innovative ways to make money. He has set up a delivery service for one of his pubs, The Bath in Dublin, bringing freshly poured pints of beer to local residents.

While the delivery service means some money is coming in, O’Malley is worried about the extra costs from protective measures.

O’Malley said staff costs would increase, because workers would need to sanitize tables and be stationed outside toilets to ensure proper hygiene. “I can’t see how staff will reduce at all whereas revenue will reduce a lot,” he said.

Fine dining is also at risk in Ireland, according to Michelin-starred chef JP McMahon, who said that a social distancing policy of two meters means “the industry will be wiped out.” For the industry veteran, there is no commercial logic to opening.

“As responsible directors, we should be saying we shouldn’t open. Should we open knowing these conditions will lose us money?” he asked.