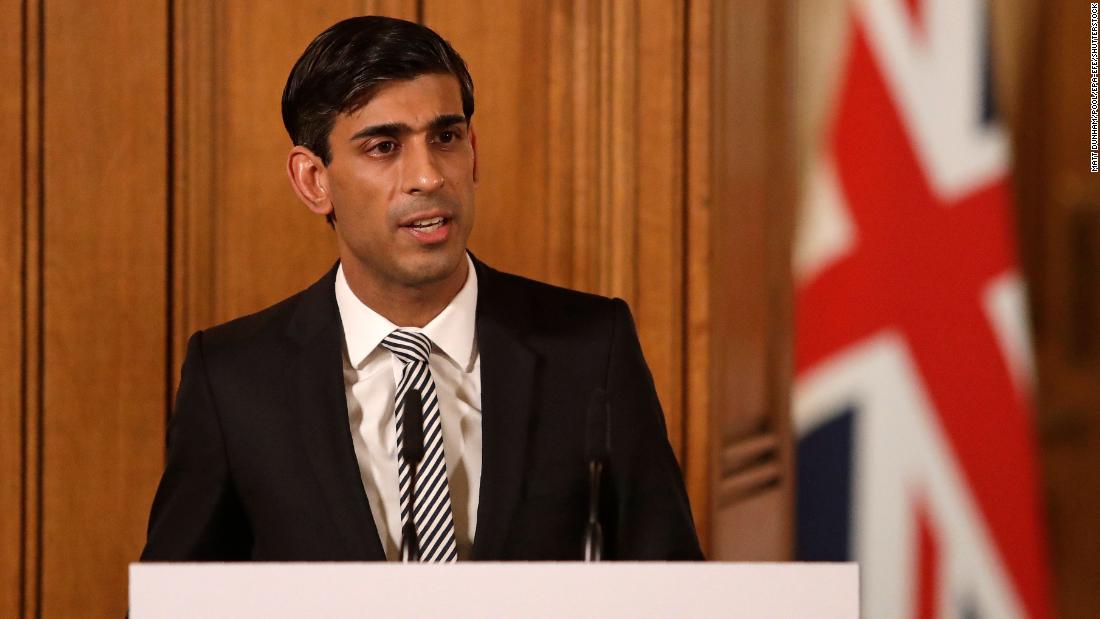 Speaking in parliament on Wednesday, Sunak said that significant job losses are the most “urgent challenge” the UK economy faces, as he announced a package of tax breaks, restaurant discounts and jobs programs designed to bolster employment as the government prepares to withdraw wage subsidies in October.

The coronavirus pandemic has plunged Britain into its worst recession in 300 years, with the economy on track to shrink by 14% this year, according to the Bank of England. It also has fewer than six months to sign a new trade deal with the European Union, its biggest export market.

The spending announced Wednesday brings the government’s stimulus layouts to roughly £166 billion ($208 billion), or 7.4% of 2019 GDP, according to Paul Dales, chief UK economist at Capital Economics.

While he doesn’t expect economic output to fully recover until early 2022, Dales said the scale of direct fiscal support injected into the economy by the UK government now rivals that of Germany (7.3% of 2019 GDP), Japan (7.5%) and the United States (8.4%), and surpasses government support in France and Italy (both 4.5%).

No one can accuse Sunak of “penny pinching,” added Dales.

Businesses will get a £1,000 ($1,255) bonus for each employee they bring back from furlough, costing the government up to £9 billion ($11.3 billion) if employers bring back all 9 million workers enrolled in the wage support program, Sunak said.

The plan also includes a £2 billion ($2.5 billion) program to create and support new jobs for people under the age of 25, who Sunak said are 2.5 times as likely to work in sectors that have been closed by the pandemic. Under the plan, employers will be able to offer government subsidized six-month work placements to young people who are claiming unemployment benefits.

According to the Treasury, a quarter of a million more people under 25 have claimed unemployment benefits since March.

The United Kingdom faces a growing jobs crisis. Major companies have already announced over 80,000 job cuts with more expected when the jobs retention program — which currently supports nearly 30% of the employed — is wound down in October.

Jobless claims reached 2.8 million in May, more than double the number in March, according to the Office for National Statistics.

The unemployment rate has so far remained low, but it could soar to nearly 15% in the fourth quarter if there is a second coronavirus outbreak, according to the Organization for Economic Cooperation and Development. Even without an additional outbreak, the jobless rate is expected to be nearly 10% at year end, the Paris-based agency said earlier this month.

“Furlough has been a lifeline for millions but it cannot and should not go on forever,” Sunak said Wednesday, adding that it will be wound down “flexibly and gradually.” A total of £1.6 billion ($2 billion) will be invested in training, apprenticeships and scaling up employment support measures, including doubling the number of work coaches to 27,000, Sunak said.

Paying people to eat out

In an effort to protect the 2.4 million jobs that depend on hospitality and tourism, Sunak said he was cutting sales tax from 20% to 5% for six months.

To boost demand further, meals at participating restaurants, cafés or pubs will be discounted by up to £10 ($12.50) per head from Monday to Wednesday for the month of August — a program Sunak dubbed “Eat Out to Help Out.”

“Applying every precaution to provide safe venues will count for nothing if customers are not coming through our doors,” Nicholls said in a statement. “We hope that the UK public rightly sees it as sign that we are ready to welcome them back safely,” she added.

The finance minister also announced a £3 billion ($3.8 billion) green investment package, which could help support around 140,000 jobs. It includes grants for homeowners to make green improvements to their homes and money to make public buildings more energy efficient. The measures could help the United Kingdom meet its 2050 target for net zero carbon emissions.

About £5.8 billion ($7.3 billion) will be spent on construction projects, including new schools, hospital maintenance, roads and housing, in line with Prime Minister Boris Johnson’s promise to “build, build, build” and “level up” Britain with increased investment in regions outside London.