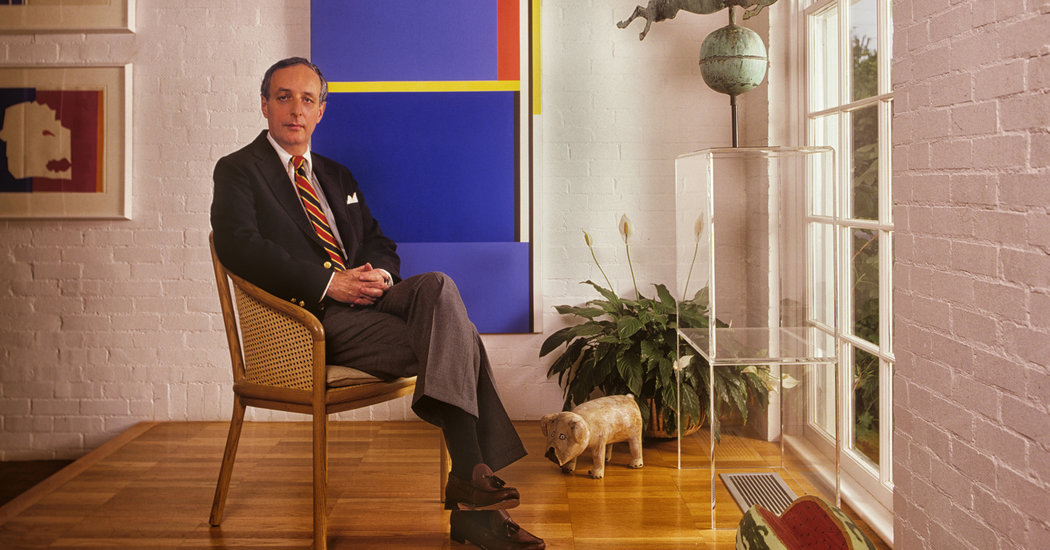 A boy in Cincinnati wakes up in the night to hear striking piano music — “alive, exciting,” he would describe it decades later — emanating from a gathering his parents are having downstairs. He goes to investigate and sees George Gershwin himself at the piano.

The music sticks with the boy, and 58 years later, having become a rich man, he sinks his money into developing a Gershwin musical, “Crazy for You.” His Broadway producing debut, it opens in 1992, becomes an international hit and wins the Tony Award for best musical.

That is the biographical arc of S. Roger Horchow, who died of cancer on May 2 at his home in Dallas. Except that it leaves out the part about being a pioneer in the mail-order luxury goods business, which is where all that “Crazy for You” money came from.

Mr. Horchow’s death, at age 91, was announced by his family in a statement.

In 1971, after a decade at Neiman Marcus, Mr. Horchow founded the Horchow Collection, a mail-order business aimed at the middle and upper-middle classes that sold jewelry, housewares, furniture, clothes and more. He sold the business to Neiman Marcus in 1988 for $117 million.

By then he had already done a little investing in Broadway shows — he said that the $15,000 he put into “Les Miserables,” which opened in 1987, earned him a 600 percent profit. And he’d begun talking to the producer Elizabeth Williams about his longstanding dream of reviving “Girl Crazy,” a 1930 show with music by George Gershwin, lyrics by Ira Gershwin and a book by Guy Bolton and John McGowan.

That idea became “Crazy for You,” with songs by the Gershwins (some from “Girl Crazy,” some from other sources), a book by Ken Ludwig and lots of input from Mr. Horchow, who brought the gut instincts he used to select items for his catalogs to the business of constructing a musical.

“I wanted Elizabeth as a partner because of her experience,” he said of Ms. Williams, his co-producer on the show, in a 1992 interview with The Houston Chronicle, “but even having one partner was a new thing for me. I was very much involved in selecting the cast, as well as the songs for the show.”

In September 1994, with the show more than two years into what turned out to be a four-year, 1,622-performance run, Mr. Horchow even took the stage for a few performances, playing the father of the story’s leading lady.

“I’ve never danced,” Mr. Horchow confessed to The New York Times just before his moment in the spotlight. “Of course, I’d never produced a play, either.”

Samuel Roger Horchow was born on July 3, 1928, in Cincinnati. His father, Reuben, was a lawyer and state official. His mother, Beatrice Schwartz Horchow, was a concert pianist, which is how Gershwin came to be playing in the family’s home, invited there after a concert.

Mr. Horchow graduated from Yale University in 1950 with a degree in sociology, then served in the Army Security Agency during the Korean War. He was a buyer for Foley’s department stores in Houston from 1953 to 1960, then went to work for Neiman Marcus as merchandise director.

The Horchow Collection was unusual at the time in that it was not affiliated with brick-and-mortar stores.

“This business is more risky for a strictly mail-order house,” Mr. Horchow told The Times in 1978. “You don’t have the ‘home base,’ the retail identity of a store.”

Not to mention the occasional wrinkle. A Christmas catalog in the late 1970s offered a combination clock radio and tiny television. On the TV, an image of the actor Cliff Robertson could be seen; the catalog photographer had simply turned on the set and taken a photograph of whatever happened to materialize. The actor was not flattered.

“For anyone to pick up a catalog and see his puss there, the reaction might be, ‘Gee, he’s a little low on the hog,’” Mr. Robertson told The Times. He sued the Horchow Collection for using his picture without authorization. The case was settled, with Mr. Robertson receiving money and an apology.

In any case, the Horchow Collection was a success, so much so that by 1984 Mr. Horchow was worried about getting too big.

“If we got huge, we’d need middle management,” Mr. Horchow, who enjoyed selecting merchandise for the catalog himself, told The Times that year. “I really don’t want that.”

After selling the catalog business and using the proceeds to try his hand at producing, Mr. Horchow faced a bit of a learning curve.

“He’d come into the theater and see one guy hammering and 14 guys standing around, and like any rational businessman, he’d say: ‘What’s going on? This is insane,’” R. Tyler Gatchell Jr., the show’s general manager and a theater veteran, told The Dallas Morning News in 1993. “The problem is, this is how we do it. We had to explain that the 14 guys couldn’t go ahead until the one guy finished hammering.”

Mr. Horchow also learned that once a show was set in motion, it became something of an insatiable beast, one that ate money.

But the show’s triumphant success — it also won Tonys for Susan Stroman’s choreography and William Ivey Long’s costumes — must have given Mr. Horchow the theater bug; he was later among the producers of five other Broadway shows, including a 1999 revival of “Kiss Me, Kate” and a 2012 revival of “Annie.”

Mr. Horchow’s wife of 49 years, Carolyn Pfeifer Horchow, who worked closely with him on the Horchow Collection, died in 2009. He is survived by three daughters, Regen Fearon, Lizzie Routman and Sally Horchow, and five granddaughters.

In the 1992 interview with The Chronicle, Mr. Horchow reminisced about that childhood encounter with Gershwin.

“His music just has the greatest appeal for me,” he said. “His jubilance, his minor chords. Funny, I don’t remember anything he said that night I met him. But I remember him playing his Second Piano Prelude.”