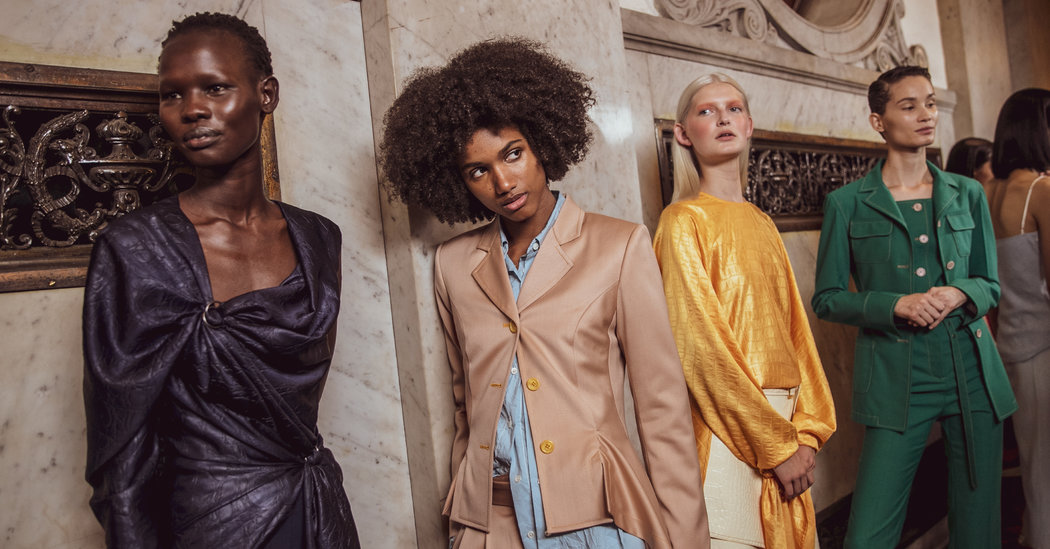 Sies Marjan arrived on the New York fashion scene in 2016 with a blast of color, industry fanfare and an exclusive two-year retail deal with Barneys New York.

The creative director was the Dutch designer Sander Lak, a charming onetime member of Dries Van Noten’s design team who named the label after his parents. Joey Laurenti, an Opening Ceremony alumnus, was the chief executive. And bankrolling the endeavor were the billionaires Nancy and Howard Marks, who used the New York showroom and atelier of a previous fashion acquisition, Ralph Rucci, as the headquarters for the new label.

The first show was in the penthouse, still under construction, atop a luxury condominium building in Lower Manhattan. Anna Wintour took pride of place in the front row.

How times have changed. On June 16, Sies Marjan announced that it would close its doors at the end of the working day.

“As a young independent company, we were significantly impacted by Covid-19,” the email statement read. “With a heavy heart, we have made the very difficult decision to close our business.”

The decision made Sies Marjan the latest fashion name to be felled by the fallout of the coronavirus pandemic, which has brought the industry to its knees, thanks to a global sales slump and significant production delays. It also underscored the fragile operating models of independent fashion businesses, many of which had already been stretched to a breaking point.

Initially, the future had seemed bright for Sies Marjan, with its distinctive point of view and handsome, slightly eccentric European designer. Mr. Lak was a welcome advocate for a rainbow palette in a city known for its penchant for black. He offered tailored women’s wear in myriad textiles that tended to have a lounge-y elegance and a quirky simplicity.

Critics murmured approvingly. In 2018, Sies Marjan won the CFDA Award for Emerging Talent, and Mr. Lak expanded his offerings to include men’s wear. His designs were worn by celebrities, including Beyoncé and Zoë Kravitz. Wearable as well as eye-catching in their saturated shots of color, they were also popular with non-boldface names, despite high prices.

The backing of billionaires, however, did not make Sies Marjan immune to the hurdles that have become increasingly insurmountable for small fashion companies. Unlike brands in the conglomerate stables of Kering or LVMH, Sies Marjan could not tap into shared resources for manufacturing and marketing. Limited investment in its direct-to-consumer retail operations also made it dependent on wholesale partners.

The downfall of Barneys New York, and the growing crisis faced by many multibrand retailers, left Sies Marjan painfully exposed. Then the pandemic hit, and stores canceled or postponed orders.

In May, Sies Marjan signed on to the #rewiringfashion proposal, which suggested seismic changes in the fashion calendar and production cycles that could give faltering businesses a better chance at a long-term future. But for Sies Marjan, that was not to be.

“What we have worked on has been a dream come true,” Mr. Lak said in his farewell statement, hours before the Sies Marjan Instagram account was deactivated. “We have built a singular brand whose legacy is not just in the clothes and collections but within each person who contributed along the way.”

Most industry insiders expect an eventual return to the fashion world for Mr. Lak, but he didn’t say what would come next. Like so many in a business looking to a brighter horizon, perhaps he simply doesn’t know.