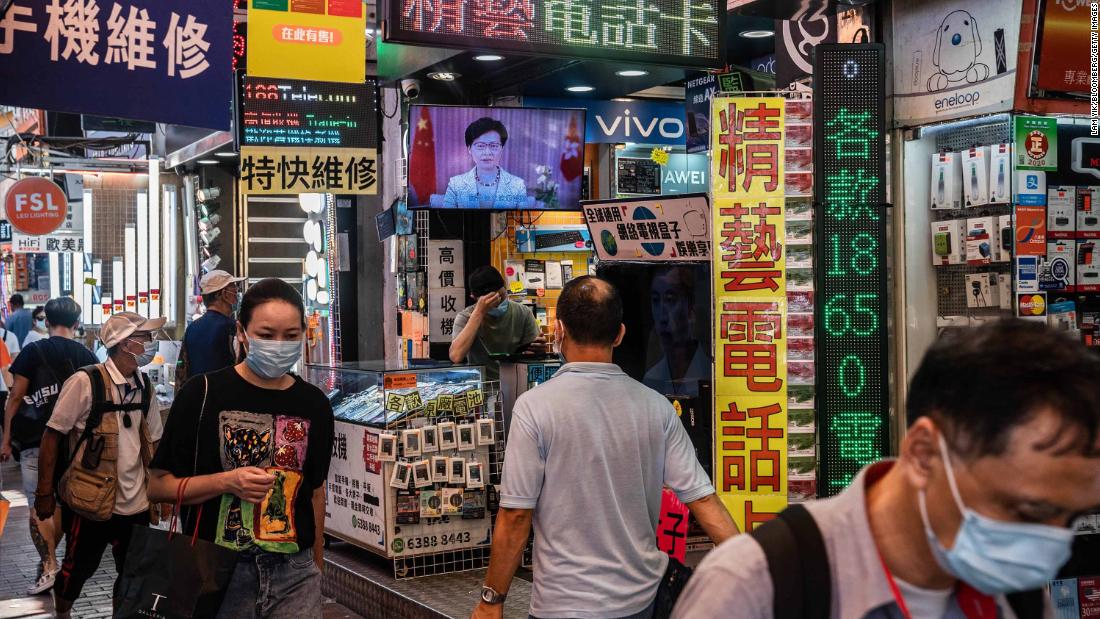 It criminalizes offenses such as secession and subversion against the central Chinese government, and its passage has already prompted some opposition groups in Hong Kong to disband. It has caused outcry in the West, where politicians and democracy activists have criticized it as damaging to Hong Kong’s semi-autonomous status.

“In general, the business community wants the rule of law and they want a stable business environment,” said Simon Lee, a senior lecturer of finance at the Chinese University of Hong Kong. “As long as this national security law can provide stability for business operations, it is quite okay for them.”

Hong Kong authorities have also tried to soothe fears about how it could affect the city’s global reputation. The financial sector has “commonly” said the law “will help Hong Kong restore stability and order,” wrote Financial Secretary Paul Chan in a blog post Sunday. The city was rocked last year by months of pro-democracy protests.

But many other international companies, and some local entrepreneurs, are very nervous.

Gordon Lam, a 35-year-old businessman who owns bars and restaurants in Hong Kong, told CNN that the law is China’s most serious assault on the city’s freedoms.

“As the Hong Kong national security law comes into effect, many business owners in the catering sector are afraid whether we will be penalized for speaking our mind,” said the pro-democracy businessman, who leads the Hong Kong Small and Medium Restaurant Federation.

When the law was first announced in May, the city’s benchmark Hang Seng Index (HSI) slumped — though it has stabilized since. And more than 80% of firms that responded to a survey conducted by the American Chamber of Commerce in early June said they were either “very” or “moderately” concerned about the law and felt pessimistic about Hong Kong’s future.

Some expressed fears that it could lead to “potential harassment and privacy concerns,” or that more restrictive measures could be on the way. Others were concerned about the law’s ambiguity and the erosion of Hong Kong’s autonomy, a loss of talented employees or status as an international business center. American companies also fear that an escalation in US-China relations could hamper cross border deals.

More than 50 out of the 180 respondents to the survey said they were considering moving capital, assets or business operations to “other locations.”

Will the US punish Hong Kong?

The United States has already warned that it is looking at Hong Kong differently than it has in the past. Washington has previously said it would unravel a special trading relationship with Hong Kong, and Secretary of State Mike Pompeo said this week that the United States would end exports of US-origin defense equipment to the city.

The special arrangement between Hong Kong and the United States has its benefits, such as allowing Hong Kong to avoid tariffs that Washington imposed on Chinese goods as part of the US-China trade war. The value of the trading relationship between the two, though, is trivial compared to the direct relationship between the United States and mainland China.

Hong Kong’s real advantage, however, is the opportunity it has afforded foreign firms to operate without restrictions encountered elsewhere in China. Beijing regulates everything about how a foreign company does business in the mainland, from how much capital they can invest there to how large of an ownership stake they can hold in their own business ventures.

Unraveling that relationship between Hong Kong and the West would be complicated, given how closely the two are intertwined. Citi analysts have said that more than 1,300 US companies alone operate in the city, for example. And analysts from Eurasia Group warned recently that any redefinition of Washington’s ties with the city would “touch on complicated issues of regulatory cooperation, tax treatment, and legal cooperation.”

Change in those areas would not “unfold quickly,” the Eurasia Group analysts wrote in May, adding that President Donald Trump was unlikely to immediately sanction Hong Kong in a way that hurts its financial stability, such as making it harder for Hong Kong authorities to clear US dollar transactions.

Washington’s response this week on defense exports is “not entirely surprising,” wrote economists at Citi in a research note Tuesday. And even if Washington were to revoke the special status it has given Hong Kong, that may not “materially affect” the city economically — “though we need to watch out for potential US sanctions on high-level individuals and secondary sanctions on financial institutions,” the economists added.

Nick Marro, global trade lead at the Economist Intelligence Unit, wrote Wednesday that the new national security law “might have somewhat of a chilling effect on international business sentiment, which could make it more difficult to attract overseas capital and talent to the region.”

Any US sanctions might be targeted at Chinese individuals and entities, but that could still raise “uncertainty around doing business in Hong Kong, undermining near-term economic prospects,” Marro added.

For those companies already considering moving operations or people out of Hong Kong there aren’t very many good alternatives.

Singapore is the only other hub in the region that even comes close, analysts have told CNN Business given its status as a major financial center in Asia that has a convertible currency and favorable regulatory environment. The city-state also is only a few hours flying distance from many of the region’s most important players, giving it a leg up over cities like Sydney.

There are some concerns, though, including a controversial fake news law introduced by the Singaporean government last year that critics said was leading to increased censorship and official overreach.

And regardless of Singapore’s financial prowess, analysts still stressed that Hong Kong holds an edge.

Some foreign companies might be comfortable operating under Chinese law in the end, Brock Silvers, chief investment officer for Hong Kong-based Adamas Asset Management, told CNN Business last month, especially if their business is “significantly China focused, or reliant on government good will.”

Some companies that trade publicly in New York, for example, have expressed unease that the United States is becoming more hostile for them as regulators and lawmakers consider rules that would lead to harsher scrutiny. Some restrictions could even make it tougher for companies to go public or keep trading in New York.

Those concerns have already been cited by companies such as NetEase (NTES) and JD.com (JD), both of which completed secondary listings in Hong Kong in June.

“China’s tech giants see Hong Kong as middle ground,” said Silvers. He pointed out that the city is “under Chinese control, but still with US dollar access.” Hong Kong allows capital to flow more freely than mainland China, and the city’s currency is also freely convertible.

Analysts at Jefferies suggested earlier this year that the Hang Seng Index will eventually have a “complete makeover” as more Chinese internet companies list in Hong Kong, edging out more city-centric stocks, such as banks and property firms.

In a research note, Jefferies analysts said the Dow Jones Industrial Average (INDU) has outperformed the Hang Seng because of its willingness to replace “stagnant” companies with “successful, high-growth” ones.

“We believe the [Hang Seng] will undergo a similar change over the next few years, and will become an index that reflects mainly the growth of new economy companies in China,” they wrote at the time.