Shearing Sheep, and Hewing to Tradition, on an Island in Maine 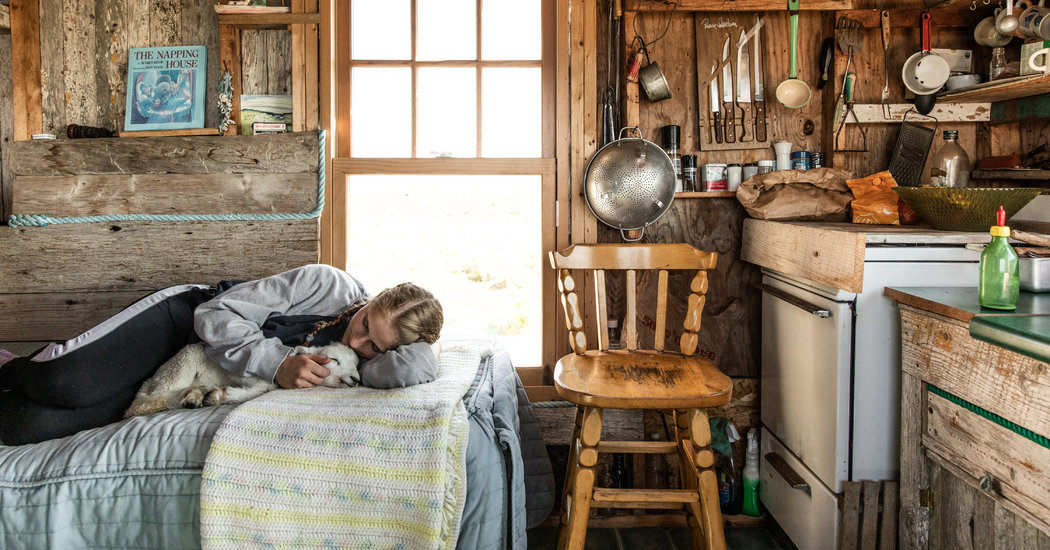 With travel restrictions in place worldwide, we’ve launched a new series, The World Through a Lens, in which photojournalists help transport you, virtually, to some of our planet’s most beautiful and intriguing places. This week, Greta Rybus shares a collection of photographs from a set of islands in Maine.

Three miles off the coast of Maine, in a remote area northeast of Acadia National Park, lies a cluster of islands — including Little Nash Island, Big Nash Island and Flat Island — populated only by sheep.

The Wakeman family, who live on the nearby mainland, are the year-round caretakers. Alfie Wakeman works full-time as a pediatric provider in the local clinic. His wife, Eleni, works full-time as a speech-language pathologist and the assistant fire chief for the local volunteer fire department. Their three daughters — Wren, Lilly and Evie — are all college-age or newly graduated.

Each spring, Alfie leaves his medical practice for three weeks to live on Big Nash Island for the lambing season. (In his text messages, Alfie includes smiley faces when he talks about going to the island, or about new lambs; sad faces punctuate his texts when he discusses leaving the island.) The sheep, wild and self-sufficient, are able to thrive off the providence of the island. But every so often a sick lamb needs special care.

About a century ago, a 10-year-old girl named Jenny Cirone — the daughter of the lighthouse keeper on Little Nash Island — began raising sheep. She would go on to tend her flock for more than 80 years.

Alfie, Eleni and their daughters knew Jenny well. They lived next door to her and helped her care for the island and its sheep. They still understand this part of the world largely through Jenny and her stories.

Jenny knew everything about the island and the ocean around it. She hauled lobster traps with Alfie almost until the day she died, a month shy of 92. She remembered each sheep, its lineage, how much wool it made. She gave names to every lamb, and to each spot on the ocean floor that was good for a lobster trap.

At the end of lambing season, a community gathers on Big Nash to help round up and shear the sheep. (The other islands’ sheep will be sheared, too, but those require smaller crews.) The volunteers — around 40 people — include a handful of knitters and spinners; they often wear sweaters made of Nash Island wool. Some show up because they live down the road and are accustomed to pitching in. Others are lured by an adoration of good wool. Still others come because of the island itself — for the tradition, for the memory of Jenny.

Before they’re sheared, the sheep must be rounded up — a process that requires considerable patience. Around 20 people sweep the island methodically; no animals can be left behind on the little hills or rocky beaches, and the sheep shouldn’t be spooked. (Sheep are notoriously skittish.) Everyone joins in — their arms outstretched, their hands sometimes clasped together — as they funnel the sheep toward a corral made of salvaged driftwood.

When the corral is full, the crew works to pull lambs from underneath the sheep, moving them to a separate pen; there, the rams are castrated and the ewes’ tails are docked. Each lamb and sheep is carefully checked and given any necessary care. Meanwhile, the shearers skim whirring blades along the bodies of the sheep, their hands and the clippers hidden under the thick wool. (Much of shearing is done blindly, by feel.)

The work is physically demanding, but the shearers move quickly, often without pausing for food or water. After hours of labor, and once the last sheep’s wool has been removed, the shearers return their tools to their cases, the blades slick with lanolin, and the group migrates to a cabin — Big Nash’s lone building — for a potluck meal: baked beans, a salad, turkey, rhubarb cakes. A simple rule is announced: “The shearers eat first.”

Another roundup will happen again in the fall: The sheep will be gathered, checked and tended to. Some will stay on the island, growing thick with wool, while most of the males and a handful of ewes will be brought to the mainland to be processed as meat.

The sheep chosen for slaughter will be scooped up, their soft woolen bodies carried from the driftwood pen, down the rocky beach, to a dinghy. Then, from the dinghy to the family’s lobster boat, until sheep are packed from bulkhead to transom, calm and blinking in the sun. Volunteers will sit on the sides of the boat or climb onto its top as it motors back to the mainland. A waiting truck will bring the sheep to the local butcher.

Maine was once a land of shepherds. Its islands and coastal communities were dotted with the fleeced bodies of sheep, its shrubs and trees grazed into oblivion. Historical photos show wide expanses of pasture that have now become thick with forests and houses.

Back then, there were more families like the Wakemans, who raised their own animals and grew their own food, who gathered people together to share both their work and a meal, who used dark humor and whispered their thanks on the days when animals gave up their wool or became food.

Some of the sheep spend their entire lives on these islands, from birth to death. They become the islands. Their sun-bleached bones are entrenched in the earth, embedded in the grassy knolls and wetlands where they once grazed, their bodies decomposing to nourish a new generation.

Jenny Cirone is also here; her gravestone sits at the far end of Big Nash, her ashes buried in the place with the best view of the lighthouse. She, too, is a part of the island — the grass, the sea, the sheep, the story.