Something Weird Is Happening on Wall Street, and Not Just the Stock Sell-Off 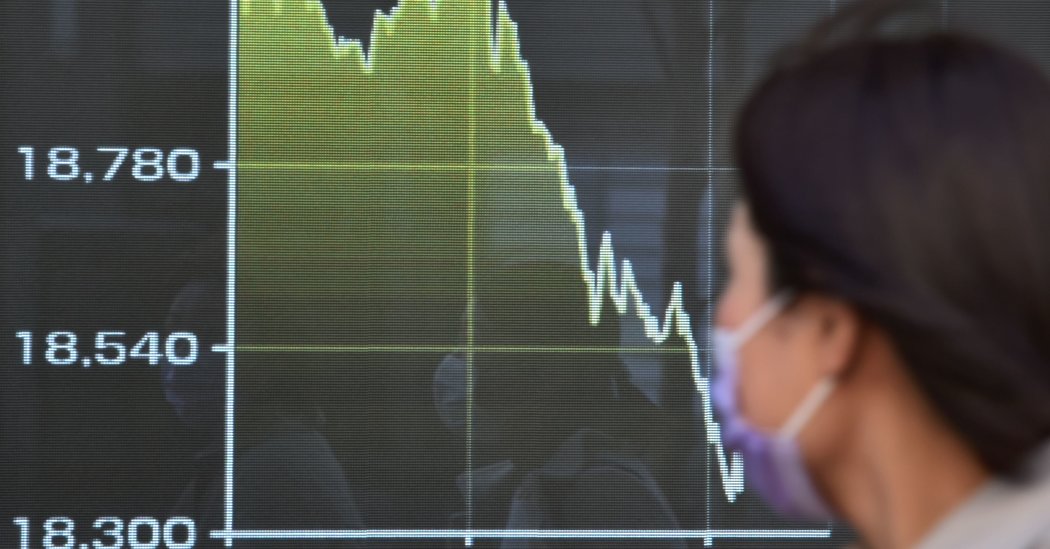 Wednesday was an unsettling day on global financial markets, and not just because the stock market fell sharply enough to bring a decade-plus bull market to an end.

Underneath the headline numbers were a series of movements that don’t really make sense when lined up against one another. They amount to signs — not definitive, but worrying — that something is breaking down in the workings of the financial system, even if it’s not totally clear what that is just yet.

Bond prices and stock prices were moving together, not in opposite directions as they usually do. On a day when major economic disruptions resulting from the coronavirus pandemic appeared to become likelier — a situation that might be expected to make typical market safe havens more popular — many of them fell instead. That included bonds of all sorts and gold.

And there were reports from trading desks that many assets that are normally liquid — easy to buy and sell — were freezing up, with securities not widely trading. This was true of the bonds issued by municipalities and major corporations but, more curiously, also of Treasury bonds, normally the bedrock of the global financial system.

People, it is fair to say, are worried about bond market liquidity.

Any one of these moves on its own wouldn’t really matter. Markets can move for all kinds of reasons, most of which affect only the investors and traders involved. But these types of swings give experienced financial market watchers a sinking feeling, the kind last felt widely during the global financial crisis when all kinds of obscure financial markets went haywire.

Suppose you looked at the score of a football game, and it was a 31-3 blowout.

You would have a pretty good guess about what had happened. The winning team’s offense must have gained huge amounts of yardage, enabling it to score all those points, while its defense was tough and prevented the opposing team from gaining much yardage.

That guess would usually be correct, but once in a while, when you look deeper into the statistics you might see that the opposite happened — for example, a winner that scored lots of points despite not gaining much yardage, with an opponent that did the reverse. It would tell you that a deeply strange football game had been played.

The global financial markets this week, and especially Wednesday, have been that very weird game of football. At some point, the weirdness can be as important as the final score in terms of understanding what is likely to happen in the future.

Consider the most basic two types of assets: stocks and bonds. Normally, especially in times of financial stress, these move in opposite directions. When there is good news and the outlook is bright, it is known as a “risk-on” day, meaning people are comfortable buying risky assets like stocks, driving up their price, while driving down the price of safer assets like bonds.

A “risk-off” day is the reverse — a day investors plow money into safe assets out of fear of what will happen next. It reflects a flight to safety and a reasonable expectation that if conditions worsen, the Federal Reserve is more likely to lower interest rates, which as a matter of arithmetic justifies higher bond prices.

That has been an extremely powerful relationship through most of this year and, indeed, most of the 12 years since the global financial crisis. That’s why it was odd that on Tuesday and Wednesday, as the S&P 500 was down nearly 5 percent, the benchmark 10-year Treasury bond yield rose by 0.06 percentage points.

There has also been a wide gap between the prices of certain “exchange traded funds,” which are easily traded, and the securities on which those funds are based. This is irrational, in theory — the equivalent of a 12-pack of soda selling for more than the price of 12 individual sodas. It suggests sellers desperate to raise cash and an absence of big banks or hedge funds in position to exploit the mispricing.

Gold futures have been falling, despite its historical role as a place for safety during tumultuous economic times. Its price has fallen to $1,610 on Thursday from $1,675 an ounce at Monday’s close.

All this suggests that major financial players are experiencing a cash crunch, and are selling whatever they can as a result. That would help explain the seeming contradiction of assets that should go up in value in a time of economic peril instead falling in value.

As the 2008 experience shows, it’s also a type of problem that the Federal Reserve is relatively well positioned to understand and respond to. In its role as lender of last resort, the central bank’s job is to try to prevent a cash crunch in the economy, even if it has to take unusual means to do that.

In the global financial crisis, that meant an alphabet soup of complex programs with names like the “Term Securities Lending Facility” and “Primary Dealer Credit Facility.” The programs were meant to pump liquidity into various corners of the financial system. Fed officials are probably spending their days and nights trying to sort out exactly what is going wrong in the current episode and what approach is best for bringing markets toward normal.

The volatility in markets in the last few weeks reflects the deep uncertainty around the near future of the world economy. But for now it is being compounded by something strange happening just beneath the surface, creating ripples like the ones that were evident Wednesday.