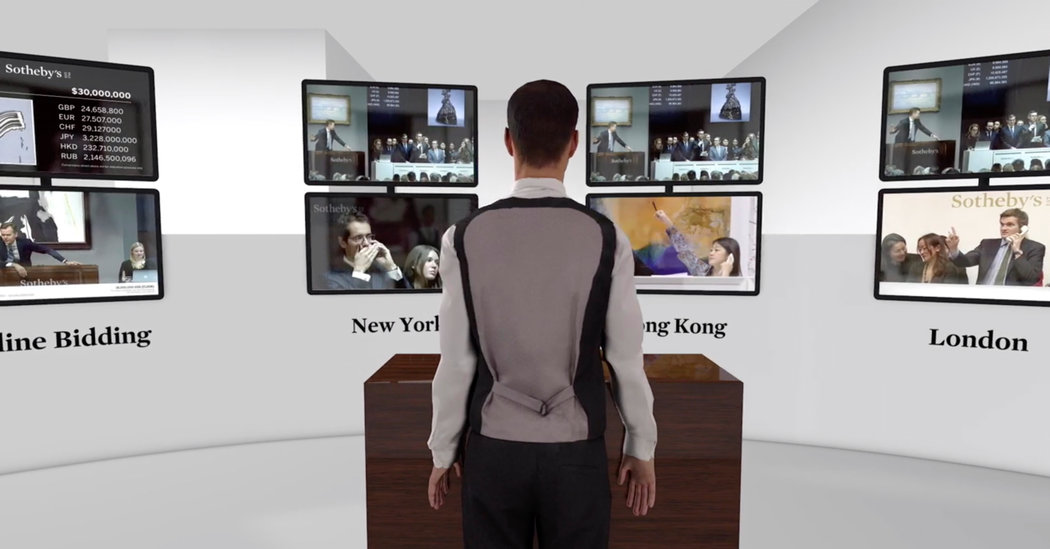 The Sotheby’s auctioneer, Oliver Barker, will be live, by video, in London, looking at screens showing his associates live in New York, Hong Kong and elsewhere, who will be on the phone with live bidders all over the world.

It’s a far cry from the buzzing salesroom in Manhattan, where hundreds of collectors, dealers, art advisers and spectators typically hobnob over champagne before sitting side by side to raise their paddles in nail-biting battles for great works of art.

But this digitally streamed live auction next month will allow Sotheby’s to proceed with its big-ticket biannual art sale that was supposed to take place in May but was delayed by the coronavirus outbreak.

On Friday in a conference call, Sotheby’s executives announced that the first sale, of contemporary art, would be June 29 beginning at 6:30 p.m., immediately followed by its Impressionist and modern art evening sale.

The auctions will be livestreamed in high-definition, each lot accompanied by an onscreen image. Bidders can participate by phone or online. Mr. Barker will take bids from Sotheby’s specialists on the phone banks in New York, London and Hong Kong with the results broadcast to screens in a control center studio setup.

“It’s definitely a first,” said Mr. Barker in the conference call. “This will be the first time that I have taken to the rostrum in London in order to conduct a New York sale.”

Works can be viewed virtually online and by appointment beginning June 8 at Sotheby’s Manhattan galleries.

Their Hong Kong sales, which were postponed from April, will take place as usual July 5-11, with the auctioneers live and bidders expected in the salesroom, given that restrictions have been lifted. While protests have resumed there, Patti Wong, the chairwoman of Sotheby’s Asia, said this “hasn’t deterred clients from bidding.”

At the top of the New York lineup on June 29 is Francis Bacon’s 1981 three-part oil painting, “Triptych Inspired by the Oresteia of Aeschylus,” which is estimated to sell for at least $60 million. The work has been guaranteed by Sotheby’s, meaning the auction house has already secured a bid. Still, given the demand for Bacon, there is likely to be competition for the painting, which would lift the price over the estimate.

Whether the excitement typically generated by such a bidding war can be replicated remotely remains to be seen.

Mr. Barker bullishly predicted it will “be a dynamic, truly global experience that will usher in an exciting new era of marquee auctions at Sotheby’s in which the best of the established live auction format is with married with the latest technology.”

In doing so, Sotheby’s will be following the lead of its rival, Christie’s, which announced on May 15 that it would be offering a hybrid of online bidding, streaming and in-room bidding for its sales of Impressionist, modern and contemporary art. The auctions will take place in consecutive sessions from across four Christie’s salesrooms — Hong Kong, Paris, London and New York — on July 10.

Phillips, the third major auction house, is set to announce its live auctions (with bidders in the room where permitted), with contemporary sales on July 2. Their auctions have been streamed live online for about five years, according to a Phillips spokesperson.