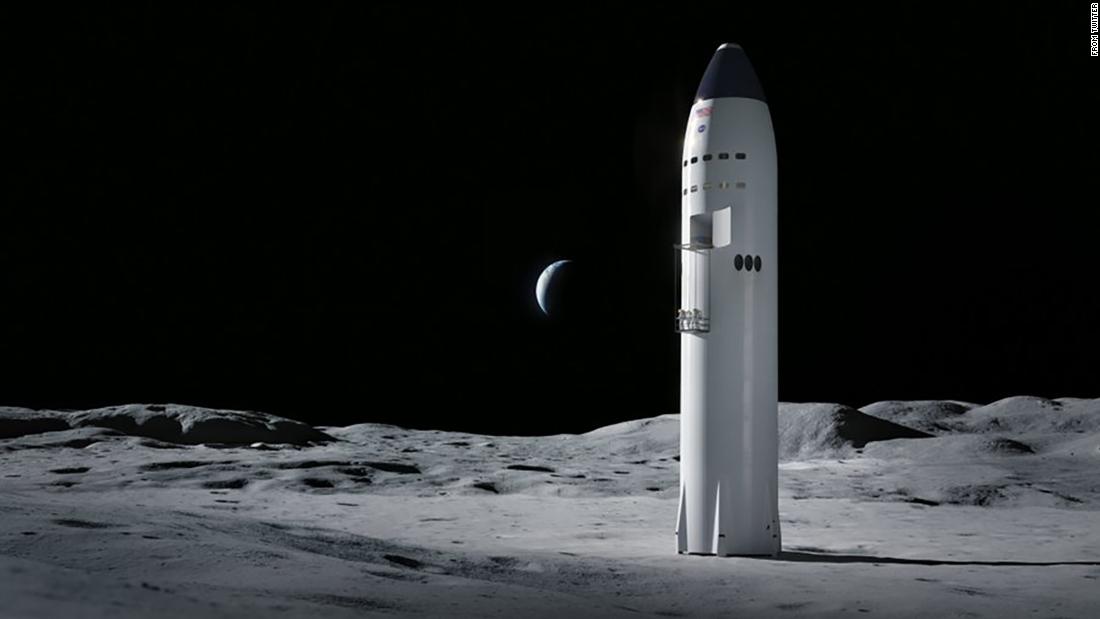 The contractors include SpaceX, which proposed NASA use the Starship spacecraft the company is developing for deep-space exploration, and a “National Team” that is lead by new-age space venture Blue Origin. The team also has help from legacy aerospace firms Lockheed Martin (LMT), Northrop Grumman (NOC) and the nonprofit research group Draper.

The third contract was awarded to Dynetics, a 46-year old firm based in Huntsville, Alabama, for development of its own lunar lander.

During a call with reporters Thursday, NASA Administrator Jim Bridenstine said the space agency would assess which of the three proposals could give NASA the “highest probability of success and the lowest risk” in safely getting astronauts to the moon by the space agency’s 2024 deadline.

NASA said this first batch of contracts would give the companies development money to last through the next 10 months. Blue Origin, which NASA said is furthest along in its lunar lander development, will receive $579 million. Dynetics will get $253 million, and SpaceX will receive $135 million.

The lunar lander is a crucial part of the Artemis program, which NASA says will put two astronauts — one man and one woman — on the moon. It will mark the first time humans have set foot on the lunar surface since the final Apollo moon landing in 1972.

Vice President Mike Pence made the stunning announcement in March 2019 that NASA would return humans to the moon in 2024 “by any means necessary” — a directive for the space agency to drastically accelerate its previous plans to return to the moon in 2028.

NASA later pledged that mission would include the first-ever female astronaut to land on the moon and named the program Artemis, the name of Apollo’s twin sister in Greek mythology.

NASA called on the private sector in September to submit proposals for the design of a human lunar lander.

Months earlier, Jeff Bezos, Amazon billionaire and Blue Origin’s financial backer, traveled to Washington DC to show off Blue Moon, his space venture’s vision for a lander capable of hauling cargo and crew to the lunar surface.
During a conference in October, Bezos announced that Blue Origin decided to partner with Lockheed, Northrop and Draper to make the lunar lander a reality, and together they would submit a bid for a NASA contract.
SpaceX also began investing heavily in development of its Starship system last year, which CEO Elon Musk has long touted as the technology that could carry human settlers to Mars. The company is currently testing early prototypes of the spacecraft at its facilities in south Texas.

NASA selecting Starship as an option for the moon landing is surprising, as it is more of an all-in-one spacecraft that is designed to carry people off the Earth’s surface, all the way to the surface of the moon or Mars, and back again.

A one-piece approach would eliminate the need for Space Launch System, or SLS, the NASA-designed rocket that Boeing has already been working to build for years to launch NASA astronauts into deep space. Bridenstine had expressed commitment to SLS, despite criticism over the project’s cost overruns and delays. On Thursday, he told reporters he was open to using other rockets to carry a lunar lander out to the moon, but he said NASA astronauts must make that journey aboard Orion, which is designed to launch into space atop NASA’s SLS rocket.
It’s not clear if SLS will be ready to fly astronauts before the space agency’s 2024 deadline. SLS was supposed to fly its inaugural test mission in 2017, though that date was later pushed back to 2021. And NASA said last month that only “limited” work on SLS would continue amid the Covid-19 pandemic. Manufacturing and testing of the vehicle were put on hold as the agency works to comply with social distancing and safer-at-home policies created to thwart the spread of the virus.
Musk has faced criticism on social media for his comments criticizing lockdown orders in the United States. He joined a NASA press call with reporters on Thursday but did not take questions. Bridenstine declined to comment on the matter, saying only that NASA and SpaceX are working together closely to prepare for a historic crewed mission next month. SpaceX plans to launch two NASA astronauts to the International Space Station aboard the company’s Crew Dragon spacecraft on May 27.

NASA’s directive to land humans on the moon by 2024 has been widely criticized as unrealistic.
It’s also not clear if Congress will give NASA enough funding for its lunar ambitions. The space agency was given most, but not all, of the money it requested for Artemis in the spending bill lawmakers passed in mid-December.

Bridenstine told reporters that the Artemis program has garnered bipartisan support among lawmakers, and NASA’s human spaceflight chief, Doug Loverro, said he does not expect “any impact” to NASA’s budget due to the ongoing coronavirus pandemic.