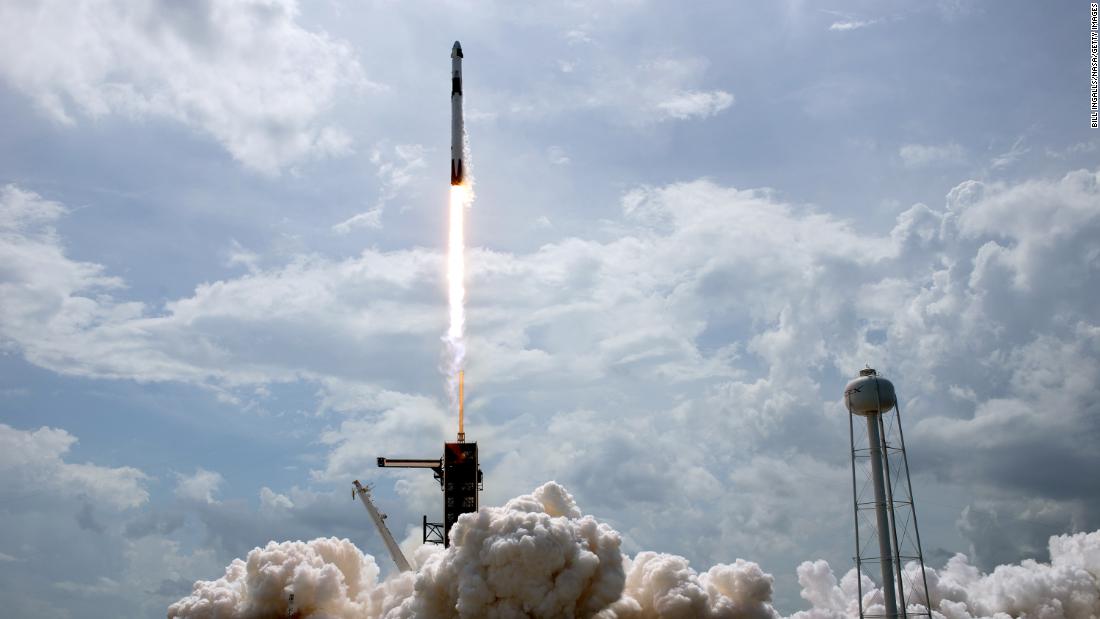 Now that NASA astronauts Robert Behnken and Douglas Hurley have made it aboard the International Space Station, Musk is breathing a sigh of relief that his company’s Crew Dragon spacecraft and Falcon 9 rocket performed successfully during this weekend mission. Now SpaceX can officially consider itself the first-ever company to send humans into orbit aboard a privately owned spacecraft.

But it’s not over yet. Critical weeks of safety and technical reviews of the spacecraft lie ahead before NASA will officially designate Crew Dragon as an “operational” vehicle. Then, another Crew Dragon spacecraft must be deemed ready for the next mission, dubbed Crew-1, that will carry four more astronauts to the space station: NASA astronauts Victor Glover, Michael Hopkins, Shannon Walker and Japan’s Soichi Noguchi.

NASA is hoping to launch Crew-1 in August.

The mission Behnken and Hurley began over the weekend won’t be considered a success until they return safely to Earth, but their mission is expected to last up to 110 days, and the journey home will be just as perilous as the ride to orbit.

Crew Dragon’s debut, however, is a significant milestone for SpaceX and NASA, and this mission was one of the biggest items both organizations needed to check off the list before turning to larger ambitions.

The United States hasn’t launched its own astronauts into space since the Space Shuttle program ended in 2011. Since then, NASA’s astronauts have had to travel to Russia and train on the country’s Soyuz spacecraft. Those seats have cost NASA as much as $90 million each.
But the space agency chose not to create its own replacement for the Shuttle. Instead, it asked the private sector to develop a spacecraft capable of safely ferrying astronauts to and from the International Space Station — a controversial decision considering that NASA had never before outsourced the development of a human-rated spacecraft. The thinking was that companies could drive down costs and spur innovation, and NASA would have more time and resources to focus on exploring deeper into the solar system.
In 2014, NASA awarded two contracts: $4.2 billion to Boeing to build its Starliner vehicle, and $2.6 billion to SpaceX, which planned to create a crew worthy version of the Dragon spacecraft that was already flying cargo to and from the International Space Station. NASA had already put money toward SpaceX’s development of the Dragon spacecraft used for transporting cargo, and the space agency has said Boeing received more money because it was designing the Starliner from scratch.
Boeing recently suffered a significant setback when a Starliner capsule malfunctioned during a key uncrewed test flight. But if SpaceX can safely return Behnken and Hurley, it’ll be a major win for NASA, which has been pushing for more commercial partnerships.

At times, delays with development of both the Crew Dragon and Boeing’s Starliner capsule have threatened to leave the US portion of the ISS understaffed.

But, after years of anticipation, Crew Dragon capsules are poised to begin making regular trips to and from the space station, allowing NASA to take more control over staffing the ISS. The space agency hopes to have more hands on deck, creating more opportunities for conducting scientific experiments and maintaining ISS operations.

Because the Crew Dragon program is technically owned and operated by SpaceX, the company can even explore opportunities to take tourists or other non-astronauts to space.
Actor Tom Cruise, for example, is working with NASA to eventually film a movie aboard the ISS, the space agency says.

NASA’s ambitions extend far beyond the ISS, which orbits about 250 miles above Earth.

And last year, Vice President Mike Pence directed the space agency to drastically accelerate its plan to return boots to the lunar surface by later this decade. NASA is now pushing toward a 2024 deadline.
SpaceX wound up being a part of that effort, called the Artemis Program, too. SpaceX proposed a new variant of its Dragon capsule, Dragon XL, that could haul cargo all the way out to a space station that NASA planned to put in orbit around the moon. And last month, SpaceX was among several companies tapped to develop lunar landers, or vehicles that can ferry astronauts from NASA’s Orion spacecraft down to the lunar surface.

For the latter task, SpaceX proposed using the Starship system — a spaceship and rocket that the company is in the early stages of developing at remote facilities in South Texas.

Musk has spent a significant amount of time overseeing that work in Texas lately. And the latest iterations of Starship prototypes haven’t survived very far into the testing process.

Musk has given every indication that SpaceX will pour significant resources into Starship development in the months and years ahead.

The company is building a multibilllion-dollar telecom business, Starlink, that SpaceX hopes will help fund development of the Starship program, and the company continues to raise hundreds of millions of dollars from private investors.

The origin of Starship, after all, is not with NASA or its Artemis Program. Starship is at the core of SpaceX’s stated founding mission to establish a colony of humans on Mars.

Technologically speaking, that milestone is likely still a long way from reality.

But Musk, speaking to reporters after Saturday’s Crew Dragon launch, reaffirmed his commitment to Mars as he breathlessly celebrated Hurley and Behnken’s safe departure.

“I am sort of overcome by emotion. To try to come up with cohesive sentences that make any sense is quite difficult,” Musk said before adding, “But I think this is, hopefully, the first step on a journey towards civilization on on Mars.”