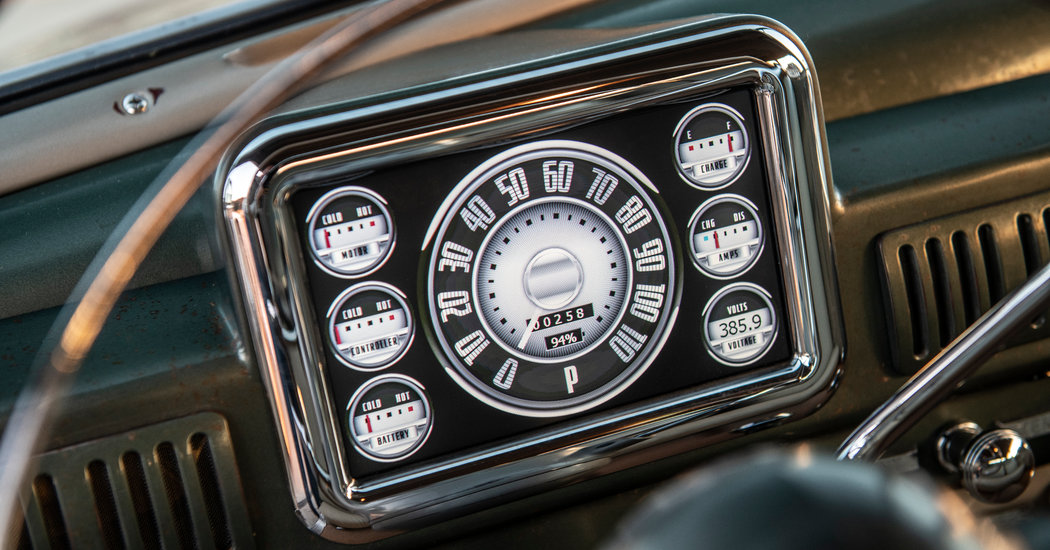 When Prince Harry married Meghan Markle, it wasn’t the romance or the pageantry that set automotive hearts aflutter. It was the couple’s Jaguar E-Type Zero, a classic E-type body fitted with a modern electric drive, that caused a swoon.

Best of all, mere commoners could buy one, Jaguar said, for an estimated $380,000. Until they couldn’t.

In late 2019, more than a year after the wedding, Jaguar broke the news: “Jaguar Classic has taken the difficult decision to pause development of the all-electric E-Type Zero for the foreseeable future.”

But fret not. You can still get an electric E-Type, possibly for less than Jaguar would have charged. If you supply the Jag, “I think we could do it for $100,000,” said Michael Bream, owner of EV West, a San Marcos, Calif., conversion shop that turns gas guzzlers into electrically charged chariots. His shop has converted a Dodge A100 van, a Dowsetts Comet and some BMW classics, the M3 and 2002. After working out the kinks on the first E-Type, he said, the costs could come down to $50,000.

A convergence of interest in electric power and classic cars has spawned specialty shops that turn classics into silent brutes with tire-burning torque and vintage style. The problem facing these shops is that the technology now advances so quickly that a build may be outdated before it’s complete. These shops are now working to speed up production, bring down costs and put bolt-on car conversion kits into hobbyists’ hands.

The conversion market came to life during the 1970s oil crisis, when gas prices skyrocketed and around-the-block lines formed at the pumps. “People were trying to screw Big Oil, driving their car with a forklift motor in it,” said Marc Davis, founder of Moment Motor Company, a conversion shop in Austin, Texas.

When the crisis ended, so did interest in electric cars. There was a resurgence in the 1990s when California essentially forced major manufacturers to offer zero-emissions vehicles if they wanted to sell their gas-powered cars there. The fate of the General Motors EV1, its response to the California edict, was the basis for the 2006 documentary “Who Killed the Electric Car?”

In recent years, electric motor technology has advanced rapidly, most visibly in Elon Musk’s Tesla, which has propelled the resurgence of interest in electric.

“No one buys a car to save the environment,” he said. “I was like, ‘How come there are no electric speed shops?’”

Mr. Bream addressed that deficit with an electric E36 BMW M3 that drew attention in the 2012 Pikes Peak International Hill Climb race. Afterward, when he decided to electrify a Porsche, word got around.

“People started to call me: ‘Hey, we are trying to do this, too,’” he said. A business was born.

Jaguar wasn’t the only company to tantalize vintage-car aficionados with classic conversions. A Volkswagen project that put the carmaker’s electric e-Up guts into a classic Beetle led some to think VW would put conversions into production. In fact, VW had collaborated with eClassics, a shop in Germany, which produced the e-Beetle, reported to sell for $110,000. Availability is unknown. The shop did not respond to a query from The New York Times.

But you can get an electric Bug from Zelectric, a conversion shop in San Diego. It specializes in 1950s and ’60s Beetles and Porsches, which, owing to their rear-engine layout, are among the easiest cars to convert.

Zelectric’s owner, David Benardo, was in advertising when he decided to build his own electric Bug. “I documented it on social media, and people asked me, ‘Can you make me one?’”

Mr. Davis’s Moment Motor Company specializes in converting front-engine, rear-wheel-drive vehicles. It mounts an electric motor to a car’s existing transmission so a driver can still bang through the gears.

Dyed-in-the-wool electric-car enthusiasts say paying $60,000 for a 1960s electric Beetle seems silly, especially when you can find a pre-owned, fully operational electric Leaf, Prius or RAV4 E.V. for less than $5,000.

“It becomes a niche product for the wealthy who can’t live without an electric 1950 Citroën DS station wagon,” said Marc Geller, who is on the board of the Electric Auto Association, an advocacy group founded in 1967. “It’s still crazy expensive to do a conversion, but I hope the day will come when it isn’t.”

Prices are high in large part because one-off installations require one-of-a-kind parts that would be far cheaper if produced in bulk.

“That’s where it is going,” said Mike Spagnola, vice president for product development at the Specialty Equipment Market Association, which represents aftermarket parts manufacturers. “People are working on fitment kits.”

Right now, most of the design effort is going into kits that adapt drivetrains from wrecked Teslas for gas cars. “It’s still in its infancy, but in the next couple of years I think you are going to really see it take off,” Mr. Spagnola said.

Development of cheaper parts may be hastened by the E.V. world’s collegiality. Most of the significant players have worked on projects together.

“In our little micro-niche, there is pretty good communication between the players,” said Jonathan Ward, owner of Icon, a premium retro-modder in Los Angeles. When he sought to convert a 1949 Mercury to electric, “I was very pleasantly surprised by how open the E.V. community has been.”

That cooperation didn’t solve a thornier problem facing conversion shops. Motors, controllers and batteries improve faster than they can install them. Mr. Ward’s ’49 Mercury had to be redone repeatedly over a three-year period.

“Before I could get it out the door,” he said, “key suppliers has second versions, third versions, with significant improvements.”

In fact, the Mercury still isn’t in the owner’s garage. “The software,” Mr. Ward said, “is being upgraded once again.”