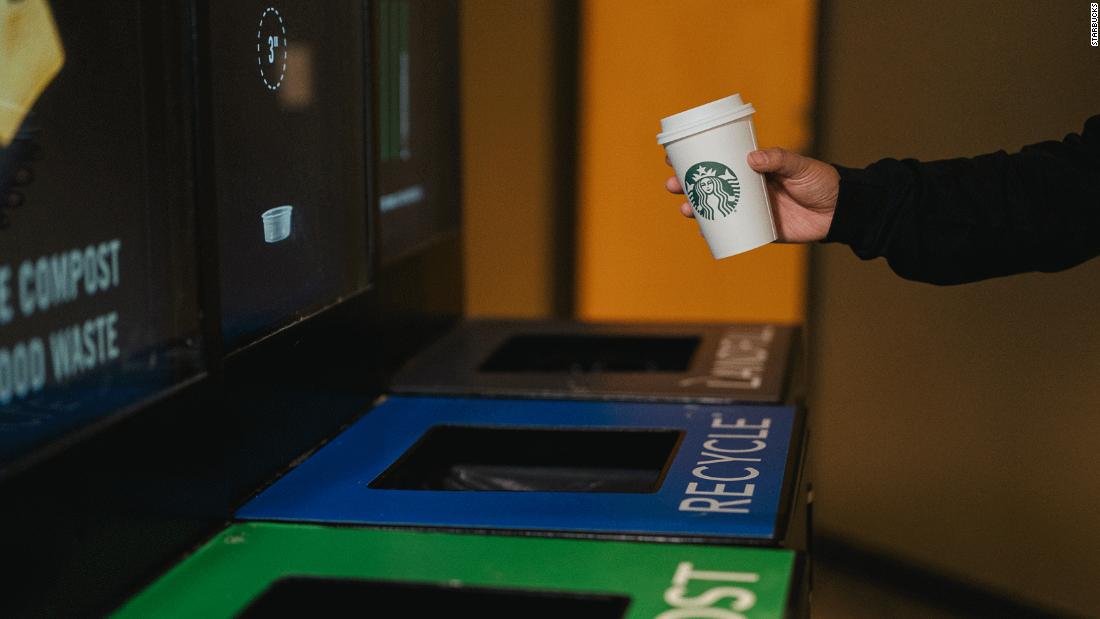 On Monday, the coffee chain started trialing a new recyclable and compostable cup in some locations in New York, San Fancisco, Seattle, London and Vancouver. The new version of the cup is still made from paper, and should look and feel the same as a traditional Starbucks cup. But inside, the vessel is coated with a compostable liner, rather than the plastic one used in Starbucks’ regular paper cups. That means the new cup can be composted in industrial composters, unlike the cups Starbucks uses today.

“Customers will not see any noticeable difference from the current cup,” the company said in a statement discussing the test.

Starbucks has been trying for decades to reduce waste by developing a greener cup. It’s a hard problem to solve: Plastic-lined paper cups are light, stackable and effectively keep liquid from seeping out. And technically, at least, they are recyclable.

Finding alternatives that are functional and cost-effective is tough: Without a broad market for recyclable cups, there’s no incentive to make cheap versions at scale.

But consumers are growing increasingly concerned about the plastic waste crisis, and are looking for sustainable solutions. To appease them, companies are making broad recycling and sustainability commitments and experimenting with reusable packaging.
A few years ago, Starbucks doubled down on its effort to find a more eco-friendly cup by committing to the NextGen Cup Challenge. Starbucks (SBUX), along with food-sector rival McDonald’s (MCD), committed $10 million toward the contest, which was run by recycling-focused investor group Closed Loop Partners. The challenge crowdsourced solutions and named several winning technologies, including the bioliner Starbucks is now testing.

There’s a long road ahead.

Even with the compostable lining, recyclers still have to separate the liner for the cup.

Starbucks is intentionally testing the new cups out in cities with recycling facilities that can do so. But recycling infrastructure in the United States varies from region to region, and it’s hard to know whether something that can be recycled actually is recycled. Starbucks is working with Closed Loop Partners and others to make sure that the cups really are more easily recycled than its traditional products.

It’s not limiting testing to the biolined cups. Other NextGen Cup challenge winners included reusable cups. One, called CupClub, puts RFID chips in cups so they can be tracked and then picked up from drop points to be cleaned and reused. Starbucks, which announced last year that it would test out greener cups, is still exploring other potential solutions.
Reusable cups are a simpler way to cut back waste because they bypass the complex recycling system altogether. Until recently, the chain offered slight discounts when customers brought in their own mugs to encourage using those instead of disposables. But Starbucks has paused the policy, temporarily banning the use of personal cups over hygiene concerns as the coronavirus continues to spread.