Stephen Colbert: ‘Be your own president’ 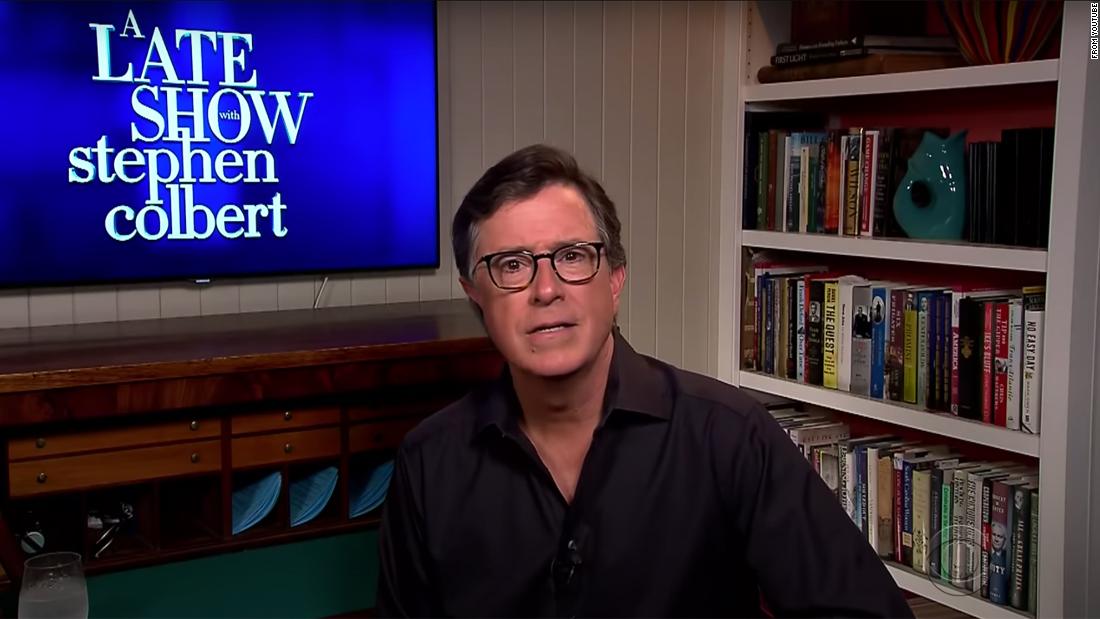 “The Late Show with Stephen Colbert” — a show usually reserved for jokes about current events and celebrity interviews — took on a somber tone Monday night.

“Well, we’re back after ten days off, and I never imagined that, after ten days, a global pandemic would not be the lead story. Remember when we were all afraid of our groceries? I miss those days,” Colbert said opening the CBS broadcast. “The story that has pushed 100,000 Covid deaths below the fold is America’s preexisting condition: racism.”

Colbert, who is broadcasting his show remotely from his home, spent the entirety of his 12-minute opening monologue on the protests as well as talking about actions of President Trump.

“Now, in times like these, we need empathetic and moral leadership,” Colbert said. “Unfortunately, we have Donald Trump.”

Colbert added that addressing “systemic racial and economic injustice” is not only the right thing to do, “it is the safest, most conservative, most self-protecting, most self-serving thing to do.”

Colbert told his viewers to take it upon themselves to “set an example of the kind of country you want to live in” because the White House won’t.

“That might mean going to a protest or making a donation or having a tense conversation about race, but you’re not going to get that from the White House, so we need to step up and provide it ourselves,” he said. “America is now officially B.Y.O.P.: be your own president.”

ViacomCBS (VIACA), the company that owns Colbert’s network, responded to the protests by having many of its stations go dark to “honor George Floyd and pay tribute to other victims of racial violence,” according to a statement by Bob Bakish, ViacomCBS’ CEO.

The blackout took place across ten networks including MTV, Nickelodeon, BET, Comedy Central, CMT and CBS Sports Network. These stations went dark at 5 pm ET on Monday for 8 minutes and 46 seconds — the amount of time Floyd was pinned to the ground.

One of the most notable responses came from Nickelodeon, ViacomCBS’ children and family network. The network not only went dark, but posted a “declaration of kids’ rights” on its official Twitter account.