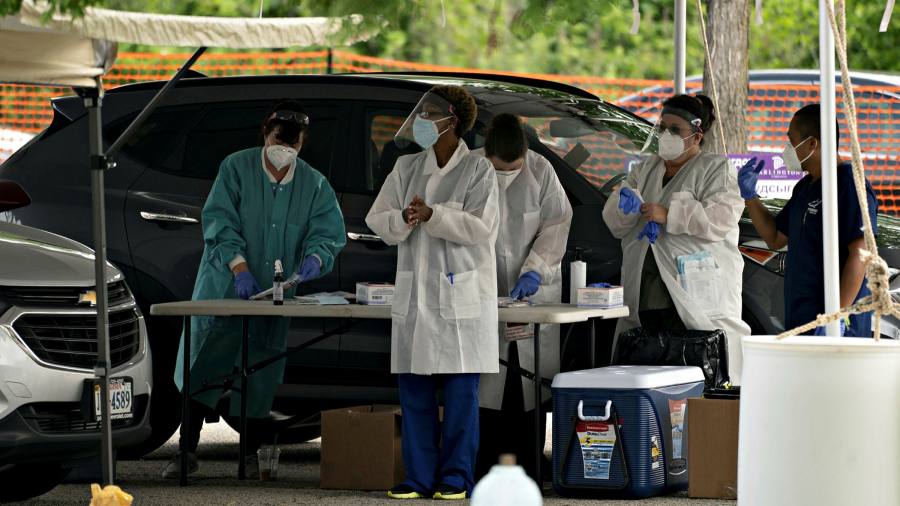 Global markets fell on Wednesday as persistent flare-ups in Covid-19 cases and the prospect of renewed trade tensions between the US and Europe knocked investor sentiment.

Markets in Europe slumped, with the composite Stoxx 600 down 1.8 per cent following a mixed session in Asia. US stock futures dropped 1 per cent.

Stocks extended their losses following a Bloomberg report that Washington was considering new tariffs on $3.1bn of exports from the UK, France, Germany and Spain, in a move that would broaden transatlantic trade tensions just as economies slowly reopen from lockdowns.

The stock market slide followed a sharp rally in Europe on Tuesday, when a closely watched survey of business activity indicated a better than expected recovery in the continent’s major economies in June.

However, traders have said they continue to closely scrutinise the latest figures on the pandemic, with the global tally of coronavirus cases having now risen above 9m and with more than 450,00 fatalities reported.

The US on Tuesday recorded its largest daily jump in Covid-19 cases in two months as Anthony Fauci, a leading member of the White House coronavirus task force, warned Congress the country was experiencing a “disturbing surge” in cases.

“The next couple of weeks are going to be critical in our ability to address the surges we’re seeing in Florida, Texas, Arizona and other states,” Dr Fauci said. Those states were among the first to loosen lockdowns in an attempt to jump-start economic growth.

Other countries have faced rapid rises in their case counts as well, with India’s densely populated capital New Delhi on Tuesday reporting 4,000 new cases in a record rise. Brazil has also emerged as a virus hotspot as authorities have struggled to contain the pandemic.

Nikolaos Panigirtzoglou, analyst at JPMorgan, said the markets were balancing signals of economic recovery against fears of a widespread second wave. “Outbreaks in the US in the south and west have shown signs of growing momentum, as well as in some parts of [Latin America],” he said. However, global data suggested a second wave “might not be as extreme as [the] first”.

Many countries are moving to restrict lockdowns that have dealt a severe blow to economic activity. UK prime minister Boris Johnson announced on Tuesday the reopening of much of the economy, with the hospitality industry, restaurants and pubs in England set to reopen next month.

The picture in Asia was mixed on Wednesday. Hong Kong’s Hang Seng index closed down 0.5 per cent, while China’s CSI 300 benchmark rose 0.4 per cent and Australia’s S&P/ASX 200 added 0.2 per cent.

South Korea’s Kospi climbed 1.4 per cent after North Korea said it had suspended plans for military action against the country, marking a de-escalation in recent provocations.

Overnight in New York, the S&P 500 closed 0.4 per cent higher while the tech-heavy Nasdaq Composite rose 0.7 per cent to a fresh record high.

The three months to June is set to be the best quarter for the S&P 500 in 45 years, according to Bloomberg data, marking a rebound from the 20 per cent dive in the first quarter when Covid-19 struck in the early part of the year.

“It will take more than a slow grind higher in daily new Covid-19 cases to deliver a meaningful market adjustment,” said Robert Carnell, head of Asia-Pacific research at ING.

“There are plenty of options open to countries like the US short of reimposing lockdowns”, he said, such as enforced mask wearing.

Oil prices fell further after declining more than 1 per cent on Tuesday. Brent crude, the international benchmark, slipped 1.3 per cent to $42.10 a barrel while West Texas Intermediate, the US marker, dropped 1.6 per cent to $39.70.