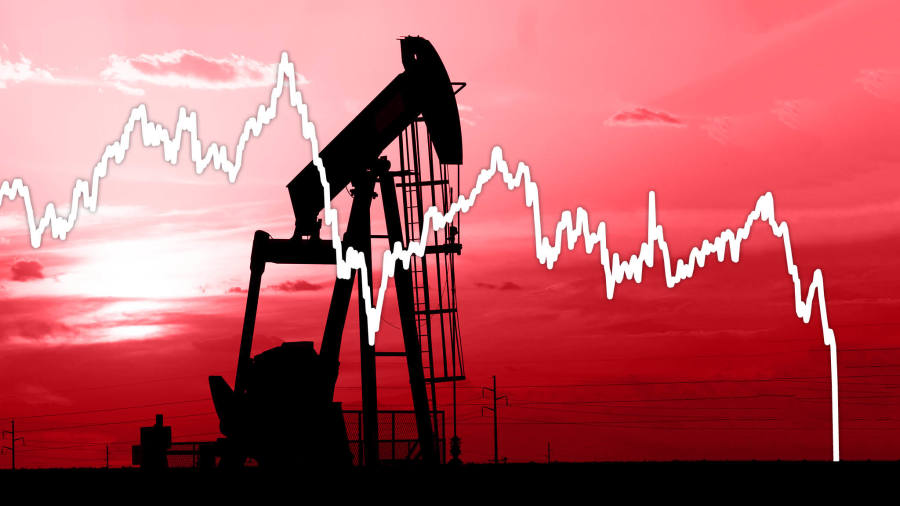 Global stocks tumbled and US government bonds rallied after a crash in the price of oil rocked financial markets already reeling from the spiralling impact of coronavirus.

London’s FTSE 100 fell 6.5 per cent and was on track for its worst day since the 2008-09 financial crisis. Shares on Wall Street were set for significant declines at the open, after futures tracking the S&P 500 fell 5 per cent, the maximum allowed outside of normal trading hours.

The gyrations across markets followed Saudi Arabia’s weekend decision to launch an oil price war, which sent the price of crude falling as much as 30 per cent as the kingdom threatens to swamp supplies. The drop — the biggest since the Gulf war in 1991 — exacerbated two weeks of intense market turmoil caused by escalating concerns over the economic impact of the coronavirus.

Government bonds rallied as investors piled into the relative safety of sovereign debt and braced for more support from central banks, sending US, German and UK yields to record lows.

Jim Reid, a strategist at Deutsche Bank, said the plunge in oil had led to a “complete capitulation” across other asset classes, while analysts at HSBC said the sudden move in oil prices “could not have come at a worse time” for global markets.

The start of trading in European equities markets was tumultuous: dozens of stocks took several minutes to begin trading with others still not trading half an hour after the opening bell. One trader said many stocks were thrown into volatility auctions which are used to smooth out tumult in individual share prices.

Stock markets across Europe tumbled, and Italy’s FTSE MIB lost more than a tenth of its value after 16m people in the country’s prosperous north were locked down in an effort to control the country’s virus outbreak. The Stoxx Europe 600 index, which tracks the region’s largest companies, slid into bear market territory — meaning a fall of a fifth since a recent high.

Trading activity was aggressive with more than a billion shares of major European companies trading hands within the first hour after the opening bell — more than three times the average over the past half-year, according to Bloomberg data.

Major energy groups came under acute pressure. Shares in BP and Royal Dutch Shell lost about a fifth of their value in London trading. Smaller oil companies fell more sharply, with the UK’s Premier Oil collapsing in value by a half. Some of Europe’s largest lenders including Société Générale, Deutsche Bank and UniCredit lost around a tenth of their value. Shares in Wall Street’s biggest banks were poised to fall around 10 per cent at the open.

Joachim Fels, global economic adviser at US asset manager Pimco, said a recession in the US and the eurozone in the first half of the year was now “a distinct possibility” and that Japan was “very likely” already in one.

“The worst for the economy is still to come over the next several months,” Mr Fels added.

The 10-year US Treasury bond yield tumbled down through 0.5 per cent to a record low, in the sharpest rally for American sovereign debt in more than a decade. The 30-year US Treasury yield dropped below 1 per cent, taking the entire US yield curve below that level for the first time.

Investors now face the prospect of the 10-year yield — which stood at 1.5 per cent just 18 days ago — soon joining government bonds in Europe and Japan in negative territory.

Interest rate futures now suggest the Federal Reserve will this summer cut its main interest rate back to the historic lows set during the 2008-09 financial crisis of 0 to 0.25 per cent. The Fed last week slashed rates by half a percentage point — the biggest cut since the crisis — to a range of 1 to 1.25 per cent.

Traders moved into haven currencies, with the Japanese yen gaining more than 2 per cent to hit its highest level against the US dollar in more than three years.

The currencies of oil-exposed countries came under heavy pressure. The Russian rouble fell 7 per cent to Rbs74 to the dollar, its weakest since January 2016. Norway’s krone was down 3.1 per cent at NKr9.6. Earlier it fell as much as 4.7 per cent to its lowest level against the US currency since 1985.

“For growth-sensitive and for oil-sensitive currencies, it’s far too early to pick a bottom,” said Kit Juckes, at Société Générale.

Japan’s benchmark Topix closed down 5.6 per cent, meeting the technical definition of a bear market. The decline was the index’s biggest one-day fall since the 2016 Brexit vote. The yen, seen as a haven during times of market uncertainty, strengthened as much as 3.6 per cent against the dollar to ¥101.57, the highest in more than three years.

The Australian dollar experienced a “flash crash”, plunging almost 5 per cent against the US dollar in just 20 minutes to briefly touch its lowest level since the global financial crisis in 2008. Traders blamed algorithmic trading platforms affecting market liquidity.