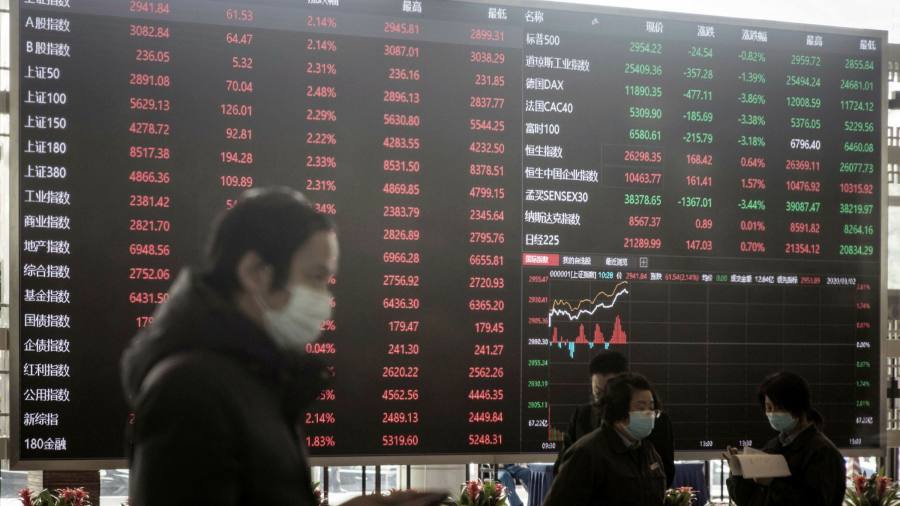 Shares gained on Thursday after positive results from the trial of a possible coronavirus treatment reinforced investor optimism.

The upbeat sentiment also found its way into oil markets as crude continued this week’s gains after Norway announced it would cut production, helping to firm up prices.

In early trading in Asia-Pacific, China’s CSI 300 of Shanghai- and Shenzhen-listed stocks rose 1.4 per cent, while Japan’s benchmark Topix index and Australia’s S&P/ASX 200 both climbed 1.3 per cent. Hong Kong’s market is closed for a holiday.

Overnight, Wall Street’s S&P 500 rallied 2.7 per cent after Gilead Science, the California-based biotechnology company, said that its potential Covid-19 drug remdesivir had produced positive results in a US study. The findings were tentatively endorsed by Anthony Fauci, the US government’s leading infectious disease fighter.

However, some analysts urged caution. “Equity markets are getting ahead of themselves on a day when the run of news was actually pretty negative,” said Robert Carnell, head of Asia-Pacific research at ING. On Wednesday it was announced that the US economy shrank by 4.8 per cent in the first quarter — its worst performance since the Global Financial Crisis.

Stocks have been whipsawed in recent weeks based on the findings of trials of possible coronavirus treatments.

News of the Gilead trial boosted Chinese pharmaceuticals stocks with links to the US company. Shenzhen-listed Porton Pharma, which makes drug ingredients, rose more than 7 per cent. Hainan Haiyao, which has developed active ingredients for remdesivir, added 5.3 per cent. Zhejiang Yongtai Technology, which has held talks with Gilead about supplying raw materials for the drug, rose 6 per cent.

Strength in China’s equity markets on Thursday came as data showed the recovery in the country’s services sector in April was stronger than expected. But the non-manufacturing purchasing managers’ index also revealed that demand for Chinese products abroad has continued to shrink as the coronavirus hits other parts of the global economy.

Oil markets were also supported on Thursday by Norway’s decision to reduce its crude production in June for the first time in nearly two decades by 250,000 barrels per day, or more than 13 per cent of total output.

Brent crude, the international benchmark, rose 3.9 per cent to $23.42 a barrel. West Texas Intermediate, the US marker which this month traded in negative territory for the first time in history, rose 7.6 per cent to $16.21.

Futures markets pointed to a slightly higher open on Wall Street, with the S&P 500 set to rise 0.1 per cent when trading begins later today.