Stores want shoppers to wear masks. But some customers refuse 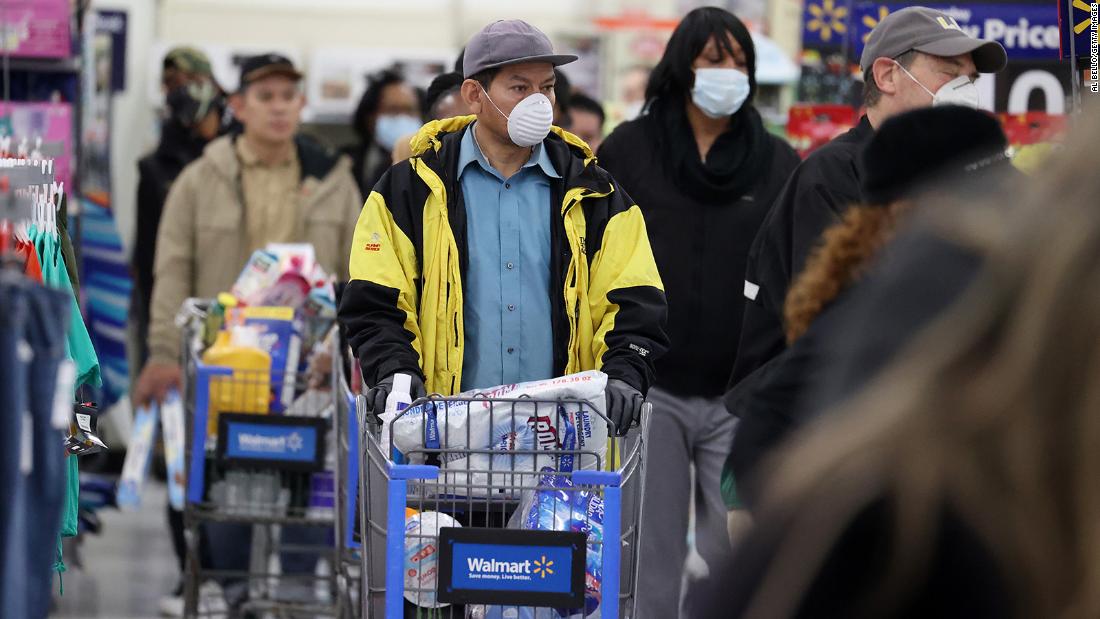 But retailers are struggling with how to convince their customers to follow the requirements. Major chains have yet to ban those who don’t put on masks, even as labor advocates push for more protections for frontline workers.

Stores are reluctant to antagonize shoppers by turning them away.

Wegmans, for example, wants to minimize “the likelihood of conflicts in our stores” and will “not put our people in the position of having to deny entry to our stores,” even in states where masks in public settings are required, a representative said.

At Stop & Shop, workers are telling customers who don’t wear masks in the states where they are required to “expedite their shopping trip, and then requesting that they wear a mask next time,” a spokesperson said.

However, anxious workers and their allies are calling for policies ordering customers to wear masks or face coverings to protect them and other shoppers from the virus. The virus can spread between people interacting in close proximity, even if people do not display symptoms, according to the Centers for Disease Control and Prevention.

‘Not the mask police’

Decisions around customers wearing masks are playing out against the backdrop of more grocery and retail workers getting sick from the virus and dying; some states planning to reopen retail stores that have been shuttered during the crisis; and mixed signals from public officials.

More than 60% of Americans report that they have worn a mask on their face outside of their homes, Gallup said Friday.
Several smaller grocers have started requiring that all their customers wear masks inside stores, yet larger chains like Walmart (WMT), Target (TGT), Whole Foods, CVS (CVS) and others have stopped short of this step.

“It can be a bit more difficult to enforce this requirement in parts of the country where it’s not mandatory,” said a Walmart spokesperson. The company wants to “avoid situations that may create a confrontation” with workers.

Some grocery workers believe that their companies’ failure to make shoppers wear a mask puts them at risk.

“They allow the customers to freely walk around the store without masks,” said Dionna Richardson, a cashier at Ralph’s grocery store in Los Angeles and a member of the United Food and Commercial Workers union. Los Angeles has required that customers wear a mask or covering in stores, but Richardson said Ralph’s was not enforcing the regulation. Ralphs is owned by Kroger (KR).

Richardson said she asked a customer to wear a mask, but was reprimanded by her store leader. “I was told that it was none of my business and that I was not the mask police.”

A representative for Ralph’s did not comment on Richardson’s account, but said Ralph’s requires customers to cover their faces and states its policy on signs posted on the front door of all stores.

“If a customer attempts to enter our store without a face covering, they are directed back to their vehicle to retrieve their face covering or something suitable to cover their mouth and nose,” the representative said. “A store leader may also provide a face mask for the customer to use, where available, for free.”

Their requirements differ, however, and most do not come with a penalty for either shoppers or stores.

Nellie Brown, director of workplace health and safety programs at Cornell University’s Institute of Labor Relations, said if a state has made requirements on masks, “that would take precedence.” However, “if a state were silent on the issue, the store could make its own requirements.”

She believes a “mask requirement of customers would protect employees, as well as other customers.”

But a handful of smaller grocers around the country are prohibiting customers from shopping without a mask, even where it’s not required, including Nugget Market, a chain of 15 stores in California.

“I know this might upset a few of you and I apologize in advance, but this will offer all of us the most protection!” CEO Eric Stille said in a statement on April 8. “Extreme times call for extreme measures and I feel this is what’s best to help curb the spread of the virus and protect us all.”
In Memphis, Cordelia’s Market is requiring customers to wear masks.

“We have a fair amount of not only customers, but also elderly employees,” said grocery manager Angelina Mazzanti. “We know that we’re going to have some pushback from customers.” Customers can buy a mask or bandana at the store if they don’t have one, she added.

Smart & Final, a chain of more than 300 stores in California, is also doing this.

“If a customer doesn’t have a mask or face covering, we politely ask them to return with one or they can purchase one in our store,” a spokesperson said.