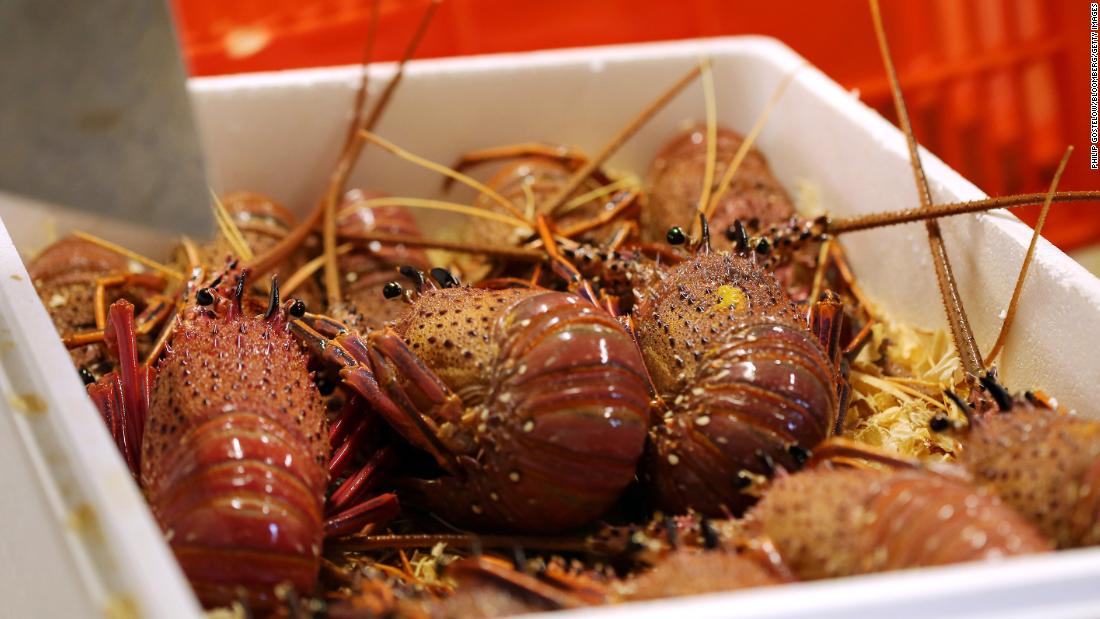 The food we eat, the work we do and the clothes we wear — many are daily reminders of the vital role China plays in the global economy.

In Western Australia, the fishing season had only just begun when the Geraldton Fishermen’s Co-operative was forced to stop buying its members’ rock lobsters, which it would have exported to China for the Lunar New Year, the industry’s busiest period. Demand “had essentially dropped to zero,” the co-operative’s spokesperson Shaun McInness told CNN.

“Within our industry, live product has remained in tanks in facilities up and down the WA [Western Australian] coast,” he said.

“The impact that the coronavirus is having on people in China is beyond what many of us can comprehend, but there has been an economic effect felt within our industry as well.”

The co-operative’s members catch 6,600 tons of rock lobster each year, their quota, more than 90% of which is usually exported to China.

It was forced to cut its buying price to $0, a move that stops fishermen from bringing in lobsters than it can’t sell on.

Prices across the country are slowly creeping back up but they are still at around $30 a kilogram, around half of the average price, meaning Australians are enjoying the crustaceans at cut prices, while some stocks are being frozen and others are going to alternative international markets.

Steve Tsang, director of the SOAS China Institute, said it would be impossible to quantify the full economic impact of the coronavirus because China has become entwined with so many industries.

This interconnectivity and development in China has happened at an “absolutely phenomenal” pace since the country began economic reforms in the late 1970s under the leader Deng Xiaoping, Tsang said.

“When Deng Xiaoping started the reform from 1979, China’s economy looked a bit like North Korea’s today,” said Tsang. “They were so much behind technologically, industrially, in all kinds of capacity. It went at a pace that’s gone beyond the wildest imagination that Deng Xiaoping had when he set very ambitious targets for China.”

To put this growth in perspective, in 1970, China’s GDP was less than $100 billion, World Bank data shows. The Unites States by that time had just passed the $1 trillion threshold.

The gap between the economies of China and the US is narrowing. Reaping the benefits of globalization, China’s GDP is now roughly $14 trillion, although it is still some way off the United States’ $21 trillion economy.

This remarkable transformation has seen the country transform from the ground up, with more than 800 million people hauling themselves out of poverty, World Bank data shows. Although wealth inequality and human rights violations for some groups are persistent problems, the average Chinese person’s quality of life has substantially improved during the last four decades. Many older Chinese people who were never able to leave the country in their youth can now travel easily. China is now the world’s largest market for outbound travel and the world’s largest spender on international tourism — it’s no wonder the global industry has been so badly hit.

The most significant effect the virus has had on the global economy is a slowdown in supply chains. Apple alone lost $34 billion off its market value overnight recently, after the company announced the virus had made it impossible for it to meet its quarterly targets. It cited supply chain issues as a major factor.

But small businesses are also struggling with sourcing from China. In London, Jay Sylla-Johnson sells extensions, wigs and weaves made of human hair, through her online company Tresse de Luxe Hair. Around 90% of her products come from China.

She hasn’t been able to source any new products for nearly a month, as her suppliers have been unable to commute to their factories, many of which were closed anyway. Entire cities and transport links came to a standstill for weeks as the Chinese authorities scrambled to try to contain the virus. Some factories she buys from are only now slowly getting back to work. Many others are still closed.

“A lot of workers who usually travel to Guangzhou couldn’t get back because of the virus. They weren’t sending messages, they couldn’t make products, there was no transport. One company that usually goes around China hair collecting couldn’t go to the right provinces because of transport problems,” Sylla-Johnson said.

Because of fears that marketplaces are breeding grounds for viruses, human hair markets have been temporarily closed, Sylla-Johnson’s suppliers have told her.

She also sources hair products from Vietnam and Cambodia, but they too have slowed production as they rely on China for supplies to put the extensions and wigs together. She is considering boosting her import share from India to decrease her reliance on Chinese exports.

“Since the virus, the price of hair extensions in China has hiked. Some suppliers are saying they are starting now to ship, but there’s a fee added, so something that was $750 is now $770,” she said, explaining that such a price difference could eat significantly into her profits.

In New Jersey, the CEO of Mon Cheri Bridals, Steven Lang, says he has struggled to make good on several orders. His business sells bridal gowns and dresses for high school proms. Out of 45 of the company’s China factories, only half are in operation. The others are waiting to be inspected and disinfected.

He said his company was doing everything it could to let brides-to-be and prom-goers down gently, offering different dresses at lower prices where possible, or full refunds.

“Weddings and proms, they’re emotional issues and we’re working overtime to fill all those needs, but people are just going to have to understand that for some areas of the world, this is a life or death situation. If you don’t get the dress of your dreams, it’s very powerfully, emotionally damaging, but you’re not going to lose your life over it,” he said.

Lang has already begun diversifying out of China, buying from factories in India, Vietnam and Myanmar, but even then, he said, so many of the materials still depend on Chinese producers.

“It is affecting everything in the supply chain, and of course, China is the home of labor, and that’s what we’re importing — we’re importing labor, not just product, and without the workers the entire chain is affected,” he said.