Strike for Black Lives demands union rights for workers at McDonald’s, Amazon, Uber and others 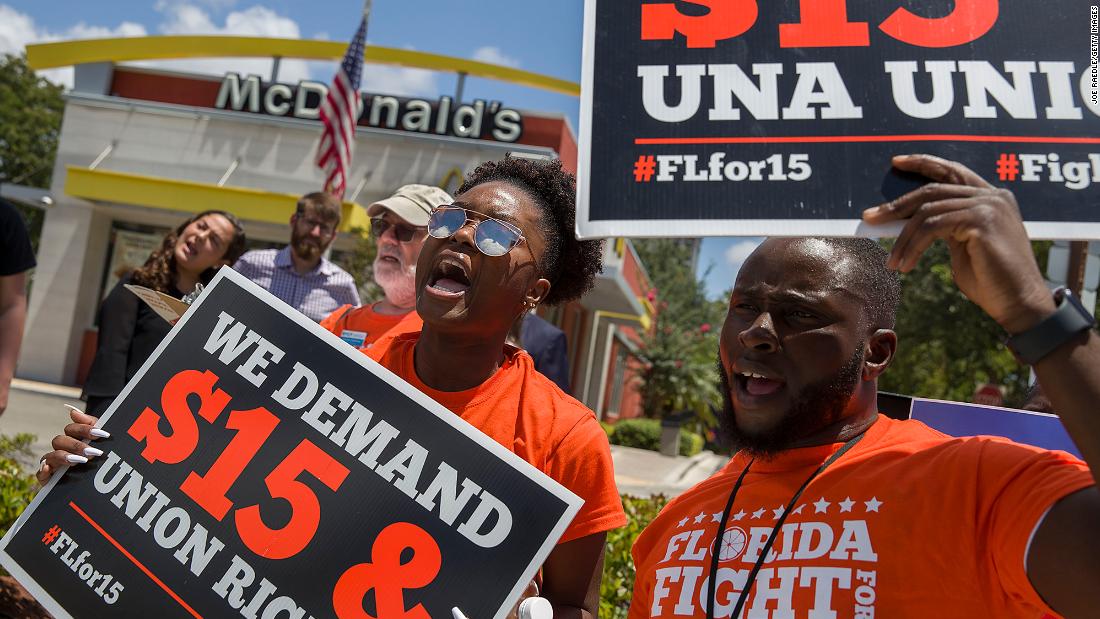 Thousands of workers are expected to walk off the job in more than 25 cities on July 20 in a mass demonstration called the Strike for Black Lives, organizers say. The strike takes aim at various industries in which Black workers are disproportionately represented, including fast food, airports, gig workers, nursing and home health aides.

The protest is being organized by the Movement for Black Lives — a coalition of black advocacy groups — and several labor rights organizations, including the Service Employee International Union and the fast-food industry labor advocacy group known as Fight for $15 and a Union. The American Federation of Teachers, the International Brotherhood of Teamsters and United Farm Workers are also involved in the effort.

Chief among the workers’ demands is that their employers raise wages and let their employees form unions to advocate for improved health care, sick leave and other benefits.

Richard Wallace, a Movement for Black Lives leader, says his organization supports unions because they provide a pathway to more competitive wages and benefit for Black workers.

“You can’t pay people minimum wage for a job, knowing it’s not a living wage, knowing that [a plurality] of your workforce is black, and then come out and say, ‘Black Lives Matter,'” he told CNN Business. “A collective bargaining agreement is the only ironclad way of ensuring those values that they’re promoting in this moment are held onto in perpetuity until the contract is resolved.”

Since the coronavirus crisis began, the SEIU and Fight for $15 have been organizing demonstrations across the country in support of essential workers who say they have been forced to work without personal protective equipment and, in some instances, have caught Covid-19.

Both labor groups are fighting for union rights in workforce sectors where Black employees are overrepresented.

“Many corporations have been quick to claim that Black Lives Matter, yet they refuse to take concrete action to protect the health and economic security of their Black workers,” SEIU President Mary Kay Henry told CNN Business.

McDonald’s (MCD) reaffirmed its support for Black Lives Matter in a statement to CNN Business, but declined to directly address to questions about its workers forming a union.

“With one of the most diverse workforces in the world, we believe Black lives matter, and it is our responsibility to continue to listen and learn and push for a more inclusive society by being open, honest and candid,” a McDonald’s spokesperson said in an emailed statement.

Uber (UBER) and Lyft (LYFT) did not immediately respond to requests for comment about the Strike for Black Lives. The companies have issued public statements showing support for black police brutality victims or the Black Lives Matter movement while starting programs to benefit Black Americans in recent weeks.

Black workers on the front line

Black Americans make up about 13% of the US population, but nearly 20% of workers in the nation’s food preparation and serving sector, which includes fast-food employees, according to the US Bureau of Labor Statistics. About 18% of Uber drivers and 17.6% of Lyft operations workers are Black.

BLS data also shows more than 37% of the country’s nursing, psychiatric, and home health aides are Black. Many of those aides have been risking their own health to provide care to others while they themselves aren’t provided with health insurance by their employers.

Sepia Coleman is a certified nursing assistant and home health aide from Memphis, Tennessee. She says she can’t leave work to strike on July 20 but she plans to join the protest in solidarity after her shift.

Coleman says she was fired by her last nursing employer, which she asked CNN Business not to name, after she threatened to go public after she and several other nurses who work there were diagnosed with Covid-19.

In June, Coleman was hired as a nurse by another health care company, but she won’t be eligible to receive company health care benefits for 90 days. At the moment, she’s one of many home health workers providing care for others at the risk of catching Covid-19 while she herself doesn’t have health insurance.

“I go to work every day, I pray and make sure I do what I have to do to keep out of harm’s way,” Coleman said. “I say to myself, ‘If I do get it again, I just pray to God I can recover from it.’ If we had union rights, we’d be able to negotiate that so that we have insurance from the day we start.”

African Americans also make up more than 26% of the warehouse workforce at Amazon.
Recently the e-commerce giant has fired multiple employees involved in labor rights protests, though the company maintains those employees were let go for unrelated reasons.
Amazon has faced criticism from groups like Athena, a coalition of workers’ rights groups and other advocacy organizations pushing the the company to grant higher wages and benefits to its disproportionately Black workforce.

A spokesperson for Athena said the organization is considering participating in the Strike for Black Lives as well.

“What remains true across these industries is their enormous fortunes have been amassed directly from the labor of Black and brown workers,” Myaisha Hayes, campaign director at MediaJustice, a core member group in the Athena coalition, told CNN Business via email on Thursday.