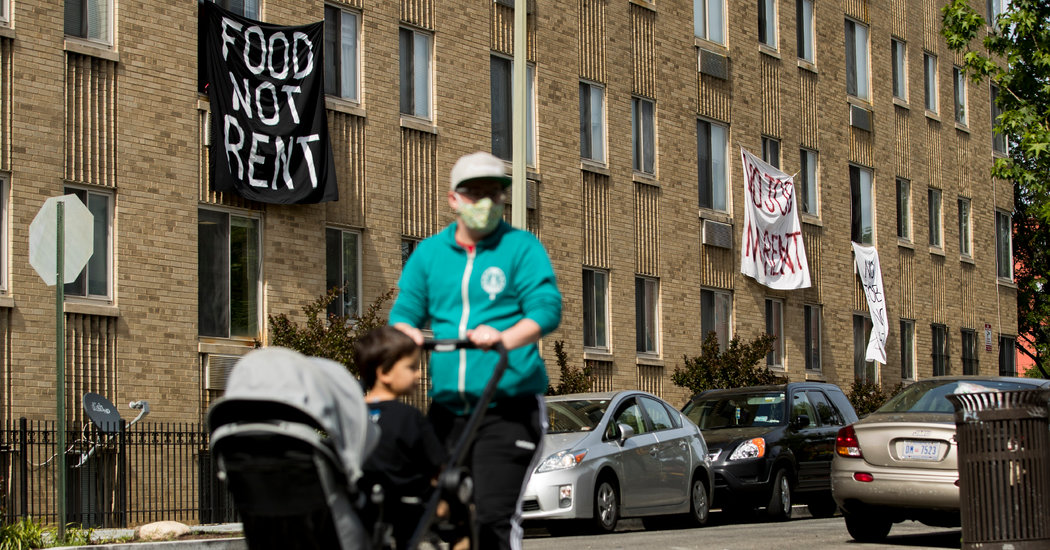 Since April, landlords have looked to the first of the month fearing that tenants will stop paying their rent. For the most part, that has not happened. Despite a 14.7 percent unemployment rate and millions of new jobless claims each week, collections are only slightly below where they were last year, when the economy was booming.

The trend cannot continue without a swift and robust recovery, which is becoming increasingly unlikely, or without another big injection of government money, which Senate Republicans say is not happening anytime soon. American households were struggling with rent long before the economy went into free fall, and there are signs — from an increase in partial payments to surveys that show many tenants are putting rent on their credit cards and struggling to pay for essentials like food — that this pressure is building.

There are cracks under the surface.

When the coronavirus outbreak started shutting down the economy in March, there was widespread fear that millions of tenants would fall behind on their monthly bills. Renters were already struggling with housing costs, with a quarter of tenant households paying more than half their before-tax income on rent and utilities, and the loss of jobs and hours seemed almost certain to worsen those troubles.

Much of the available data has told a different story. In April, the National Multifamily Housing Council started releasing weekly rent tallies, and aside from a substantial dip in the first week, the rates have been only slightly below where they were last year. Through May 20, landlords in the council’s survey had collected 90.8 percent of rents, compared with 93 percent a year earlier. A similar story has played out in state surveys and earnings reports from real estate investment trusts like Mid-America Apartment Company and Equity Residential.

But many of these numbers skew toward higher-end buildings. Other surveys show that buildings with poorer tenants have lower collection rates. Meantime, deferrals and partial payments appear to be increasing: Apartment List, a rental listing service, said 31 percent of respondents failed to make the full May payment on time, up from a quarter the month before. Hoping for a swift recovery, many landlords are telling tenants they can pay later, knowing this often won’t happen.

“Landlords and renters will share in the pain,” said John Pawlowski, an analyst with Green Street Advisors, a real estate research firm in Newport Beach, Calif. “We just don’t know what the sharing balance will look like.”

New Story, a San Francisco-based nonprofit organization that builds and finances affordable housing, recently raised $2 million to help renters struggling to make their bills because of coronavirus-related job losses. Alexandria Lafci, a founder of the organization and its chief operating officer, has spent the last few weeks calling landlords to haggle on behalf of tenants.

“I called 21 properties and got eight yeses with an average of 20 percent off,” she said. Only three landlords rejected any accommodation, with the rest agreeing to arrangements like lower payments for the next three months or shaving down past-due balances to give tenants a break without lowering their advertised rents.

Smaller landlords and affordable housing are in trouble.

Rental housing is a fragmented business, with purveyors ranging from publicly traded corporations that own tens of thousands of units to operators of only one or two. And falling rent collections are more likely to affect smaller landlords, who tend to have a limited financial cushion and less capacity to borrow.

These landlords play an important role in the housing system — especially for lower-income tenants. Individual investors own about half the supply of low-cost units, and many are what housing advocates call “naturally occurring affordable housing,” or homes and apartments that carry below-market rents even without a subsidy, according to the Joint Center for Housing Studies at Harvard. These units, which overwhelmingly consist of small apartment buildings and single-family homes, are also more likely to have tenants affected by the coronavirus, with more than half of renters in the hardest-hit occupations living in single-family homes and duplexes, according to the center.

Naturally occurring affordable housing is often overlooked, but these units are crucial. Government housing programs like Section 8 rental vouchers and the Low-Income Housing Tax Credit do not come close to satisfying the demand for lower-cost housing. This is why cities have yearslong lists for vouchers and lotteries for the tiny number of newly built subsidized units.

Getting such housing is laborious and invasive, and it leaves out workers like undocumented immigrants and families whose incomes put them just beyond the threshold to qualify. Naturally occurring affordable housing is in a sense more valuable, because it represents units that anyone — someone switching jobs or fleeing an abusive spouse, for instance — can find on Craigslist.

This housing can also be easily lost, not because it disappears, but because it is purchased by a homeowner or investor who renovates in hopes of increasing rents. This is what has happened over the last two decades: Since 2014, according to Harvard’s Joint Center, the nation has lost about 2.7 million affordable units, defined as those carrying rents less than $600.

Carline Chery, 50, owns three Boston duplexes. Two-bedroom units go for $1,800, more than what the lowest-income renters can pay but roughly $900 less than the typical rent in the metropolitan area, according to Zillow. Compared with a public company, Ms. Chery runs a shoestring operation, with no reserves and little capacity to absorb a missed month.

So when tenants in one of her buildings recently stopped paying, she borrowed from family members to make the mortgage payment, then put the building up for sale. The strongest interest has come not from another landlord, but a first-time home buyer.

Fearing a surge in homelessness, state and local governments spent March and April instituting triage measures, like bans on evictions and utility shutoffs, along with limited subsidies for struggling renters. The CARES Act also offered aid to public-housing providers and grants to state governments that could be used for rental assistance.

Since then, tenant activists have unified around a cry of #CancelRent, staging car rallies and roadside protests to demand that the government halt rent and mortgage payments — without the accrual of back payments — as long as the economy is battered by the coronavirus. Representative Ilhan Omar, Democrat of Minnesota, introduced a bill that roughly mirrors that desire.

Although the bill has little chance of passing, housing advocates and landlords’ groups have pressed for more direct help to renters. The CARES Act allotted $12 billion in housing grants to cities, homeless shelters, affordable-housing providers and states, but the money was largely directed to renters and landlords in public or subsidized housing. That leaves out most moderate- and low-income tenants who live in market-rate developments, and small landlords like Ms. Chery, whose loans are held by private lenders and not backed by the federal government.

The House of Representatives recently passed the $3 trillion HEROES Act, which in addition to more financial stimulus to households included $100 billion in rental subsidies for tenants affected by coronavirus-related job loss. That bill has no prospect of Senate approval, but landlord and tenant groups continue to push for expanded aid for tenants.

“Small landlords and renters depend on each other, and both need emergency assistance to stay afloat during this time,” said Diane Yentel, chief executive of the National Low Income Housing Coalition. “Without it, we will end this crisis having saddled low-income renters with more debt, and having lost more of our country’s critical housing stock.”