Tensions between China and India are spilling over into global business 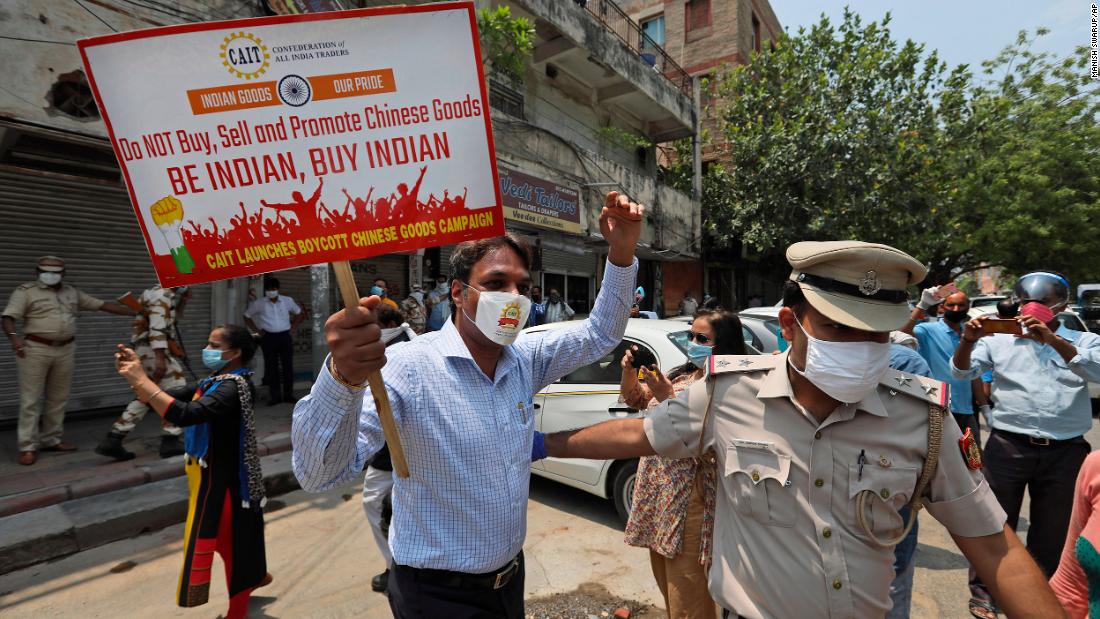 This week, trade organizations said that Chinese shipments were suddenly being held up at Indian checkpoints, highlighting growing strains in a vital trading relationship after the countries clashed in a deadly border battle more than a week ago.
The India Cellular and Electronics Association (ICEA) — which represents Apple (AAPL) and Foxconn, among other companies — complained to India’s Ministry of Finance on Tuesday that all electronic imports from China were being scrutinized at ports in India “without prior warning.”

“There was refusal to clear followed by delays, and now, talk about 100% examination,” ICEA chairman Pankaj Mohindroo wrote in a letter to the ministry. “The logistics of seamless movement is in total disarray.”

The timing is especially stressful because businesses have already been suffering from production snags and other disruptions due to the coronavirus pandemic, noted Mohindroo. He estimated that the sector “has only recovered to less than 40% of normalcy.”

“In the normal dispensation, goods are cleared automatically without examination,” Mohindroo wrote. “We have just begun to limp back to normal after a massive set of losses for three months — and now this.”

The Ministry of Finance declined to comment to CNN Business about the letter.

Other trade organizations are worried too. The Chennai Customs Brokers Association, based in southeastern India, said Tuesday that authorities have been instructing freight handlers across the country “to hold all consignments which have originated from China.”

Shipments are now expected to be placed “under hold and subject to a reexamination before release,” a representative for the group wrote in a notice to members. While there has been no official notice about the new practice, the association warned businesses that there could be delays clearing cargo at ports, airports and customs stations across the country.

Prior to last week’s border skirmish, growing anti-China sentiment in India had already led to calls for a boycott of Chinese products and services, while new rules on foreign investment were expected to constrain China’s ability to cash in on India’s internet boom.

Then the fight at the border happened. Twenty Indian troops died in the violent exchange, sending China and India into a tense diplomatic and military standoff.

The economic stakes are high. India imports more goods from China than any other country. And India and China have enabled each other’s rise as technology powerhouses.

In another sign of fraying ties, local authorities in India announced this week that they were hitting pause on more than $600 million in deals with Chinese companies, including one with automaker Great Wall Motors.

A minister for the state of Maharashtra said that officials were waiting for India’s central government to assess the current business climate and announce a clear policy about how to move forward on deals with Chinese firms.

On Thursday, some hotels in New Delhi announced that they would turn away all Chinese guests because of the international spat. The move may be largely symbolic, given that the Covid-19 pandemic has severely restricted travel between countries.

“We have … decided not to give any room to any Chinese national at a time when China is repeatedly in attacking mode on our brave Indian forces,” Mahendra Gupta, general secretary of the Delhi Hotel and Restaurant Owners Association, wrote in a letter to another trade organization.

The group has also vowed to stop using “any Chinese products” at its businesses, and threatened to contact “hotel associations of other states to make similar decisions.”

It’s not the only organization that has stepped up its rhetoric against China.

The Confederation of All India Traders (CAIT), an organization that represents millions of small brick-and-mortar stores, is also urging Indians to boycott Chinese goods.

Last week, the group released a list of more than 3,000 Chinese-made products it wants consumers to abandon. The goal of the campaign, it said in a statement, is “to reduce India’s dependence on China for these goods.”

The organization has also called on dozens of business leaders around the country to join the campaign, including Mukesh Ambani, the country’s richest man. Ambani’s conglomerate, Reliance, did not immediately respond to a request for comment on Friday.

CAIT activists are pressing online shopping companies in India to start showing the “country of origin” of products sold on their portals, calling it “a crucial element” in their campaign.