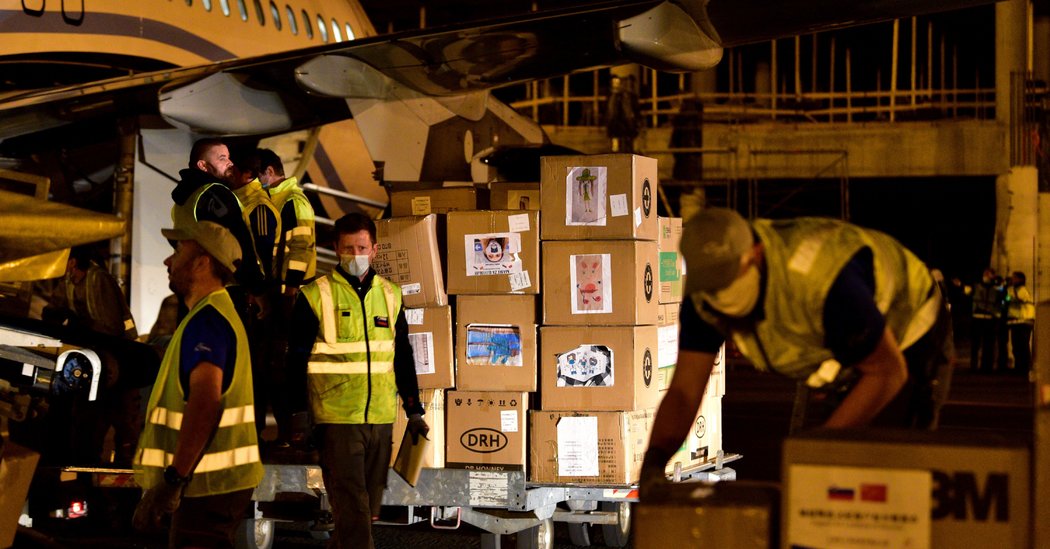 WASHINGTON — When President Trump spoke with Xi Jinping, the Chinese leader, late last month to reach a truce to the sniping over the coronavirus pandemic, he did so partly to pave the way for steady shipments of much-needed medical supplies from China.

But as the death toll in the United States has surpassed 23,000 and hospitals still struggle with equipment shortages, American officials and executives point to new problems in buying equipment or taking donations from China.

Shipments have run into unexpected delays as Chinese officials impose new regulations in response to complaints of low-quality products. And some American officials remain reluctant to accept gifts of gear because they fear giving the Chinese Communist Party a propaganda win.

The two superpowers are vying to project global leadership roles during the crisis, despite deep failures in how senior officials in both nations responded to outbreaks. At the moment, Chinese officials have the power to make it easy or difficult for vital supplies to flow to the United States and other nations. The two sides must work closely to orchestrate the shipments, even as American officials harbor deep suspicions over China’s “donation diplomacy,” a global effort by Beijing involving planeloads of medical gear and delegations of health experts.

The complications could bolster the arguments of some Trump administration officials that American companies should move their supply chains out of China.

On Monday, Mr. Trump signaled in a news conference he may be ending the détente with China when he used the term “Wuhan virus,” a label despised by Beijing that emphasizes the city where the virus was first detected.

Chinese regulators, embarrassed by reports of shoddy medical equipment sent to Europe, imposed a new rule on Friday mandating that customs officers inspect every shipment of masks, ventilators and other medical gear before they leave the country. That was the latest in a series of regulatory actions that had begun to hinder shipments. One American businessman said a new list of items to be inspected was so broad that it even included cotton balls. American officials said that after hearing complaints from U.S. companies, they have had to scramble to deal with the delays on a case-by-case basis.

In some cases, the Chinese authorities eventually helped untangle the snarls. But the bureaucratic bungling has exasperated American officials, who say the red tape has held up equipment at a desperate moment.

American executives are increasingly complaining of delays. Charter planes from the United States have sat empty in China for days. Millions of masks and thousands of ventilators have sat on factory and warehouse floors, sometimes for weeks.

Jacob Parker, senior vice president at the U.S.-China Business Council, said the restrictions were “the top issue for some of the biggest companies in the world.”

“It is a good intentioned policy that has a variety of unintended consequences across a variety of areas,” he said. “It remains a big issue for our members.”

Zhao Lijian, a Chinese Foreign Ministry spokesman, said Friday that Beijing would work with other nations “to safeguard international public health security.” The country exported more than $1.4 billion of pandemic supplies from March 1 to April 4, he said, and scores of countries had signed contracts.

However, many of the shipments are part of regular, long-term commercial arrangements between foreign companies such as 3M and factories or contractors in China.

The State Department appears determined to compete with China on publicity over aid. Its website says it has given nearly $500 million in foreign aid to help with the pandemic. Last week, Secretary of State Mike Pompeo said in a call with reporters in Europe that “there is no country in the world that will provide as much aid and assistance through multiple forms as the United States of America will.”

One new rule in China dictates that supplies heading to the United States must have approval not just from the U.S. Food and Drug Administration, but now also from China’s National Medical Products Administration, which many importers do not have.

The regulations have threatened to disrupt ventilator supply chains for companies like General Electric and have impeded shipments of masks ordered by the Federal Emergency Management Agency, according to people familiar with the matter. Earlier this week, a plane bound for Massachusetts took off with less than half of the 10 million masks it was supposed to bring back. Several major makers of virus tests have struggled, too. One, PerkinElmer, has had a large shipment delayed for days, the people said.

But it is American officials who are responsible for the stalling of one batch of gear. For weeks, officials in Washington have debated whether to accept a donation of masks from the Chinese Foreign Ministry, American officials said. Though medical workers are desperate for the masks, some officials argue that taking the donation would aid China’s propaganda campaign.

That debate is a sign of the growing fury and frustration in Washington over that campaign. American officials who see the Chinese Communist Party as malevolent are irate at what they view as the party’s efforts to reshape the narrative of the pandemic, which spread quickly beyond central China in part because of cover-ups by officials. (The State Department did not reply to questions on the offer or its position on donations from China.)

The American officials say China is trying to turn the spotlight away from the pandemic’s roots through the shipments of purchased supplies and some donations. Often, Chinese officials tell counterparts abroad that they must publicly thank China in return for the shipments, say Western officials, executives and analysts with knowledge of the exchanges.

“What is most striking to me is the extent to which the Chinese government appears to be demanding public displays of gratitude from other countries; this is certainly not in the tradition of the best humanitarian relief efforts,” said Elizabeth C. Economy, director for Asia studies at the Council on Foreign Relations. “It seem strange to expect signed declarations of thanks from other countries in the midst of the crisis.”

The equipment has helped save lives, and officials around the world — among them, Gov. Andrew Cuomo of New York — have thanked the Chinese government or private citizens.

Some Chinese officials abroad have been surprisingly aggressive in pushing Beijing’s narrative.

Twice since late February, a Chinese diplomat in the consulate in Chicago has emailed State Senator Roger Roth, president of the Wisconsin Senate, to ask that the Wisconsin Senate pass a resolution recognizing that China has taken heroic steps to fight the virus, according to reviews of the emails by The New York Times.

The emails had proposed drafts of the resolution that included lines saying “China has adopted unprecedented and rigorous measures” and that the actions “have been effective in curbing the virus from spreading to other parts of China and the world.” One sentence said China had been “transparent and quick” with sharing information.

“I was really taken back at the brazenness of their government to try and influence what we’re doing here,” said Mr. Roth, a Republican.

Mr. Roth sent back a one-word reply — “Nuts” — and on March 26 introduced a resolution in the State Senate that said the “Communist Party of China deliberately and intentionally misled the world on the Wuhan coronavirus” and that Wisconsin stood “in solidarity with the Chinese people to condemn the actions” of the party. The Wisconsin Examiner first reported on the resolution.

The diplomat, Wu Ting, did not reply to a request for comment.

“Beijing may come to regret its rapid pivot from domestic crisis to international triumphalism, for there is already a rising tide of nationalist anger coming its way as citizens from countries around the world face prolonged economic hardship and are in search of culpable parties,” said Jude Blanchette, a China scholar at the Center for Strategic and International Studies.

China’s new regulations on exports could also hamper its own propaganda efforts, even if the purpose of the rules — to ensure that only functional medical equipment leaves China — is a valid one.

And the start-and-stop nature of the shipments is adding momentum to a yearslong push by some American officials to enact policies intended to compel American companies to move their supply chains.

Some American companies have already relocated their supply chains out of China in response to the tariffs Mr. Trump imposed as part of the trade war he started in 2018. Now, both the economic shutdown in China during the pandemic and the global shortage of Chinese-made medical products are increasing the calls for more “decoupling.”

Peter Navarro, a White House trade adviser and China hawk, has drafted an executive order to prod American pharmaceutical companies to move manufacturing to the United States, though some administration officials and lawmakers oppose the effort.

“One of the things that this crisis has taught us, sir, is that we are dangerously overdependent on a global supply chain,” Mr. Navarro said last week during a news conference with Mr. Trump. “Never again should we rely on the rest of the world for our essential medicines and countermeasures.”

Some American officials point to the potential for local governments in China to seize vital personal protective equipment produced there as part of the supply chains.

For instance, officials said, 3M, the American manufacturer, could struggle to hit a target it brokered with the Trump administration to supply 166.5 million masks over the next three months if Chinese authorities chose to seize masks produced in the country for their own needs.

A recent article in Chinese state media signaled that possibility. Pointing out that a local Chinese manufacturer in Shanghai can produce more than one million masks per day, the article mentioned an often-cited rule: masks can be exported abroad, “provided that the domestic needs are secured.”