Tesla could soon open another factory in the United States 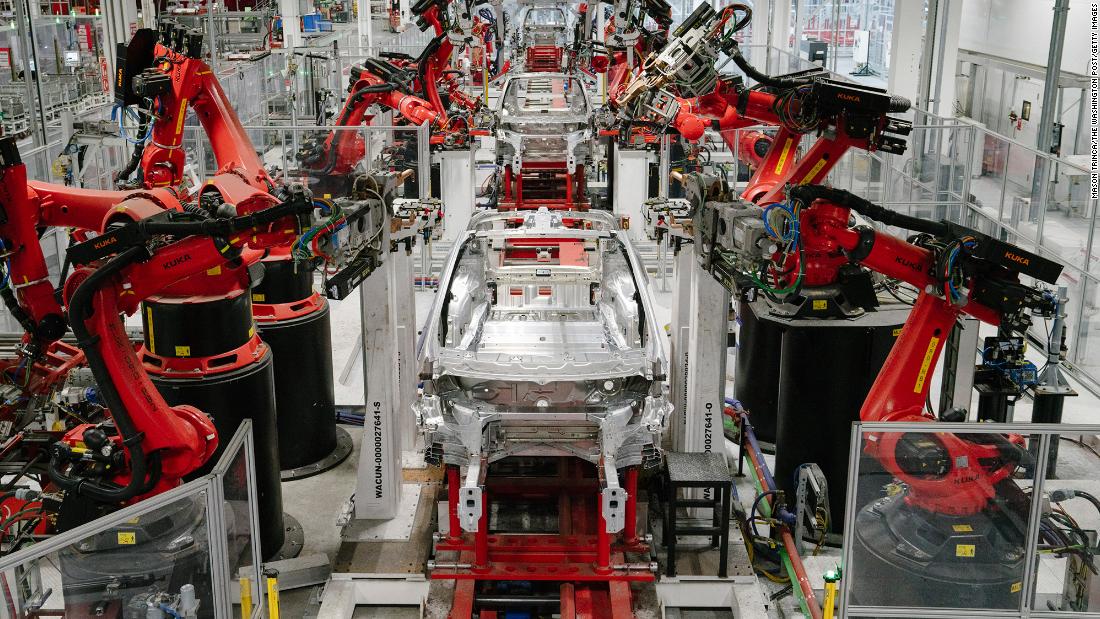 The Travis County, Texas, government which includes the city of Austin, is meeting behind closed doors Tuesday to discuss an incentive package for a factory for the electric automaker, according to the United Auto Workers union.

A spokesman for the county government would not discuss the agenda for the executive session portion of the weekly meeting, although he said any package of tax breaks and other inducements will need a public hearing before it is approved. Tesla (TSLA) did not respond to questions about negotiations.
But in April, CEO Elon Musk said he expected to announce a new US plant by the end of July, if not sooner. And asked by investors how many assembly plants he expected to be operating within five years, he said “several more than there are today.”
Tesla will need more plants soon. Its main plant in Fremont, California, has reached and even exceeded capacity, with many of the cars being built under a permanent tent-like structure that was added as it sought to increase production of the Model 3, now its best selling car.
But as it begins to ramp up production of the Model Y, as well as the Cybertruck pickup, due to go into production in 2021, it needs more capacity. With Americans shifting away from sedans to buy SUVs, the Model Y will be a key vehicle for Tesla. Musk has said it should become the company’s bestseller, targeting sales that could make it the bestselling SUV of any kind, gas or electric, in the US market.
In March Musk said the new US plant would be somewhere in the center of the country to better serve the East Coast market.
Tesla also plans a semi-truck as well as a Roadster. And he said he plans factories in “various parts of the world.” So the next US plant probably won’t be the company’s last.

The company also needs to diversify its production away from a single US plant, as became apparent during his high-profile battle with public health officials in California who wanted to keep the Fremont plant shut during the Covid-19 outbreak there.

In the midst of his opposition to stay-at-home and shutdown orders in response to the pandemic, Musk said there are risks posed to the company because of its dependence on a single plant for all US sales.

“The [Fremont plant] produces the vast majority of our cars. It [the Alameda County stay-at-home order] will cause great harm, not just to Tesla but to many companies,” he said. “And while Tesla will weather the storm, there are many small companies that will not.”

Where the plants will be located will likely depend on what kind of tax breaks and other deals Tesla can get. And history suggests it will be a very lucrative package.

It has gotten rich deals from local governments before: The Gigafactory battery plant in Nevada got one of richest deals ever offered a company, valued at $1.25 billion. The UAW, which has unsuccessfully sought to organize the plant in Fremont, vows to fight any incentive deal for Tesla’s next US plant.

“If you look at the track record you have to wonder if this taxpayer money will result in the promised jobs,” said Mitchell Smith, the head of the UAW region that includes Texas. “It is important to slow down at a time when governments are struggling with the budget effects of Covid-19 and make sure we have strong assurances to the community that these jobs will be good paying quality jobs, that there will be safety in the plant, and that there is a guaranteed community benefit.”

But local governments were eagerly trying to land the Tesla plant even back when unemployment was still near a 50-year low. At a time when unemployment is at the highest levels since the Great Depression, local governments are going to be that much more eager to land a factory that promises thousands of good paying jobs, no matter the cost in tax breaks and other incentives.