The bull market is back for Chinese stocks 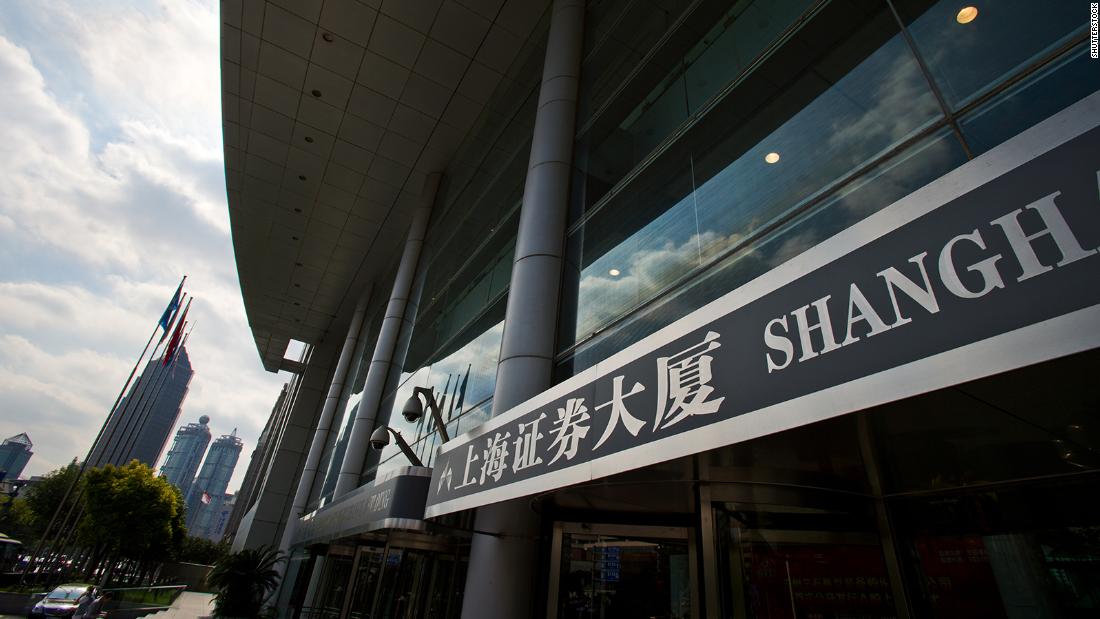 The Shanghai Composite (SHCOMP) led markets in the region and closed up 5.7%, its best single-day percentage gain since July 2015. It’s now more than 20% above recent lows from late March — the traditional benchmark for a bull market. The Hang Seng (HSI) closed up 3.8%, also entering a bull market.

The indexes are the latest major stock markets to break into bull territory. The S&P 500 has rallied nearly 40% from its low on March 23, while Germany’s DAX has skyrocketed more than 50% since March 18. The FTSE 100 in London has risen more than 25% since March 23. Japan’s Nikkei 225 and South Korea’s Kospi are also up more than 20% from March lows.

Some of the best performers in Hong Kong and Shanghai on Monday were Chinese financial stocks. Regulators in Beijing had earlier loosened rules on margin financing, the practice of investing with borrowed funds.

“The signal from the regulators is clear: They are pushing for the development of margin trading and short selling business in China,” wrote Ma Ting Ting, an analyst for Chinese securities firm Guosheng Securities, in a research note Sunday. “We expect regulators to continue to boost stock market activity and try to guide even more funding from banks and insurers into the stock market.”

Markets in mainland China are dominated by local investors. Virtually all investors in mainland stock markets — 99% of the investor base — are individuals, according to a May survey taken by the China Securities Depository and Clearing Corporation.

The rally also comes as chatter about the return of a bull market heats up in mainland China. Several state media outlets said over the weekend that investors were rushing back to stocks as part of a “bull comeback” and suggested it is exactly what China needs now, signaling further government support for markets.

On Monday, the state-owned China Securities Journal published an article asserting that “cultivating a healthy bull market is important for creating new opportunities.”

“In the post Covid-19 world, the economy needs a healthy bull market more than ever,” the newspaper wrote.

Defense stocks included in the Shanghai Composite also rose sharply, as tensions rise between the United States and China in the South China Sea. Two US Navy aircraft carriers arrived in the region for the first time in six years, a show of military might from Washington as it pushes back against China’s sweeping claim to much of the contested region.

Other major markets around the world joined the rally, despite ongoing concerns about the coronavirus pandemic. The Nikkei 225 (N225) rose 1.8%, while the Kospi (KOSPI) was 1.7% higher. The FTSE 100 (UKX) advanced 2.2%, while the DAX (DAX) and CAC 40 (CAC40) also gained over 2%.
Dow (INDU) futures increased 350 points, or 1.4%. Futures for the S&P 500 (SPX) and the Nasdaq (COMP) rose 1.1% and 1.2%, respectively.
Major coronavirus developments still gave some investors pause. Jeffrey Halley, senior market analyst for Asia Pacific at Oanda, noted that Australia’s S&P/ASX 200 was the only major index to trade lower in Asia, slumping 0.4% as the state of Victoria closed its borders and placed thousands of people under lockdown after a sharp rise in coronavirus cases.