The Business World Wakes Up to a Pandemic 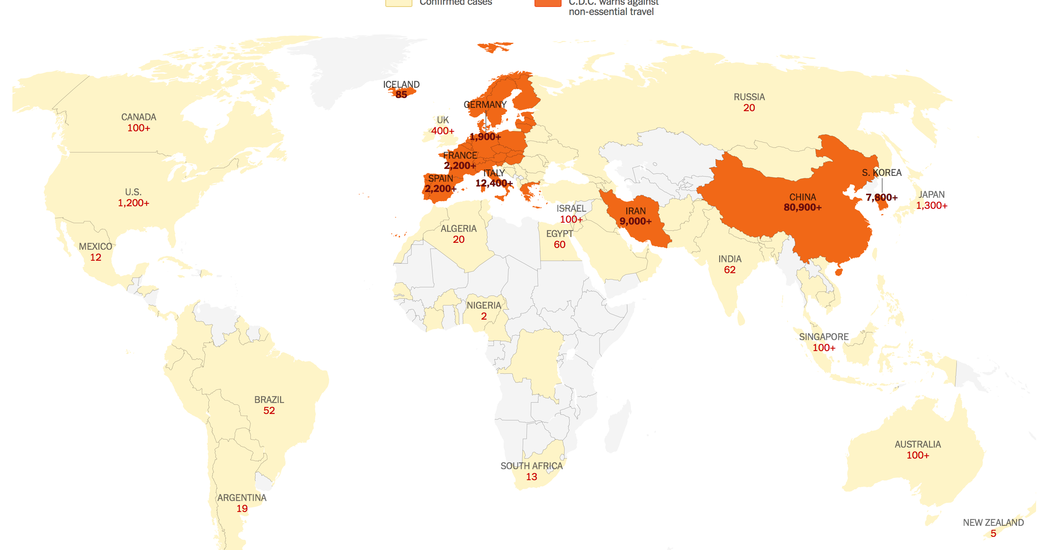 The N.B.A. has suspended its season because of the coronavirus and Tom Hanks said he and wife Rita Wilson have both tested positive. Global markets are sinking and U.S. futures point to another big drop. (Want this in your inbox each morning? Sign up here.)

‘We have rung the alarm bell loud and clear’

A cascade of announcements marked a turning point in the coronavirus crisis, with ordinary life for many disrupted for the foreseeable future. Businesses and investors are adjusting to this new reality, in which everyday social interactions are altered, travel is restricted and general economic activity is limited — in some cases severely.

• In sounding this alarm “loud and clear,” the agency noted that it hasn’t changed its assessment of the threat, nor did it want to cause “unreasonable fear.”

• It reiterated that countries should be taking “urgent and aggressive” action to contain the virus, noting that it is possible to control it, albeit while “taking a heavy toll on societies and economies.”

• Foreigners who have been in the 26 countries of Europe’s Schengen Area in the previous 14 days cannot travel to the U.S. for 30 days. The move will have profound economic consequences.

• The president also pledged aid for workers who are ill or quarantined, an expansion of low-interest loans for small businesses, and tax deferrals.

He mischaracterized some of these policies during his speech: It had to be clarified shortly afterward that the travel ban applied only to people, not goods, as he’d said. This spooked investors, according to Gregory Daco, the chief U.S. economist at Oxford Economics, in a research note this morning:

“Markets reacted negatively to what was perceived as a solemn but confused speech that placed blame on other nations, omitted to focus on immediate actions to relieve the most affected individuals, and lacked in concrete fiscal and health measures to address the economic and financial impact of the virus.”

• The N.B.A. suspension came after a player tested positive, and the N.C.A.A. said that its end-of-season tournament would take place in empty arenas. The fate of other sports leagues, and the Tokyo Olympics, remains up in the air.

• Schools across the country — and the world — have canceled classes.

• Many companies (including the New York Times) have asked employees to start working remotely.

The end of the bull market

After an all-time high just a month ago, a precipitous fall in stocks pushed the Dow into the common definition of a bear market — a 20 percent fall from a recent peak — in record time. The S&P 500 will almost certainly follow today, according to futures, ending the longest bull market in history. It ran just over 11 years.

The volatility has been dizzying, with much sharper swings up and down (mostly down) than usual. A lack of leadership from world governments, the NYT’s Mark Landler writes, is at least partly to blame.

Goldman Sachs thinks things will get worse before they get better. The bank’s chief strategist, David Kostin, forecasts a nearly 30 percent decline in the S&P 500 from its February peak. A counterpoint from Duncan Lamont of Schroders: “Every dollar, euro or pound invested today buys more shares than it would have done a few weeks ago.”

• Ignoring the advice either way, investors are loading up on gold.

The bond market also looks shaky. The huge rally in U.S. government debt during the stock-market swoon has stopped, which some take as a sign that banks are selling bonds to raise cash to offset deteriorating positions in other assets.

Leaders from many of America’s top financial institutions met with President Trump yesterday — though their mission ultimately seemed to be to reassure the president and the markets, rather than talk policy.

Executives projected confidence. Mike Corbat, the C.E.O. of Citigroup, said, “This is not a financial crisis,” according to the WSJ, while Brian Moynihan of Bank of America said that banks were in “a great position.” Several chiefs told Mr. Trump that the economy was the strongest they’d seen in years, according to CNBC’s Kayla Tausche.

Wall Street’s actions in the real world tell another story. Blackstone’s Steve Schwarzman appeared in good spirits at the White House meeting, but his firm has advised some of its portfolio companies to pre-emptively draw down their credit lines, according to Bloomberg. In fact, more and more of corporate America is hoarding cash and tapping credit lines just in case.

Credit drawdowns show how defensive boardrooms are becoming. And while the big banks should be able to tolerate the dash for cash for now, some people are worried: “No one can model this, no one knows where this will end,” Jim Bianco of Bianco Research told Bloomberg.

The other big issue that corporate boards may soon have to confront: If your C.E.O. tests positive for the coronavirus, when do you tell investors?

At the end of last year, nonfinancial companies had borrowed $13.5 trillion, double their debt a decade earlier. According to a recent report from the O.E.C.D., this debt “has lower overall rating quality, higher payback requirements, longer maturities and inferior investor protection.”

What could go wrong? Energy companies are big issuers of so-called junk bonds, and the plunge in oil prices could make it harder for them to repay these debts, as the NYT’s Peter Goodman explains. Historically low interest rates have also given a wide variety of borrowers a false sense of security — “zombie” companies that have gorged on cheap debt may face a reckoning if lenders refuse refinancings during a virus-induced downturn, writes the FT.

How bad could it get? Moody’s expects defaults on junk bonds to rise, but even its worst-case scenario envisions a smaller spike in the share of bad debt than during the 2008 financial crisis. That said, given the recent borrowing binge, even a lower rate of defaults than during the global financial crisis could mean a similar absolute number of junk-rated companies reneging on debts.

So you’re working from home now …

We are, too. Here’s how to stay productive away from the office:

• The Verge advises setting up an area that helps you focus, and make sure you have the tools you need, like reliable Wi-Fi and mobile signals. And don’t forget to stretch your legs every so often.

• Quartz offers tips on how to work from home when your partner is too, including setting up separate zones if possible and deciding who does what around the house during the day.

• The NYT has useful information for leaving the house, such as whether you can get your money back if you cancel a flight — and what experts say about whether you should travel at all.

• Take some mental health breaks, like watching this uplifting video about hygiene tips.

• Carl Icahn has raised his stake in Occidental Petroleum to nearly 10 percent, as he seeks to unseat the board. (WSJ)

• The sports apparel retailer Modell’s, one of the country’s oldest, has filed for bankruptcy and will close all its 141 stores. (NYT)

• The Trump Organization is accused of bribing New York City officials in the 1980s and 1990s to lower its property tax rates. (ProPublica)

• More of Silicon Valley is turning its back on SoftBank’s Vision Fund. (FT)

• Harvey Weinstein was sentenced to 23 years in prison. (NYT)