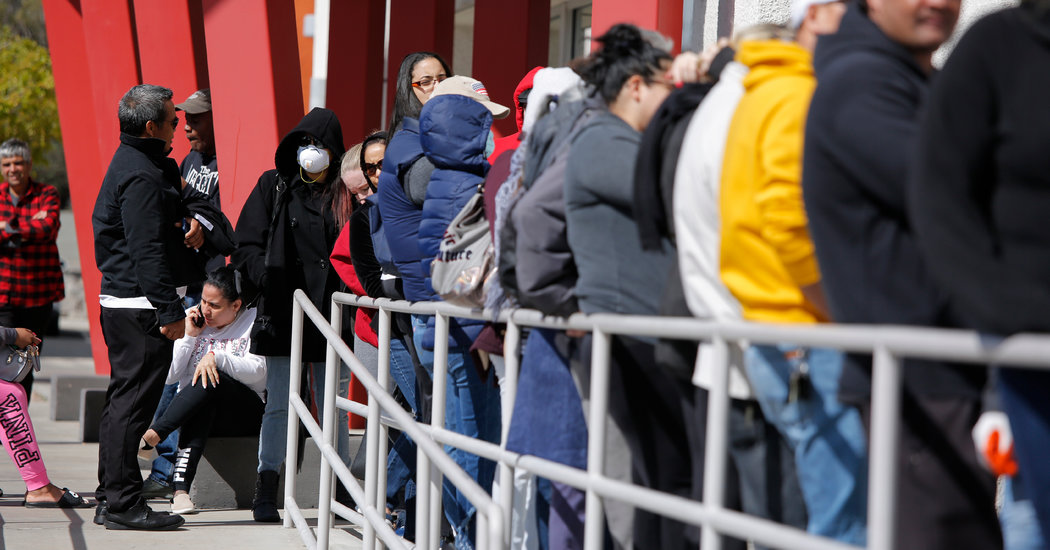 Want this email in your inbox each morning? Sign up here.

The shape of things to come

Recessions almost always follow bear markets, and there is little doubt that the steep market decline driven by the coronavirus pandemic will lead to a severe economic downturn. How bad it gets will depend on the nature of the government response.

Economists have been slashing their forecasts, and the numbers are grim, especially for the second quarter. But what real difference does it make if Goldman Sachs thinks the U.S. economy will shrink by 5 percent and Deutsche Bank expects a 13 percent fall? It’s going to be bad, and the shape of the downturn is what many are focusing on now.

Will it be a V-, U- or L-shaped recovery? Calls for a short, sharp downturn — a V-shaped decline and rebound — have been fading away, as widespread business shutdowns and “social distancing” orders suggest that it could be a while before things return to normal. That implies a more gradual U-shaped trajectory. In the worst-case scenario, the drop in activity lasts so long that it resembles an “L”: falling fast and then staying low.

The shape of bailouts is also emerging, with Senate Republicans presenting their $1 trillion proposal for business loans, tax cuts and direct payments to Democratic colleagues today. But disagreements between the parties in Congress, and between the White House and the Fed, may slow the passage of stimulus measures.

• Yesterday, President Trump suggested that the government could take equity stakes in companies as a condition of aid.

• Nikki Haley, the Trump administration’s former U.N. ambassador, resigned from the board of Boeing, which is seeking a $60 billion bailout of the aerospace industry. She said, “I cannot support a move to lean on the federal government for a stimulus or bailout.”

We’re about to see some truly terrible job numbers, as companies lay off workers when they close their doors. The number of initial unemployment claims filed last week shot up to 281,000, compared with 211,000 the week before. When the data for this week is published, the level of claims is expected to break records: Analysts at Goldman think jobless claims could reach above two million.

In other coronavirus news …

• The global food supply is buckling under the strain of frenzied buying. (Bloomberg)

• Walmart will pay out $550 million in cash bonuses to its hourly workers and hire up to 150,000 temporary employees. (WSJ)

• The rental car companies Hertz and Avis want to be part of any bailout of the travel industry. (Bloomberg)

A storm is brewing for senators who sold stocks in the early stages of the coronavirus outbreak. At the same time, data suggests that company execs have been buying during the turmoil.

Dianne Feinstein, a Democrat; and Richard Burr, James Inhofe and Kelly Loeffler, all Republicans, sold shares starting in late January, according to disclosures. The sales took place before the worst of the recent market rout.

• Mr. Burr, who is the chairman of the Senate Intelligence Committee, has received the most criticism, given his sales took place as he delivered messages of public reassurance and private alarm. The sales also appear to represent a significant share of his overall holdings.

• Ms. Feinstein and Ms. Loeffler said that their portfolios were managed by others, without their input or knowledge.

Meanwhile, company insiders appear to be buying. According to AlphaSense, a data platform, regulatory filings announcing purchases by executives and directors have jumped in recent weeks.

• At companies with market caps of at least $1 billion, there have been 1,305 filings for stock purchases so far this month, compared with just 113 during the same period last year. Executives may think the bear market has hit their shares too hard, or that purchases with their own money serve as a sign of commitment during tough times — or a bit of both.

• Noteworthy buyers in the past week include David Simon, the head of the mall operator Simon Property Group, who bought $9 million on March 17; and Charles Scharf, the C.E.O. of Wells Fargo, who bought $5 million in the bank’s shares on March 13.

Bill Gates’s notes on a pandemic

He may not be on the board of Microsoft anymore, but Mr. Gates is keeping busy through the Bill and Melinda Gates Foundation, helping respond to the coronavirus. He conducted an Ask Me Anything Q.&A. on Reddit yesterday, answering queries about the disease outbreak. Here are some highlights.

Is there any chance that the 18-month timeline for development of a vaccine can be shortened, and by how much?

This is a great question. There are over six different efforts going on to make a vaccine. Some use a new approach called RNA which is unproven. We will have to build lots of manufacturing for the different approaches, knowing that some of them will not work. We will need literally billions of vaccines to protect the world. Vaccines require testing to make sure they are safe and effective.

Is there anything you can do to assist with ventilator production?

There are a lot of efforts to do this. If we do social distancing (“shut down”) properly then the surge of cases won’t be as overwhelming. Our foundation’s expertise is in diagnostics, therapeutics and vaccines so we are not involved in the ventilator efforts, but it could make a contribution to have more, especially as the disease gets into developing countries including Africa.

How long will this go on?

Oxy may tap a former leader to take on Carl Icahn

Occidental Petroleum has a ton of problems right now: plunging oil prices, huge debt from its $38 billion takeover of Anadarko and an irate Carl Icahn making trouble among its shareholders.

The company is said to be in talks to bring back its former C.E.O., Stephen Chazen, as chairman, Cara Lombardo of the WSJ reports. It hopes that bringing back Mr. Chazen will please Mr. Icahn, who reportedly wanted Mr. Chazen to serve on an alternative slate of directors he proposed for the company.

There’s no guarantee that will help, however, as Mr. Icahn is said to have soured on Mr. Chazen, according to the WSJ. Mr. Icahn’s biggest priority now: getting Oxy to consider selling itself.

• Our colleague Amanda Hess takes a deep dive into The Wing, the women-focused co-working company, and finds employees there who don’t think the start-up is living up its utopian goals. (NYT Magazine)

• Nathaniel Popper and Ana Vanessa Herrero tell the story of a coder and a dictator, about a crypto enthusiast who built a digital coin for the Venezuelan regime, and nearly paid for it with his life. (NYT)

• Louise Lucas of the FT reviews “Samsung Rising,” a new book by Geoffrey Cain about the Korean technology behemoth. Mr. Cain’s book “throws into relief what is perhaps Samsung’s fatal flaw: an inability to learn from its mistakes, which it is thus condemned to repeat.” (FT)

• “Deaths of Despair and the Future of Capitalism,” a new book by the Princeton economists Anne Case and Angus Deaton about the straits of white working-class men in America, gets a positive review in the NYT: “It is a highly important book.” (NYT)

• Airbnb is reportedly fielding pitches from would-be investors, even amid the coronavirus crisis. (CNBC)

• A look at the Trump administration’s U-turn on stock buybacks. (Axios)

• Tesla will shut its factory in Fremont, Calif., ending its apparent defiance of a local county order. (Separately, Mayor Bill de Blasio of New York has asked Elon Musk if the company could produce ventilators for the city.) (NYT)

• Netflix and YouTube will downgrade the quality of their video streams in Europe to ease the burden on the continent’s internet infrastructure. (CNN, Reuters)

• Inside the global race to develop a coronavirus vaccine. (NYT)