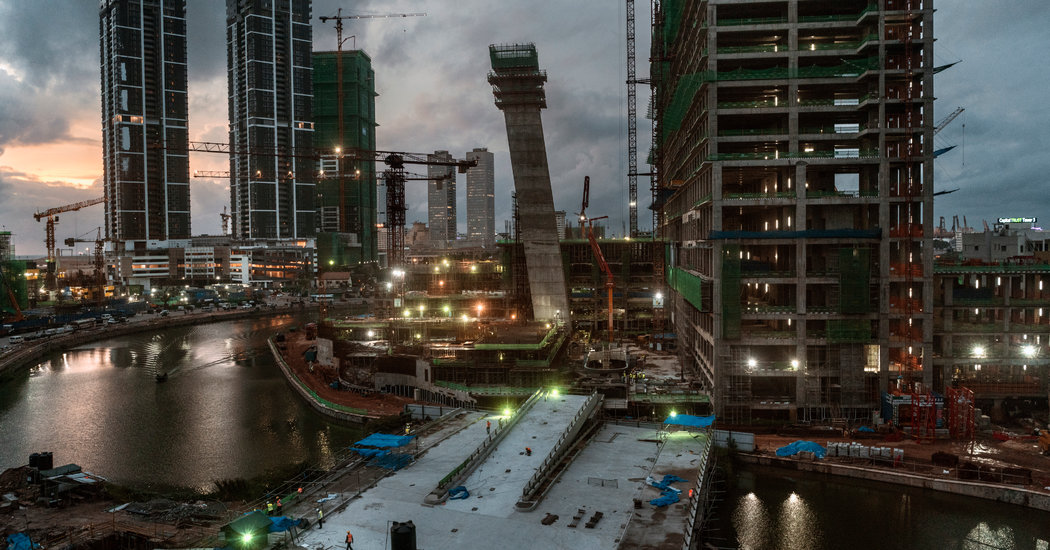 As the coronavirus spread around the globe, Pakistan’s foreign minister called his counterpart in Beijing last month with an urgent request: The country’s economy was nose-diving, and the government needed to restructure billions of dollars of Chinese loans.

Similar requests have come flooding in to Beijing from Kyrgyzstan, Sri Lanka and a number of African nations, asking to restructure, delay repayments or forgive tens of billions of dollars of loans coming due this year.

With each request, China’s drive to become the developing world’s biggest banker is backfiring. Over the last two decades it unleashed a global lending spree, showering countries with hundreds of billions of dollars, in an effort to expand its influence and become a political and economic superpower. Borrowers put up ports, mines and other crown jewels as collateral.

Now, as the world economy reels, countries are increasingly telling Beijing they can’t pay the money back.

China faces difficult choices. If it restructures or forgives these loans, that could strain its financial system and infuriate the Chinese people, who are suffering under their own slowdown. But if China demands repayment when many countries are already angry with Beijing over its handling of the pandemic, its quest for global clout could be at risk.

“China is politically on the back foot,” said Andrew Small, senior fellow at the German Marshall Fund. Should China foreclose on those loans, he added, “they would be taking over strategic assets in countries that now can’t afford to feed their people.”

China’s global reputation is on the line. Countries are openly questioning its role in the coronavirus outbreak, after Chinese officials in January initially downplayed the severity and contagiousness of the disease. Beijing is selling and donating masks and equipment to help its battered image. A misstep could deal its global ambitions a major setback.

At the same time, the financial stakes are huge. The Kiel Institute, a German research group, pegs China’s lending to the developing world at $520 billion or more, with the vast majority doled out in the last few years. That makes Beijing a bigger lender than the World Bank or the International Monetary Fund.

At the forefront of the spree is the Belt and Road Initiative, President Xi Jinping’s $1 trillion program to finance infrastructure projects across the world and pick up allies in the process. Since the initiative started in 2013, China has lent up to $350 billion to countries, about half of them considered high-risk debtors.

China has dismissed the idea of mass debt forgiveness but signaled that it is willing to negotiate. In some cases it has already acted: The Kyrgyzstan government announced in April that China agreed to reschedule $1.7 billion of debt repayments, without disclosing details.

Others are hoping for relief too. “Not only from China have we requested,” said S.R. Attygalle, Sri Lanka’s secretary to the treasury, in an interview, citing requests to Japan and China’s Export-Import Bank. In the meantime, he said, China Development Bank widened a credit line by $700 million to help Sri Lanka cope, lowered the interest rate and delayed the repayment timeline by two years.

Beyond those steps, Chinese officials haven’t yet decided how to tackle the problem, say people familiar with some of the deliberations.

Debt relief is “not simple or effective,” Song Wei, an official in the research arm of China’s Ministry of Commerce, wrote in the Global Times, a newspaper controlled by the Communist Party. “What China could do to help is bring projects funded by loans back to life and realize sustainable profits, instead of measures as simple as offering write-offs.”

Belt and Road had become a sensitive subject before the outbreak. Chinese officials worried whether too many banks and companies were pouring money into the same countries with scant coordination. China’s financial system is already straining under debt accumulated by state-run companies and local governments to keep growth humming.

Some people in China began questioning whether their hard-earned money was being squandered abroad. Despite China’s growing wealth, its households still have incomes less than a quarter of those in developed countries. Its economy has also been shaken by the outbreak, leading it to shrink for the first time since the Mao era.

The lending has drawn scrutiny outside China, too.

China’s loans differ from most other loans to developing countries by rich nations or by institutions like the World Bank. They tend to carry higher interest rates and shorter maturities, requiring refinancing every couple years. They frequently use national assets as collateral. Those features gave Chinese state-controlled banks the confidence to lend to poor countries.

The Trump administration has accused China of “debt trap diplomacy,” lending more money than poor countries could afford to seize strategic assets and to expand its military and economic footprint.

Beijing denies these accusations, and many Chinese experts agree. Seizing collateral overseas is difficult, they argue. Loans cost more because Chinese lenders face the real prospect of not getting paid back.

“A lot of the loans should have higher interest rates that should reflect the correct risk,” said Chen Long, a partner at Plenum, a Beijing economic analysis firm.

But an anti-China backlash has grown in recent years as countries struggled to pay off debts. Belt and Road projects have often proven unprofitable, leaving taxpayers with hefty bills. When Beijing seized a strategic seaport in Sri Lanka as collateral, debtor nations watched with concern.

China also relied on a secretive web of bilateral negotiations for Belt and Road, to line officials’ pockets or get them to agree to unreasonable terms, some debtor countries claim. Malaysia pushed back on a $16 billion loan package, pressuring Beijing to cut it to $11 billion.

Now it appears Beijing underestimated the risk that severe credit problems might afflict all developing countries at the same time. China still insists on dealing with its debtor countries individually. But leaders in those places are increasingly calling for broad global efforts to help with their problems.

“China wants to keep Belt and Road countries divided, as they are stronger than each country individually,” said Benn Steil, the director of international economics at the Council of Foreign Relations.

In April, Pakistan’s prime minister appealed to wealthy countries and institutions for debt relief for all developing nations. Two weeks later, the Group of 20 nations, which includes China, announced it would freeze all debt payments for the world’s poorest countries until the end of the year.

The pressure on China will only increase as the global economic crisis deepens. Officials familiar with the debt negotiations said many countries are demanding China provide debt relief or forgiveness, including a number of African countries.

Ethiopia, Africa’s fastest-growing economy, has asked China to cancel part of its debt load and is taking a lead role on behalf of African nations in negotiations, several officials said.

“These are early days. But I know the Chinese have generally been recognizing of the challenges that countries are in,” said the state minister of finance Eyob Tekalign Tolina in an interview, adding that a bloc of the “least developed” African countries have called for debt cancellation. “Given the overall global shock and the pandemic’s effect on growth, this is a call for support,” he said.

But Ghana’s finance minister, Ken Ofori-Atta, said in a video interview with the Center for Global Development that China needed to do more and “come on stronger.”

Chinese officials insist that they will continue to do projects in the developing world. Pakistan last week awarded a $5.8 billion dam-building contract to a Chinese state-owned company’s joint venture with the commercial unit of the Pakistani army. Financing details weren’t released.

But if China strikes hard bargains, debtor nations could band together and try to present a united front. They could reveal the extent of their Chinese loans and their terms and conditions, which could put even more focus on the problem. Other countries could shift how they lend, which could force China to change its ways or ease back.

“It’s a reckoning for China,” said Scott Morris, a senior fellow at the Center for Global Development, a think tank.

“When you look at the breadth and scope of the countries that may default, it could be a very high risk for China. Will they take an inevitable write-down on some of these debts? Or will they be willing to seize countries’ assets during such a sensitive time?”