The Fear of Coronavirus and Flu Colliding in the Fall 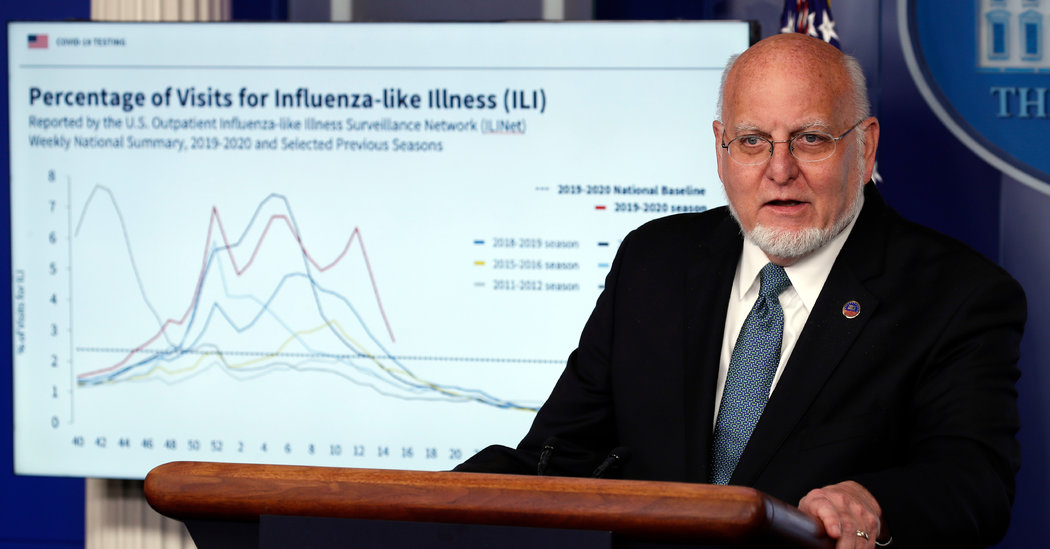 Could the United States face two epidemics at the same time next fall, flu and the coronavirus?

That frightening idea was raised by Dr. Robert Redfield, the director of the Centers for Disease Control and Prevention, during an interview on Tuesday with The Washington Post. He suggested that a new surge in coronavirus cases could coincide with the next flu season, causing an even more difficult crisis than the one the nation is facing now.

“We’re going to have the flu epidemic and the coronavirus epidemic at the same time,” he said.

At Wednesday’s White House briefing, President Trump said that Dr. Redfield had been misquoted and would clarify his remarks. But Dr. Redfield then said that The Post had quoted him correctly. But he tried to dial back the alarm his comments had provoked.

He reiterated several times that if the situation became more difficult, that did not mean it became worse.

He added: “The key to my comments and the reason I really wanted to stress them was to appeal to the American public to embrace the flu vaccine with confidence. One of the greatest tools we have as we go through the fall-winter season is to get the American public to embrace the influenza vaccine and thereby minimize the impact of flu to be the other respiratory disease we confront.”

Mr. Trump said, “We may not even have corona coming back.” He continued: “If it comes back, it won’t be coming back in the form that it was, it will be coming back in smaller doses that we can contain. What the doctor was saying, and I spoke to him at great length, he was saying if it should come back, you have the flu and the embers of corona, but in my opinion from everything I’ve seen, it can never be like anything like we witnessed right now. It’s nothing like — what we’ve just gone through, we will not go through.”

Epidemiologists and infectious disease experts interviewed before the Wednesday briefing doubted that the virus would go away, and did not rule out the prospect of a worse crisis in the fall if the two diseases strike at the same time.

“When flu season comes, there is the possibility that we will be dealing with two respiratory viruses at the same time — flu and Covid,” Dr. Thomas Frieden, the former head of the C.D.C. and the president of Resolve to Save Lives, a nonprofit focused on disease prevention, said in an email. “This could be a double challenge for our health care systems.”

Even if social distancing and other mitigation measures succeed in “flattening the curve,” once those strictures are loosened, cases could surge again, Dr. Frieden said.

“The end game with this virus is, it’s going to try to infect as many of us as possible,” Dr. Michael Osterholm, the director of the Center for Infectious Disease Research and Policy at the University of Minnesota, said in an interview. “With the transmission characteristics we’ve seen, this is a virus that’s going to require at least 60 to 70 percent of population to be immune, from being infected or by vaccination, for substantial reduction of transmission.”

Dr. Frieden’s analysis was similar: “Covid-19 is likely to continue to circulate until there is a vaccine. That means we need to be ready to reimpose distancing if cases threaten to overwhelm health and public health systems.”

Most experts agree that a vaccine is at least a year or more away, at best.

The C.D.C. did not respond to requests for more information in time for publication.

Dr. Osterholm said there was a widely held misconception that if new cases start to diminish, people can go back to work, the downswing will continue, the disease will go away and life will go back to normal.

There is no evidence that the warming temperatures of spring and summer will get rid of the disease, a scientific panel told the White House this month, noting that the virus was spreading rapidly in countries with hot weather, including Australia and Iran. Some laboratory studies have found that high temperature and humidity could lower the ability of the virus to survive, but the studies were not conclusive, according to the report, which came from the National Academies of Sciences, Engineering and Medicine, independent agencies that advise the government and the public.

“Generally, there are respiratory viruses, including flu and some common cold coronaviruses, that are seasonal,” Dr. Anthony Fauci, the director of the National Institute of Allergy and Infectious Diseases, said in an interview on Tuesday, before Dr. Redfield’s comments were published. “They do much better in winter and seem to taper off in summer. We do not know at all whether that will be a factor with this virus. There are indications it may not be the case.”

He added: “With warm weather, like in Singapore, they’re having outbreaks when it is warm. It is conceivable that on the basis of mitigation alone as we happen coincidentally to get into May, June, July, and it goes down, people may think it’s weather, but it’s the mitigation.”

Dr. Fauci described the ability of the virus to spread as “exquisite.” Both in the interview and in the briefing on Wednesday, he said that the nation would still be dealing with the coronavirus in the fall. He said he expected a resurgence then.

“It could be mini or it could be a big blast,” he said in the interview. “We better be prepared with a real clear adequate amount of tests and all the hospital things you need if you get an outbreak.”

Dr. Frieden said it was possible that the steps taken to stop transmission of the coronavirus would also limit spread of the flu, but he said it was way too early to predict what the next flu season would be like or to say for sure whether there would be overlapping epidemics.

“The only thing predictable about flu, as Dr. Anne Schuchat of C.D.C. taught me, is that it’s unpredictable,” Dr. Frieden said.