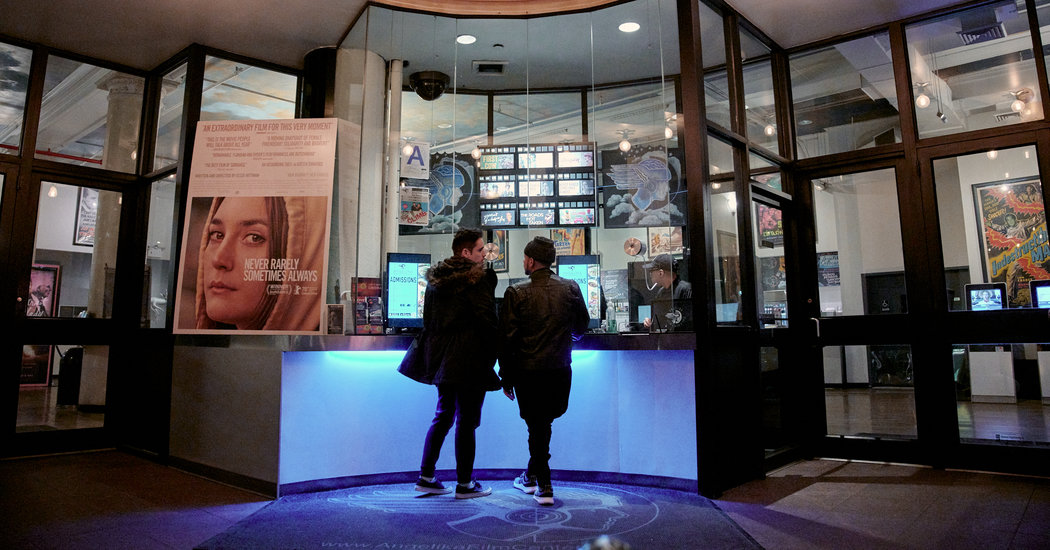 They were told not to go to their schools or offices. Concerns about long lines and shortages had discouraged them from going shopping. They could not visit libraries or museums; no concerts or shows were being held. There were no sporting events on TV, and only so many times that they could watch “Love Is Blind.”

So, during an anxious weekend when the coronavirus outbreak had forced the closure of many cultural institutions and the cancellation of countless events, some Americans did what they still could to take their minds off the widespread uncertainty: They went to the movies.

Though filmgoers did not turn out in overwhelming numbers — a Friday afternoon showing of Ben Affleck’s alcoholism recovery drama, “The Way Back,” at the AMC Magic Johnson Harlem in Manhattan was attended by only one customer — they came to sit in darkened rooms and escape into other people’s stories because it was all they could think to do.

Seated alone and well off to the side of a theater at Landmark’s Century Center Cinema in Chicago, Mike Donovan, a 66-year-old retiree and volunteer prison chaplain, explained that he had gone to a Friday matinee showing of the period drama “First Cow” practically out of habit.

“I figured there wouldn’t be many people here,” Donovan said. “I’m glad it’s open because I’ve got nothing else to do.”

Across the country, movie fans went in search of a sense of normalcy and continuity, and cinemas did what they could to provide it.

At the AMC Magic Johnson Harlem, employees wore plastic gloves to sell candy from concession stands and scrupulously wiped down touch screens on self-service soda dispensers. “Into the Unknown,” a power ballad from “Frozen 2,” played loudly through the sound system of a largely empty lobby.

Marion Johnson, accompanied by her 5-year-old daughter, Karie, said they had gone there that afternoon from the West Farms neighborhood of the Bronx to see the Pixar movie “Onward.”

Explaining that her daughter’s classes and after-school activities had been canceled, she said, “Usually on Fridays, her school has Fun Fridays. I figured we’d do our own thing — make our own Fun Friday.”

Johnson said that despite public warnings to avoid crowds and practice social distancing, she did not believe their movie outing was risky.

“I was a little skeptical about going further downtown, to tell you the truth,” she said. “But I don’t see anything wrong with it.”

Gwen Calderon, who was at a Saturday afternoon showing of “The Invisible Man” with her sister, Elizabeth Hurz, at the AMC Lincoln Square in Manhattan, explained that the anticipation of sparse attendance had been a factor in drawing them out.

“We understand what all the drama is,” Calderon said, “but we felt that if we went to the first movie of the day, it wouldn’t be that crowded. And we wanted to just change the subject for a moment.”

Still, they encountered a few tense moments, not all of which were supplied by the movie. “Somebody was coughing,” Hurz said with a chuckle, “and I said, My God, I don’t know how they could think of coming to this movie with a cough.”

At a theater in Inver Grove Heights, Minn., Denny and Peg Tetu said they planned to sit in the back row of their afternoon showing of the romantic drama “I Still Believe” and wipe down their seats with Lysol.

Though the couple, both 84-year-old retirees, said they had canceled a cruise they planned to take next month, they did not think twice about making this trip to their local cinema.

“We just watched people come in and hoped that nobody sat close to us,” said Denny Tetu, a former history teacher. About 10 other people were in the auditorium, seated widely apart.

“We weren’t even within 100 feet of anybody,” said Peg Tetu, an ex-medical technician.

On Saturday, Deadline.com reported that the weekend box office was expected to total $58.5 million, a 22-year low. But even before the coronavirus pandemic upended daily life, the movie business was already experiencing downturns this year. For the first 71 days in 2020, ticket sales at the North American box office stood at $1.74 billion, according to Paul Dergarabedian, a senior media analyst at Comscore. That figure, he said, represents a 5.6 percent decline from the same span in 2019, when $1.85 billion worth of tickets had been sold, and a steep 25 percent drop from that period in 2018, when $2.32 billion had been sold.

Although some art houses remained open, like the Angelika Film Center in Manhattan, over the weekend, several theaters announced closures as precautionary measures, including the Alamo Drafthouse locations in Brooklyn and Yonkers, N.Y.; Film at Lincoln Center; the Metrograph, Film Forum and IFC Center in Manhattan; and Nitehawk Cinema, which has two Brooklyn locations. The Hollywood Reporter said that theater chains like AMC and Regal had begun closing multiplexes in parts of Pennsylvania and New Jersey.

Even if theaters continue to keep their doors open, prospects for the weeks to come aren’t promising. Hollywood studios have begun delaying the openings of their most imminent releases. Those included potential blockbusters like “A Quiet Place Part II,” the sequel to the hit 2018 horror film; a live-action remake of the Disney animated feature “Mulan”; and “No Time to Die,” the latest entry in the long-running James Bond franchise. Production has been suspended on numerous other projects.

For now, trailers for movies that are still slated for release in the spring and summer look like tantalizing windows onto a simpler, more orderly era. They held other, unexpected resonances, too: before a Friday-night showing of the Vin Diesel action movie “Bloodshot” in South Orange, N.J., a pair of teenage girls laughed uneasily during a preview for the World War II drama “Greyhound,” which features Tom Hanks, who disclosed Wednesday that he had tested positive for coronavirus. (Hanks received the diagnosis in Australia, where he had been working on a biopic about Elvis Presley.)

But when a trailer for “Irresistible,” a political satire written and directed by Jon Stewart, showed a Republican campaign operative licking the face of a Democratic rival, the gag was met with stony silence.

Big chain theaters and art-house cinemas alike implemented their own rules about social distancing. The box office at Film Forum displayed a sign listing coronavirus-related precautions at the theater, which had restricted its seating capacity to 50 percent, in line with government recommendations. A notice in the men’s bathroom advised patrons not to use the middle of three sinks if possible. (On Saturday evening, the theater announced that it would close the following day.)

But a Friday-afternoon showing of “The Passing of the Third Floor Back,” a 1935 feature co-written by Alma Reville, the wife and frequent collaborator of Alfred Hitchcock, was attended by 23 moviegoers, who mostly clustered in the front half of the tunnellike auditorium but were otherwise reasonably spread out.

Lynne Sherman, 71, a semiretired patternmaker, said she had gone to the film because “I just like oddball black-and-white old films.”

Bruce Eder, 64, a writer, said he had ventured out because he was a fan of the film’s star, Conrad Veidt. Though the spread of coronavirus was in the forefront of everyone’s mind, he said: “I don’t feel personally jeopardized by it in any way, even though I’m in the age group that theoretically is more susceptible. I’m afraid that some of the reactions officially that are going on — it’s making me think of how we dealt with Vietnam. To save the village, we had to destroy it.”

At the evening showing of “Bloodshot” in South Orange, the spouses Richard and Yvette Martin, both 53, of Maplewood, N.J., said they went to see the film on a date night.

“I’m not going to be in fear of doing my regular activities,” Richard Martin said, noting with a laugh that his wife had a long, puffy winter jacket on with the hood up. “She grabbed the door with a piece of tissue,” he said. “I am playing it safe. I have my hand sanitizer in the car. I washed my hands for 20 seconds with warm soap and water. Everything else is business as usual.”

“We didn’t want to stay in the house tonight,” Yvette Martin said. “We wanted to get out and do something different.”