The Mystery of the Missing Bus Riders 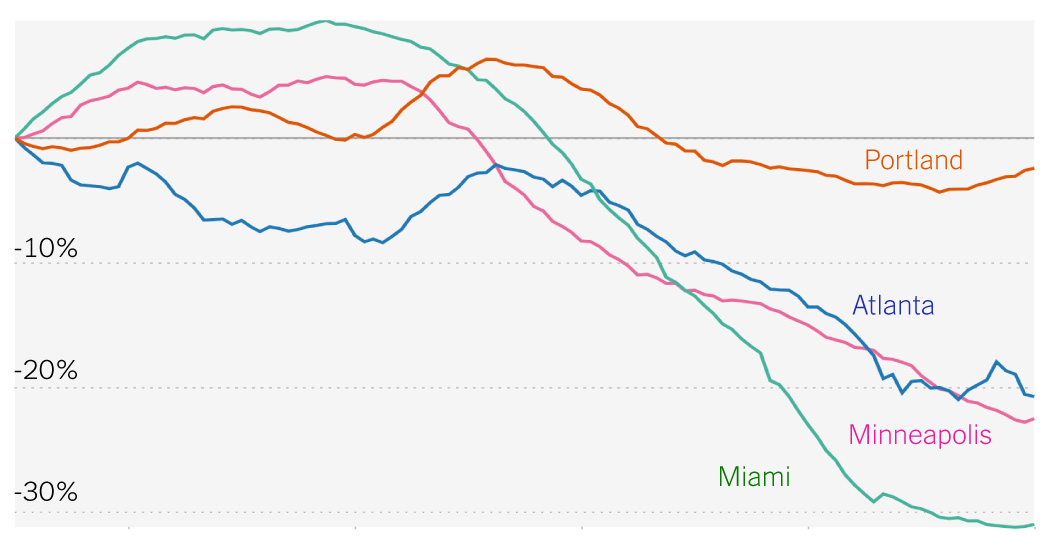 Note: Each line represents the largest transit agency in the metro region. Some regions may have multiple agencies. Source: National Transit Database

Sometime around 2013, bus ridership across much of the country began to decline. It dropped in Washington, in Chicago, in Los Angeles, in Miami. It dropped in large cities and smaller ones. It dropped in places that cut service, and in some that invested in it. It dropped in Sun Belt cities where transit has always struggled to compete with the car, and it dropped in older Eastern cities with a long history of transit use.

By late 2019, through nearly seven straight years of decline, national bus ridership in America was at its lowest level since the mid-1970s, a trend that has left service already weakened as transit agencies brace for a public health crisis.

The bus started to lose ground many decades ago as Americans bought cars, suburbanized and spread out. But the timing of this recent free fall has been more perplexing. The economy was strong in this period, meaning more people had jobs to commute to. And many of these metro areas have been growing in population — that means more commuters, too.

What has been happening then, across all of these places, at the same time?

The answer probably lies deep in a number of trends: the rise of on-demand technology, the changing nature of work, the evolution of e-commerce, the redevelopment of city centers, the influx of young professionals, and the suburbanization of the poor. Many seismic shifts in urban life are reflected in this one datapoint — the broad decline of bus ridership.

“There’s a lot of societal change that’s not necessarily connected,” said Eric Lind, the research and analytics manager with Metro Transit, which serves Minneapolis and St. Paul. “But it all points in the same way to fewer rides.”

That’s worrisome both for the remaining riders and for cities that will need strong mass transit to meet their climate goals.

In Minneapolis, bus ridership began declining in 2014 and has fallen by 26 percent. Some bus trips appear to have shifted to a newly opened light rail line. But Uber and Lyft have expanded in the city over this same time. Bike commuting has increased. The transit agency has also detected an uptick in car ownership in neighborhoods historically well served by buses. And in a strong economy, Metro Transit struggled to replace a generation of retiring bus operators, hampering service. Workers have simply had more options, as agencies around the country have found.

Mr. Lind suspects another demographic shift at play: Older people are traditionally a reliable pool of bus riders. But baby boomers aging into retirement now are the first generation to have spent their entire lives in a world dominated by cars. Unlike their parents, Mr. Lind suggested, baby boomers were never transit riders. They don’t remember riding the streetcar. They don’t have muscle memory of what it’s like to take the bus.

Researchers at Georgia Tech who have been studying the decline of bus ridership have found another demographic clue. Kari Watkins, a professor of civil engineering, and Simon Berrebi, a post-doctoral fellow, compared bus-stop data going back to 2012 in Minneapolis, Atlanta, Miami and Portland, Ore., four notably different areas where transit agencies automatically count passengers as they board the bus.

In Miami and Atlanta, neighborhoods with more college-educated residents had steeper declines in bus ridership. And one demographic pattern appeared across all four cities: Whiter neighborhoods have been losing the most ridership.

“That made us think, ‘What are the changes in the behaviors of people who are white?’” Mr. Berrebi said.

He and Ms. Watkins believe they may be taking greater advantage of new alternatives to the bus, like Uber and Lyft or bike-sharing. Other research shows that bike-sharing has eaten into bus ridership (while surveys in some cities report that bike-sharing riders skew highly educated and white).

Studies have been less conclusive on the effect of ride-hailing companies, in part because their user data hasn’t been accessible to researchers. But preliminary findings from a continuing project through the Transportation Research Board show that the largest declines in transit ridership at the metro level can be attributed to the introduction of ride-hailing services. And in the largest cities, ride-hailing has affected buses more than rail.

Mr. Berrebi and Ms. Watkins also suggest that white and more educated residents may have more access to flexible or remote work in an environment where the nature of work is shifting for everyone.

“We don’t go to work in the same way that we traditionally have,” Ms. Watkins said. “We’re doing it at more odd hours. More people are teleworking now. All of this is morphing in ways such that ‘I’m going to buy a monthly transit pass’ is kind of disappearing.”

The Georgia Tech research raises a provocative question: If whiter neighborhoods are losing the most bus trips, what will happen in neighborhoods that grow whiter over time? Gentrification typically doesn’t move fast enough to be detected in the data that Ms. Watkins and Mr. Berrebi studied (although they did see some evidence of ridership declines, particularly in Miami neighborhoods that have grown whiter).

But in some cities it is hard to imagine that shifting demographics won’t affect bus use, particularly as higher-income residents — the very riders who have the most options — move into dense neighborhoods well covered by transit, and as poorer residents who rely on transit the most move farther out.

In Atlanta, demographic patterns are changing faster than the ability of public transit to keep up, said Jacob Tzegaegbe, the lead transportation adviser in the mayor’s office.

“One of my personal fears is the suburbanization of poverty,” he said. “It’s hard to serve places that don’t have density. And it’s really hard to do it in a way that’s cost-effective.”

A bus in Lawrence, Mass. Ridership has declined by 38 percent there since 2010.Greta Rybus for The New York Times

For several decades, Atlanta neglected its bus system as it invested in rail instead, said Jeffrey Parker, the C.E.O. of the Metropolitan Atlanta Rapid Transit Authority. Then competition suddenly appeared from ride-hailing, electric bikes and scooters. The redevelopment of close-in neighborhoods also means more people can walk to work. That’s a good thing. But it can further erode bus ridership.

Add in the growth of e-commerce, and now streets are further congested with delivery trucks, slowing buses even more. And quick trips to the store that bus riders once took are no longer being made.

And much of this is outside of his agency’s control: the development patterns, the demographic change, the rise of Amazon and Uber.

“What do they control? They control providing service every day, and operating that service,” said Paul P. Skoutelas, the C.E.O. of the American Public Transportation Association. “They don’t control the streets. They don’t make the regulations and the rules about who gets what street space and where people are dropped off and picked up.”

Agencies don’t control all the infrastructure and subsidies that help transit’s biggest competitor, the car. Past research has suggested that transit riders are even more sensitive to changes in gas prices than they are to changes in transit fares. Recently gas has been cheap, and interest rates on auto loans low. In many cities, the price of urban real estate has risen, but not the price of street parking.

Michael Manville, a professor of urban planning at U.C.L.A., suspects that transit ridership has even been affected by a California law granting driver’s licenses to undocumented immigrants. (As immigration falls in general, he adds, that could shrink another reliable pool of bus riders.) He argues that the rise of Craigslist has fundamentally altered the market for used cars, too, making them easier to find and cheaper to buy.

Even riders who once seemed to have few options to the bus increasingly do.

“If you build it in a way where only those without a choice would ride it — and as soon as they have any choice they jump — that’s not really a transportation system you’re building,” said Beth Osborne, the director of the advocacy group Transportation for America.

The answer, Mr. Manville said, would be to make the true costs of driving more apparent — picture congestion pricing, higher parking rates, higher gas taxes — while giving some of the car’s structural advantages to buses instead.

“At the end of the day, we may never know what is driving this decline,” Mr. Manville said. “But I guarantee you that if you took a lane of Vermont Avenue in Los Angeles and gave it only to the bus, ridership would go up.”

In Washington, where nearly all of these forces are apparent, the City Council is considering giving residents $100 a month to use on transit. The proposal, from a city councilman, Charles Allen, would be paired with a fund dedicated to improving bus service, particularly in poorer neighborhoods. The transit subsidy, however, wouldn’t be means-tested, available only to poorer residents. It would go to everyone, ignoring the distinction between riders who have many other options and those who have few.

He’s also trying to build a broader constituency for bus service, because that is probably what it would take to accomplish things like taking lanes of traffic from cars and dedicating them to buses instead. The few cities that have bucked the declining ridership trends, like Seattle, have managed to do that. In the cities that haven’t yet, bus riders are at risk of becoming a smaller and smaller group, moving even slower.