The Story of Thalidomide in the U.S., Told Through Documents 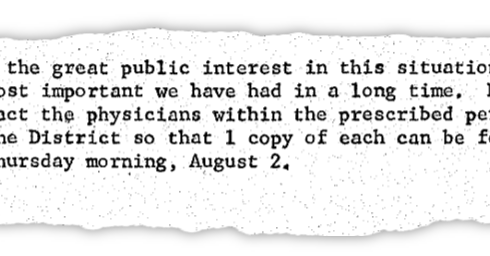 In July 1962, the Food and Drug Administration sent an urgent message to its field offices with an assignment it said was “one of the most important we have had in a long time.”

Overseas, thousands of babies in Germany, England and other countries were being born with severe defects tied to their mothers’ use of thalidomide, a drug widely taken for insomnia, morning sickness and other ailments.

Meanwhile, the federal government sought to figure out what had happened in the United States, and how many babies had been affected.

The drug was never approved in the United States, but as many as 20,000 Americans were given thalidomide in the 1950s and 1960s as part of two clinical trials operated by the American drug makers Richardson-Merrell and Smith, Kline & French.

Here is the story of the F.D.A.’s investigation, told through a sampling of the more than 1,300 pages of documents obtained through a Freedom of Information request.

On Aug. 1, 1962, President John F. Kennedy issued a warning: “Every woman in this country, I think, must be aware that it’s most important that they check their medicine cabinet and that they do not take this drug.”

Just days earlier, the F.D.A. had instructed its inspectors to interview every doctor who had received thalidomide and to investigate if any babies were harmed.

As inspectors got to work, they learned how difficult their task would be. Many doctors were on vacation, and — in an era before cellphones or email — unreachable for weeks. Others denied they had given out thalidomide, or refused to talk.

Richardson-Merrell, the Cincinnati company seeking to bring thalidomide to the United States, had learned in November 1961 that Chemie Grünenthal, the drug’s German manufacturer, was pulling its product off the market in Germany because of reports it was linked to babies being born with no arms or legs.

But in this letter to American doctors who participated in its clinical trials, Richardson-Merrell said there was still no “positive proof” of a link to thalidomide, though the drug had already been pulled from pharmacy shelves around the world.

Richardson-Merrell did not withdraw its application to sell thalidomide in the United States until a month later, in March 1962.

But that September — while the F.D.A. investigation was well underway — the company was still defending thalidomide’s reputation to American physicians. A company executive wrote in a letter, “As emotional reaction to early press reports begins to subside, thoughtful re-analysis is now occurring around the world.”

A pill treated as casually as aspirin

Federal inspectors uncovered evidence that thalidomide, which was to be sold under the brand name Kevadon, was passed among doctors and family members with seemingly little awareness that it was considered experimental in the United States. In this F.D.A. memo from August 1962, inspectors reported on two cases from North Carolina.

Although the names are redacted, the text is revealing: In one case, a doctor had been using thalidomide himself and prescribing it to his wife. In addition to the wife’s loss of vision, the doctor mentioned peripheral neuritis, nerve pain that is a side effect of thalidomide.

The other report is even more alarming — a nurse had given birth to a baby without arms or legs and, as a registered nurse, “she may have had access to the item.”

The case against Richardson-Merrell intensifies

By September 1962, investigators were beginning to conclude that, even by the laxer standards of the day, Richardson-Merrell had illegally promoted thalidomide before it had been approved. That month, Dr. Ralph W. Weilerstein, an associate medical director at the F.D.A., reported on his impressions after visiting a division of Richardson-Merrell. (The F.D.A. also investigated Smith, Kline & French, which conducted a smaller trial, but concluded that the company had acted legally.)

Richardson-Merrell employed many of the same tactics that modern-day drug companies have used to promote their products, the memos show, including hiring influential doctors to vouch for thalidomide, as well as helping the researchers to write scientific articles, “almost to the extent of ghost writing for them,” Dr. Weilerstein wrote in an internal memo.

In his memo, he referred to the doctors who participated in the clinical trial as investigators.

In October 1962, F.D.A. officials escalated their investigation into Richardson-Merrell, urging the field offices to collect affidavits from doctors who had participated in the trial, to scour local vital records offices for reports of abnormal births, and to seek out former “detail men” — salesmen — for Richardson-Merrell who might talk. “This is a priority assignment that must be handled with dispatch,” the memo read.

The F.D.A. began to jettison cases that did not help it build a case against Richardson-Merrell, even when there was evidence that thalidomide had harmed a child. In some instances, the investigators dropped inquiries when the mother’s doctor was not on the company’s list of participating physicians, for example.

In the report above, the F.D.A. concluded that the child had been harmed by thalidomide prescribed by a doctor who had participated in Richardson-Merrell’s clinical trial. But because the drug had been prescribed to the woman’s father — who gave it to his daughter — the agency dropped the case.

Today, many Americans who believe their defects were caused by thalidomide have no definitive proof.

F.D.A. investigators referred their findings in July 1963 to the Department of Justice for criminal prosecution. Agency lawyers listed 24 counts under which Richardson-Merrell violated the law, including that the company had marketed an unapproved drug and claimed that it was safe.

But in September 1964, the Department of Justice concluded that “criminal prosecution is neither warranted nor desirable.”

The letter contained a major error. It said that “only one malformed baby has been born in the United States as a result of its mother’s use of Kevadon.”

The records show someone wrote in the margin: “Not correct.”

But by then, it was too late. Richardson-Merrell would not face prosecution.