The Workers Who Face the Greatest Coronavirus Risk 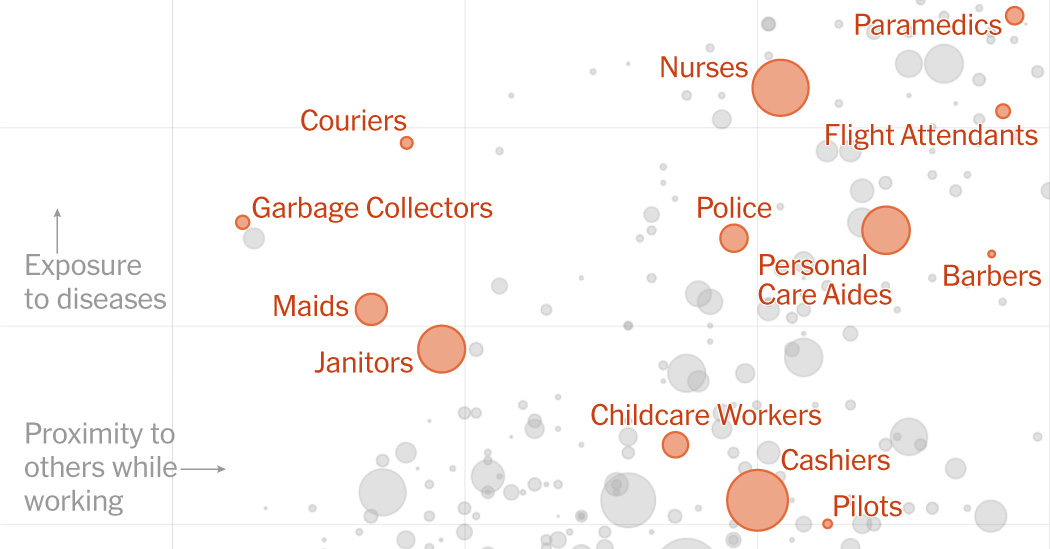 The risk levels of various jobs were calculated using O*NET, a database maintained by the Department of Labor that describes various physical aspects of different occupations. The database assigns dozens of scores to each occupation for things like how often a telephone is used to how often a job requires you to bend your body. (Housekeepers rank highest in this metric.)

As virus cases have grown, many businesses have begun closing offices and stores, and sending workers home to help slow the spread. While many companies have emergency leave policies in place to help protect their employees, there are large portions of the population that have few protections. On Saturday, legislators passed a relief package that includes paid sick leave for workers affected by the coronavirus. But, the benefits only apply to employees of companies with fewer than 500 employees, leaving millions of workers uncovered.

Percent of workers with access to paid leave benefits

For some workers — especially those in low-paying jobs — being furloughed could mean layoffs. In the Seattle area, one small catering company was forced to let go nearly all its employees because of cancellations from big tech clients.

A growing number of companies have also been asking employees to do their jobs from home. But that arrangement is largely available only to white-collar workers. For many occupations, working from home is simply not feasible, including those who are on the front lines of the response and those who are on the lower end of the economic scale.