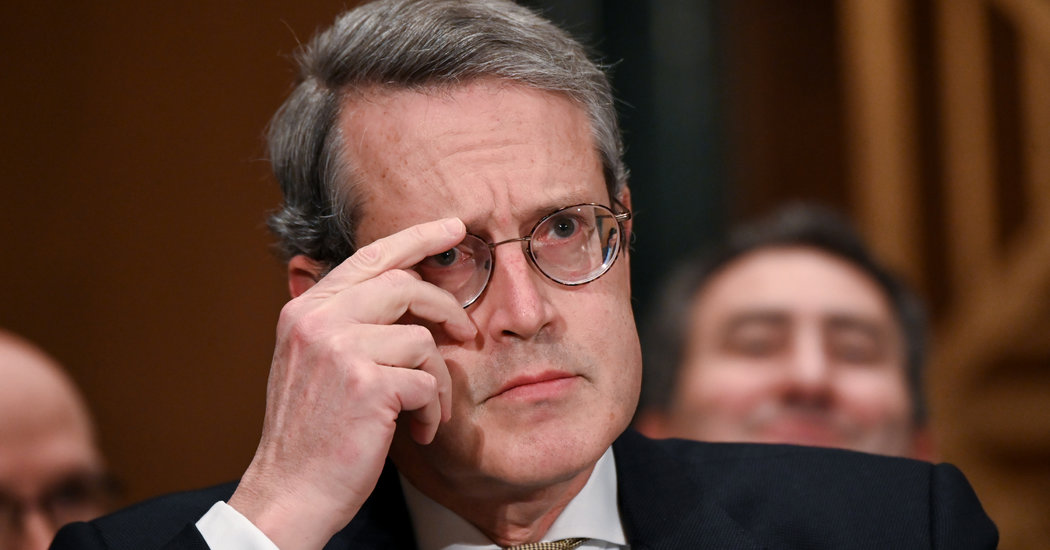 WASHINGTON — Federal Reserve officials on Friday warned that the outlook for the U.S. economy remains wildly uncertain, and the central bank’s vice chair for supervision explained how those economic risks will be reflected when the Fed releases results next week from its annual test gauging the health of big banks.

“We don’t know about the pace of reopening, how consumers will behave, or the prospects for a new round of containment,” Randal K. Quarles, the Fed’s vice chair, said in prepared remarks. “There’s probably never been more uncertainty about the economic outlook.”

Given the wide range of risks, the so-called stress tests will include three different scenarios, checking to see how the banking system would fare in the case of a V-shaped recovery, in which output and employment bounce back quickly, a U-shaped rebound in which jobs and growth take a long time to recover, or a W-shaped trajectory in which a second wave of the coronavirus forces activity to shut down again, Mr. Quarles said.

Those scenarios will not result in higher capital requirements for the supervised banks, Mr. Quarles said, because the Fed will rely on its fully-formed stress test scenarios, created before the pandemic, in February 2020, to set requirements. Nor will the central bank provide firm-specific results on how institutions fared under the three paths.

“Although our policies on stress testing emphasize the value of not increasing capital requirements under stress and thus exacerbating a downturn, our first priority must be — and is — to understand the implications of quite plausible downside scenarios from our current position for bank capital,” said Mr. Quarles.

The Fed will “provide results aggregated across banks that will compare how the banking system as a whole would fare under the three distinct views of the future,” he said.

He noted that the February 2020 scenario is similar in “overall severity” to the most optimistic, V-shaped sensitivity analysis.

Mr. Quarles said the virus scenario results could “inform our overall stance on capital distributions and in ongoing bank supervision.”

While some current and former Fed officials have urged the central bank to halt dividend payouts by banks so that they retain more of their financial cushion, officials have so far declined to do so. Big banks have voluntarily stopped stock buybacks for the time being.

The scenario analysis “will help the Board assess whether additional measures are advisable for certain banks or certain future developments,” Mr. Quarles said.

His comments came shortly after Eric Rosengren, president of the Federal Reserve Bank of Boston and an influential economist within the central bank system, warned that states may be re-opening too quickly and imperiling the economic recovery in the process.

In the United States, “efforts to contain the virus have not been particularly successful,” Mr. Rosengren said in remarks prepared for delivery Friday. Because of the continued spread of the disease “and the acceleration of new cases in many states, I expect the economic rebound in the second half of the year to be less than was hoped for at the outset of the pandemic.”

He pointed out that cases in South Carolina and Florida are rising, and offered a glum outlook for unemployment, which he said is likely to remain “in double digits” through the end of 2020. It stood at 13.3 percent in May, higher than at any point in the Great Recession.

While the employment report in May came in better-than-expected, Mr. Rosengren said that might have stemmed from states reopening earlier than epidemiologists had recommended.

Better performance in opening states now “may translate to more depressed economic activity and increased public health issues in those states in the future,” he warned.