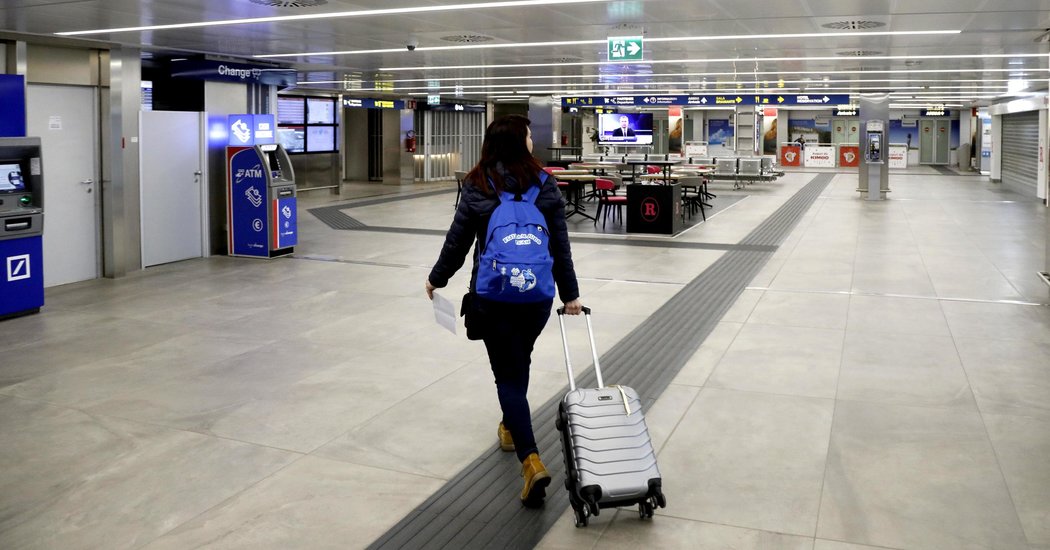 When Pam Mundus and a friend landed in Milan for a weeklong vacation on Feb. 23, uniformed airport workers in face masks, attempting to contain the spread of the new coronavirus, took their temperatures.

But when Ms. Mundus returned home on a direct flight from Rome to New York’s John F. Kennedy Airport on March 1, no one questioned her about her time in Italy or whether she might have been exposed to the illness. At that stage, the State Department had already urged Americans to reconsider travel to Italy; there were at least 1,500 cases there and 34 deaths related to the coronavirus by then.

“The only question we were asked was, ‘Have you been to China?’” Ms. Mundus, 62, said in a phone interview from her home on eastern Long Island, where she has been in self-quarantine since her return.

President Trump has claimed credit for slowing the spread of Covid-19 in the United States by imposing a ban in late January on some travelers who had recently been to China. His administration has since barred entry to travelers who have been in Iran, nearly 30 European countries and the United Kingdom.

But several experts say the experience of Ms. Mundus shows the limited effectiveness of the administration’s travel restrictions, which followed outbreaks in affected countries by days or weeks. The administration never even imposed restrictions on passengers who had been to South Korea, which also faced a large outbreak.

And the restrictions applied only to foreign citizens, despite the fact that the virus could be transmitted just as easily by the many Americans returning home in droves, who were getting confusing and inconsistent messages on how to protect themselves and their communities — or in many cases, no advice at all.

“The policy makes no sense,” said Danielle Ompad, an epidemiologist at the N.Y.U. School of Public Health. “It was based on nationality, not risk of infectiousness, and the two are not synonymous.”

Josh Michaud, an associate director for global health policy at the Kaiser Family Foundation, went further last week. When Mr. Trump barred Europeans from entering the United States, he tweeted that the move “makes about as much sense as a homeowner installing a fire alarm in the living room while the kitchen is going up in flames.”

Between Feb. 2 and March 4, the federal Customs and Border Protection agency identified 63,743 incoming passengers for closer medical screening who had recently spent time in China, Iran or the countries in Europe’s Schengen region, a C.B.P. spokeswoman said in an email. Of those, 242 were sent to Centers for Disease Control and Prevention airport stations for quarantine staff assessment, and 28 were then referred to the hospital, according to a C.D.C. spokesman.

On Tuesday, the president said airport personnel had done a “really incredible” and “fantastic” job of screening returning passengers. Crowds at several airports occurred because “everybody was screened and screened very carefully,” he said. “They didn’t want to rush it.”

But some passengers from Europe described the screening procedures as erratic at best.

Ari Minelli, a New York City architect who cut short a trip to Spain, landed at Newark Liberty International Airport on Friday evening, but was not provided any guidance on self-monitoring or self-quarantine. Spain by then had more than 4,000 cases and had just declared a state of emergency.

Mr. Minelli, who flew home from Barcelona through London, was asked before he boarded the flight in England only if he had been to China or to Iran. But the epicenter of the outbreak had already shifted to Europe.

During the flight, Mr. Minelli filled out a customs form saying he had been to Spain. But he was not given any health forms to fill out nor any instructions on quarantine.

“It seems they were operating under a previous set of regulations,” said Mr. Minelli, who, like Ms. Mundus, decided of his own accord to self-quarantine for 14 days.

In recent days, some passengers said they were given forms to fill out on the plane that asked about their travel history and symptoms, and whether they had contact with anyone who was sick. The form also included a box for “measured temperature.”

But Jolien Louis, 20, a George Washington University student from Queens, N.Y., who flew home from London on Monday, said that when she tried to hand the health forms to the person at Kennedy Airport inspecting her passport, he was not interested. She told him she had just been to Barcelona, but he told her to “keep the paperwork.”

What screening did occur may also have created conditions conducive to spreading an infection that should be avoided during a pandemic, experts said.

As hordes of American travelers rushed home from Europe in a panic in recent days — after Mr. Trump announced sweeping restrictions on travel from Europe last week, without making clear that United States citizens and residents would be allowed to come home — travelers were packed together in close quarters in airports, sometimes for hours.

“That probably caused more transmissions than it prevented,” said Ira M. Longini, co-director of the Center for Statistics and Quantitative Infectious Diseases at the University of Florida.

Asked about procedures for screening returning passengers, a spokesman for the C.D.C. said passengers returning from Italy and South Korea were processed in a different way than passengers from China and Iran.

Those who had been in Italy and South Korea were supposed to be screened for symptoms before departure. But the exact screening was left up to those countries, the spokesman said.

Airline crews were supposed to distribute cards with written information to these passengers. Those on connecting or indirect flights were to get the information from Customs and Border Protection.

Passengers who had recently been in China or Iran were to complete questionnaires about their travel history and any symptoms, and to have their temperatures taken. Those without symptoms were to be given instructions on what to do if they felt ill, and those with symptoms were to be evaluated by a C.D.C. health officer and transferred to a hospital for further assessment and isolation if necessary.

But the C.D.C. spokesman said that anyone returning from affected areas — China, Iran, South Korea, Europe’s Schengen area and Britain — should have received a card with information telling them to stay home for 14 days, not go back to work or school, avoid crowds and mass transit, and maintain distance from other people while monitoring their temperature. No one interviewed for this story received the card.

Debbie Hasbrouck, 67, lives in McCormick, S.C., and spent three weeks in Verona, Italy, in February and March visiting a son who plays professional basketball there. But when she arrived in Atlanta on March 5, having changed planes in Paris, all the customs officer wanted to know was whether she had been to China.

She has stayed home since her return, but recently developed symptoms consistent with the coronavirus and sought care at a local emergency room. Doctors did a comprehensive work-up, but were unable to test her for the coronavirus because diagnostic kits are in short supply.

Casey DeSimone, a junior at SUNY-Albany who lives in New Paltz, N.Y., and planned to spend the spring semester studying in Milan, returned to Kennedy Airport on a direct flight from Milan on March 3.

Her temperature was taken as part of security screening before she boarded the flight in Milan, she said. But she was given no information or guidance, either on the flight or afterward.

The customs officer who checked her passport at Kennedy only asked if she had been to China or Iran in the past two weeks. She and her mother, who had picked her up from the airport, stayed home for 14 days.

The C.D.C. says any traveler who has come back from a region where there is widespread community transmission of the coronavirus should stay home for 14 days and quarantine themselves.

They should take their temperature with a thermometer two times a day, and watch for fever, cough or trouble breathing. “Stay home and avoid contact with others,” a C.D.C. spokesman said, when asked for instructions for returning travelers. “If you do get sick, call ahead to your doctor before you go to a doctor’s office or emergency room.”

With community transmission now occurring in places throughout the United States, travel bans are not likely to have any effect on curbing the epidemic at this point, experts say.

“It is possible to contain an epidemic at the source, but you have to act really quickly and have airtight containment and mitigation right from the beginning,” said Dr. Longini.

Generally, however, “travel bans are usually put in place when it’s far too late for them to be effective.”