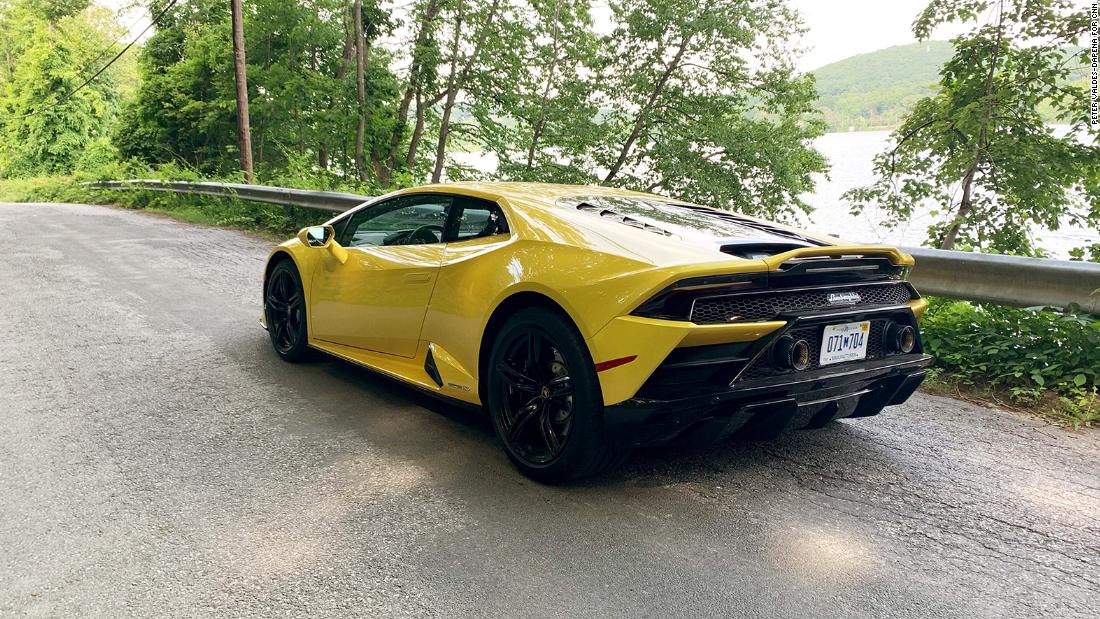 The base price for the Huracán Evo starts at about $208,000, which is still outlandishly expensive by ordinary standards. Still, it’s much less than the next cheapest Huracán, which starts at about $260,000, or the V12-powered Avantador which can’t be had for any less than about $420,000. Only the Lamborghini Urus SUV can be bought for around the Huracan Evo RWD’s starting price.

Of course, the starting price on a Lamborghini leaves a long way to go. Option costs can add up with startling speed.

For example, the Huracan Evo RWD I test drove cost $285,000. That included an optional $14,000 pearlescent yellow paint job. Photographs don’t quite capture the lustrous impact of the color but, trust me, if there was ever yellow paint worth $14,000, this is it. Still, you could get your Huracán in red, white, or some shade of yellow that doesn’t look like delicious melted butter on top of Pirelli tires. That’s up to you.

Sports seats added another $7,500 and a system that raised the nose of the car to clear speed bumps and curb cuts another $7,100.

The Huracán is a Lamborghini so, of course, it’s neck-snappingly fast with a transmission that flicks off gear shifts quickly but smoothly. The steering is sharp and quick, especially in Sport and Corsa — Italian for “Track” — modes. It’s also appropriately loud and obnoxious. Drive fast, then slam the brakes to slow down and the Huracán downshifts through its seven gears, the engine roaring and popping with each step down. One thing a Lamborghini will rarely ever be is unnoticed.

The brakes are appropriately strong, but not too grabby for normal use. Since the engine’s power is going only to the back wheels — and not all four — there is just slightly less of it. In the Huracán Evo RWD, the 10-cylinder engine produces just 601 horsepower instead of the 631 you can get in the all-wheel-drive car. But it’s plenty.

A sense of drama pervades the Huracán’s interior, as well. As in all Lamborghinis, the start button is under a small red cover that must be raised before the button can be pressed, like the button to fire a missile in an old movie. Yes, it’s a pointless bit of extra effort, but it adds to a sense of moment that climaxes with the V10’s satisfying roar.

The digital speedometer — the whole gauge cluster is actually a computer screen — always displays three digits. There’s no better way to make 92 miles an hour feel slow than to render it as 092 mph. (Even in reverse, when the gauge screen changes to show a rear camera view, the speedometer still shows three digits as if you might rocket backwards at 112 mph.)

The engine’s power goes to just the rear wheels, leaving the front wheels to just roll along and point the car. That makes a noticeable difference in how the car feels to drive. The steering is more sensitive. The finer points of the road’s surface can be felt through the steering wheel. It gives this car more of a pure, old-school pure sports car spirit that I welcomed.

Putting power through the back wheels alone can also allow skilled drivers, through clever use of the gas pedal and steering wheel together, to deliberately slide the back end of the car around through curves. It’s a fun trick and, in track driving, sometimes useful. But it also points to a potential hazard of rear-wheel, rather than all-wheel, drive, when dealing with this kind of power. The back wheels can sometimes slide when you don’t really want them to, or more than you want them to, which can result in the car leaving the road entirely and possibly hitting things.

Computerized traction control and stability control systems have been engineered to reduce the chances of things getting out of hand while you’re driving. According to Lamborghini, the systems work with extraordinary smoothness, allowing the driver to more safely play with the car without abrupt interventions.

I didn’t personally test the limits of these systems too much because I didn’t have access to a track and there were trees and sizable bodies of water around. For now, I will have to take Lamborghini at its word that these things function as advertised.

Even without any of that, the Huracán Evo RWD is a blast and at a relatively lower cost. What’s more, its performance is more enjoyable on ordinary roads so you don’t have to wait for a track driving session to really have fun with it. But it’s still far from cheap and, as ever, a Lamborghini is not to everyone’s taste. It presents itself with the subtlety of a 1980s hair metal band, but with 21st century technology. And, when it comes to Lamborghinis, that is at it should be.