‘This Is Going to Kill Small-Town America’ 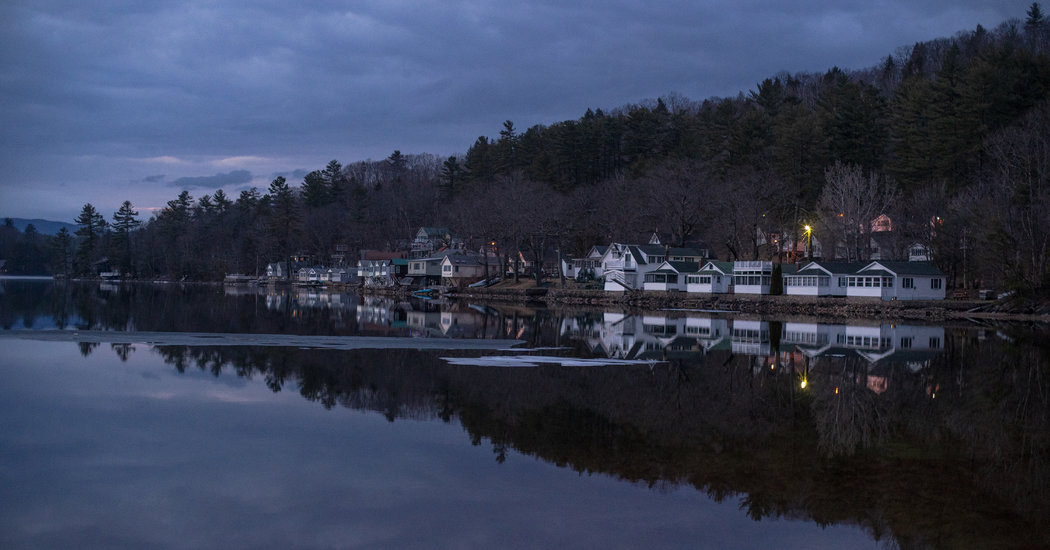 BRISTOL, N.H. — The coronavirus itself was slow to arrive in Bristol, a lakeside town of 3,300 people. The economic destruction came swiftly.

By the end of March, with just a few local cases confirmed, gift shops, yoga studios and restaurants had all shut their doors. Hundreds lost jobs, contributing to a record surge in national unemployment claims.

But at least the Freudenberg factory was running at full strength. The factory, which employs 350 people and makes bonded piston seals and other components for carmakers around the world, has an outsize impact on Bristol’s economy.

Besides paying employees their salaries and the town taxes, the factory — part of a German industrial conglomerate — is the largest customer of Bristol’s sewage and water systems, a linchpin of the annual budget.

“Freudenberg is our lifeblood,” Nik Coates, the town administrator, said in an interview on April 2. “If that plant was ever to close or significantly reduce operations, that would put us in a world of hurt.”

As the coronavirus upends economic life around the world, small towns like Bristol are particularly vulnerable. Freudenberg is its lone large employer. There are just a few national chains — a Dunkin’, a Rite Aid and a Dollar General. And many of the small locally owned businesses depend on seasonal residents, who flock to Newfound Lake during the summer, doubling the town’s population for a few months.

The community has tried to come together in recent weeks, with residents extending help to one another and trying to support local establishments. But with unemployment ballooning and the threat of worse financial pain to come, neighborly good will is worth only so much over the long term.

On April 3, the bad news started to spread around town. Freudenberg announced it was firing more than 100 people, shutting down its manufacturing of bonded piston seals and looking for additional buyouts. With car sales around the world essentially halted, automakers were suspending operations, and suppliers like Freudenberg were suddenly without revenue to pay workers in places like Bristol.

The factory has been operating for decades, and is a point of pride for the town. Some years ago, Ford Motor named it one of the carmaker’s best suppliers. The layoffs, however predictable they may have been, were a blow to Bristol’s morale. Several people affected by the layoffs declined to be interviewed, not wanting to upset the biggest employer in town.

“Managing this is going be difficult for sure,” Mr. Coates said after learning about the layoffs.

Much of Bristol has now ground to a halt. Restaurants were among the first to close last month. The Homestead, a popular spot where locals splurge on crab-stuffed haddock and lobster rolls, tried to do takeout. But after a week of losing money, Mark McDonough, who owns the Homestead and four other restaurants in the state, shut it down.

“It’s been a heartbreaking couple of weeks here,” he said. “Companywide, we’ve had to send about 225 people to the unemployment line.”

Mr. McDonough’s other restaurants, which are in larger cites, continue to serve takeout. Still, sales are down nearly 90 percent, and waiters and dishwashers are out of work. Hoping to help, Mr. McDonough bought his employees gift cards and is serving them free meals.

Bristol’s best-known local business was also quick to close. TwinDesigns, a gift shop run by the twin brothers Jim and Brad Tonner, features merchandise celebrating a 51-year-old turtle named Diane, who is on display in a small back room. Business normally picks up in the summer, when tourists buy turtle books, puzzles and stuffed animals.

“If this goes on too long, we won’t survive,” Brad Tonner said. “This is going to kill small-town America.”

Even those businesses that have remained open are struggling. Dawna Shackley invested her life savings last year to open a graphic design and printing shop, Newfound Impressions. Business was going well, allowing her to hire her first employee in January.

Now sales have shriveled, from about $20,000 a month before the crisis to just $1,500 in March. Ms. Shackley fired her employee. Her last two printing jobs were both related to the virus: 6,000 brochures about good hygiene for a hospital, and a few banners for the town with information about the crisis.

“At this point, I’m not sure how long I can last,” Ms. Shackley said. “I figure I’ve got another two or three months.”

Some businesses are seeing an uptick in sales. In the days after Gov. Chris Sununu ordered nonessential businesses closed, people lined up in the parking lot at Skip’s Sport Shop, the town’s gun store. Hannaford, a grocery store, has been busy, and is offering a senior hour from 6 to 7 some mornings. Aubuchon, a regional hardware chain, is offering curbside pickup.

Locals have tried to support one another with acts of kindness, however small. Jason Briand, owner of a flooring company, is posting videos that instruct residents how to apply for federal loans. Cathy Bannan Redman, a Bristol resident, organized a team of 60 volunteers to shop for the town’s elderly and immuno-compromised.

“I come from a long line of helpers,” said Ms. Redman, whose parents volunteered in Bristol over the years.

Small businesses are trying to do their part, too. The town’s gym, Kilter Fitness, is letting members use its weights at home. Newfound Yoga is streaming classes online. LinCross, a sandwich shop that is still serving takeout, distributed free toilet paper. A distillery donated a gallon jug of hand sanitizer it had made to the Police Department, which was running low.

“What we lack in monetary resources we make up for many times over in community involvement,” Mr. Coates said.

“There was a lot of anti-Chinese sentiment,” said Hector Hsu, the owner, who was born in China and is completing his Ph.D. in aerospace engineering at the Massachusetts Institute of Technology outside Boston, 100 miles south.

Mr. Hsu opened Very Excellent last year, believing it would be a welcome distraction from his studies. Last month, as the virus spread in Boston, Mr. Hsu decided to move to Bristol full time. He starts each day at Very Excellent, where he obsesses about health and hygiene.

“I check everyone’s temperature in the morning and yell at them to sanitize,” he said.

In recent weeks, Very Excellent rolled out a reduced-cost menu of takeout meals, and as people have hunkered down, orders have picked up. Mr. Hsu is now breaking even and hopes to avoid layoffs.

Still, there are gnawing concerns about the town’s future. Any economic recovery, whenever it does arrive, may take that much longer to reach places like Bristol, which celebrated its bicentennial last year.

Already, Mr. Coates is concerned that the share of tourism revenue that Bristol receives from the state is going to shrivel. That could affect basic services that keep residents safe and draw visitors to Newfound Lake, which is exceptionally clean and surrounded by forested hills.

“Running a town is more than just keeping the lights on and paying your employees,” he said. “It’s things like taking care of the beaches and replacing our defibrillators.”

A major test of Bristol’s resilience will come this summer, when second homes around Newfound Lake fill up. Though Mr. Coates isn’t even sure the town will open its beaches, some year-round residents are already worried that a surge of visitors could spread the virus.

Yet if the crowds don’t show up, the economy will suffer that much more. “The seasonal businesses will be killed if this isn’t over by the summer,” Mr. Coates said.

And then there is the Freudenberg factory. In a statement, the company said that the layoffs were temporary, and that it anticipated “that the facility will be back on line as soon as our customers and suppliers, themselves, return to normal operations.”

The problem is, no one knows when that will be.

“My concern is that this thing drags on for a year or spikes again,” Mr. Coates said, “and our businesses don’t come back.”