This Time, Hardly Anyone Followed Trump’s Lead on Virus Drugs 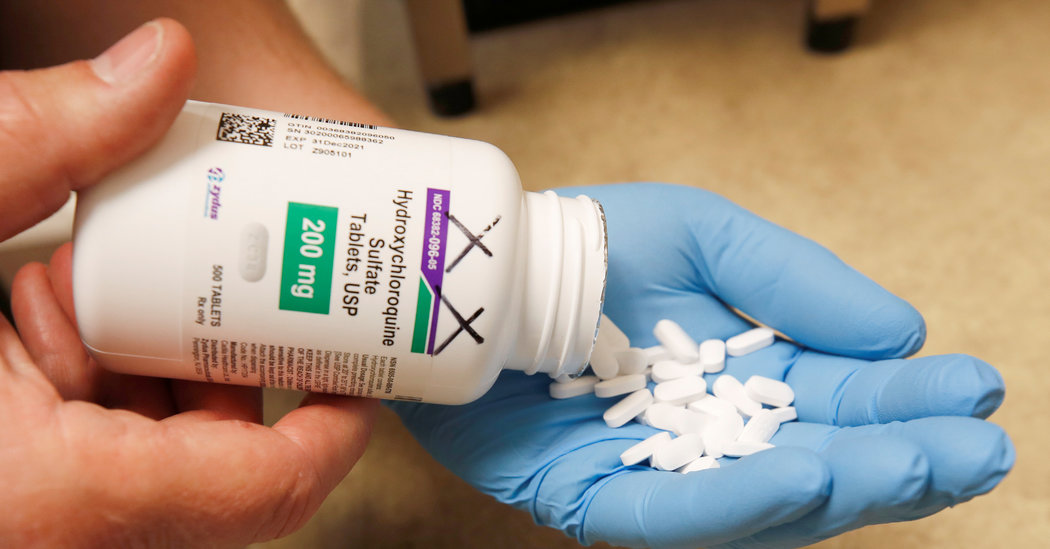 Newly compiled prescription data shows that President Trump’s decision to take an antimalarial drug to ward off the coronavirus did not inspire many Americans to do the same, reflecting the fast-changing landscape surrounding the virus and efforts to treat it.

First-time prescriptions ticked up by only several hundred the day after Mr. Trump mentioned at a White House event on May 18 that, as a preventive measure, he was taking one of two antimalarial drugs he had touted, according to nationwide data analyzed by The New York Times.

That increase paled in comparison to the tens of thousands of first-time prescriptions that poured into retail pharmacies after Mr. Trump first promoted the two medications during a White House telecast two months earlier.

The drugs, chloroquine and hydroxychloroquine, have not been proven to treat Covid-19 and have been fiercely debated as a potential cure or prophylactic measure, despite warnings from medical experts about their efficacy and possibly dangerous side effects.

First-time prescriptions of the drugs in retail pharmacies have remained higher than usual since the pandemic began, averaging about 2.25 times their previous weekday rate, according to the analysis.

By the evening of March 19, the day the president first praised the drugs on television, the rate of first-time prescriptions had surged to more than 46 times the weekday average, the highest level to date. By contrast, on May 19 — the day after Mr. Trump revealed in the late afternoon that he had begun taking one of the drugs — the rate changed comparatively little: rising to about 2.8 times the average, the equivalent of about 400 prescriptions. The level remained slightly elevated for most of the week.

The stark difference could be explained in part by the timing of the two announcements, said Dr. Walid Gellad, who leads the Center for Pharmaceutical Policy and Prescribing at the University of Pittsburgh.

By May, the initial wave of fear and uncertainty about the virus had lessened, he said, and more was known from scientific studies about the questionable benefits — even possible harm — of taking the two drugs.

Even the president taking one of the medications might not be enough to counter those developments.

In addition, Dr. Gellad said, the pool of people inclined to take the drugs may have been depleted by May. “People who were going to do this already did it,” he said. “They already have it in their cabinet.”

The prescription data analyzed by The Times was compiled by IPM.ai, a subsidiary of Swoop, a company in Cambridge, Mass., that specializes in health care data and analytics based on artificial intelligence. The data did not include the identities of the prescribers or the patients.

Last week, the White House press secretary Kayleigh McEnany said Mr. Trump reported “feeling perfect” after taking hydroxychloroquine and suggested he would take it again if exposed to the virus. The president has said he took a short course of the drug because two people in the White House had tested positive for the virus.

Since Mr. Trump’s enthusiastic backing of the drugs, warnings about them have popped up with considerable regularity, including from within his administration.

In late April, the Food and Drug Administration cautioned against using the drugs outside a hospital or clinical trial because they could lead to serious heart rhythm problems in coronavirus patients.

At least 40 states have restricted the medications’ availability in some way, for instance barring pharmacists from dispensing them unless the prescription includes a diagnosis of a condition the drugs are proven to treat. (Hydroxychloroquine was developed to treat malaria and is frequently prescribed for lupus and other autoimmune diseases like rheumatoid arthritis. It is closely related to chloroquine, which is also used to treat malaria.)

Early in the pandemic, reports from doctors in China and France that the drugs might help coronavirus patients fueled interest in scientific and medical communities in the United States. Some people have suggested that taking the drugs prophylactically could guard against infection or lessen its severity, although a study published this week in The New England Journal of Medicine found that hydroxychloroquine did not prevent Covid-19 in 821 people who had been exposed to patients infected with it.

In March, more than 40,000 health care professionals were first-time prescribers of the drugs, which are typically prescribed by doctors from a narrow band of specialties, like rheumatology. But it expanded to include cardiologists, dermatologists, psychiatrists and even podiatrists, according to the prescription data.

State pharmacy boards reported then that doctors had been writing prescriptions for themselves and their family members, which some doctors explained as prudent given their interaction with patients.

The data analyzed by The Times both in March and May did not include drugs prescribed to patients in hospitals, where some doctors have administered the medications, or those released to hospitals from the Strategic National Stockpile. The data is anonymized and based on insurance claims filed for about 300 million patients in the United States, representing approximately 90 percent of the country’s population.