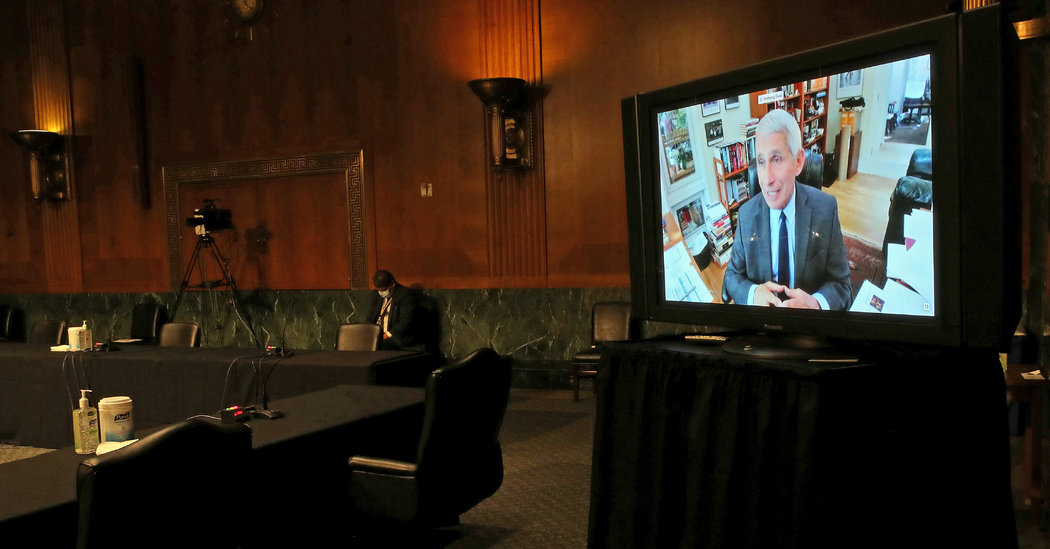 The scientists and public health officials who are leading the federal government’s response to the coronavirus pandemic on Tuesday painted a sobering picture of a country ill-prepared to reopen and contain the spread of the virus in the coming months.

At a Senate hearing, the officials cautioned that a vaccine will almost certainly not come in time to protect students for the return to school in the fall, that a recently authorized treatment is not a game-changing advance and that states must rebuild their depleted public health systems by hiring enough people before they can effectively track the spread of the virus and contain it.

The nation’s top infectious disease expert, Dr. Anthony S. Fauci, warned that if parts of the country reopen too quickly, “there is a real risk that you will trigger an outbreak that you may not be able to control, which, in fact, paradoxically, will set you back.”

Dr. Fauci said that would not only lead to “some suffering and death that could be avoided but could even set you back on the road to try to get economic recovery, because it would almost turn the clock back rather than going forward.”

The discourse at the hearing, before the Senate Health, Education, Labor and Pensions Committee, contrasted with the victorious tone that President Trump has taken in news conferences, when he has frequently exaggerated the adequacy of the country’s testing and has emphasized the imminent need for the country to reopen.

Instead, Republican and Democratic senators alike spent hours seeking detailed information from the four experts, who, in addition to Dr. Fauci, included the heads of both the Food and Drug Administration and the Centers for Disease Control and Prevention, and the top federal official overseeing testing. The topics included whether children should be included in clinical trials for vaccines, how often nursing homes should be tested, the availability of dental care and the consequences of keeping children out of school for too long.

The question of testing and contact tracing — why it is still inadequate, and whether it can be scaled up enough to safely allow communities to reopen — came up repeatedly from senators of both parties.

Dr. Robert Redfield, the director of the C.D.C., said that the coronavirus outbreak “went beyond the capacity” of the government’s contact tracing program, and conceded, “We lost the containment edge.”

He said the C.D.C. had retrained 500 people nationwide to help build up the contact-tracing capacity that states would need to prepare for the fall and winter. He also made several comments that reflected his dissatisfaction with the nation’s fragmented public health network, and his agency’s outdated system of tracking and analyzing critical data from the states.

Adm. Brett P. Giroir, the assistant secretary of health who is overseeing the government’s testing response, testified that the administration is planning to send 12.9 million testing swabs to states over the next four weeks, and that by September, the country will have the ability to conduct 40 to 50 million tests per month.

He also pointed to new technologies, such as a recently approved antigen test, that could further increase the capacity. The volume of testing in the United States has been steadily increasing, with nearly 400,000 new tests processed on Monday, a daily record, according to the Covid Tracking Project. But that is still not at the level that many public health experts say will be needed to safely reopen society. Some experts have said that millions of people per day must be tested in order to quickly identify hot spots and get the virus under control. That would be far more than the number Admiral Giroir was promising.

Shipping millions of swabs to states does not guarantee that they will immediately begin to scale up testing. In recent weeks, the availability of supplies has eased and many testing sites are no longer experiencing shortages, but other bottlenecks have limited the number of tests that can be done, including having enough workers to take samples from patients and enough protective equipment to keep the workers safe.

On Monday, a coalition of public health organizations sent a letter to Congress asking for at least $7.6 billion to increase the contact tracing work force in the United States. The organizations say they need an additional of at least 100,000 contact tracers, 10,000 supervisors and 1,600 epidemiologists to rapidly build contact tracing capacity in response to the coronavirus pandemic.

During the hearing, Dr. Redfield said a national surveillance system for the virus was being developed with a special focus on nursing homes — where a third of the nation’s deaths from the coronavirus have taken place. Facilities must report all infections in both residents and staff members to public health authorities, and notify residents’ family members when there are cases in their facilities, he said, but he was uncertain about the timing of carrying out such guidelines.

“I’m pretty confident it’s operational, but I need to double check just to make sure,” he said.

The closing of schools and universities has represented one of the biggest upheavals in the outbreak. It is not clear what role children and young people play in the spread of the coronavirus, yet, at the same time, keeping schools closed prevents their parents from returning to work, a major impediment to economic recovery.

“If we keep kids out of school for another year, what’s going to happen is the poor and underprivileged kids who don’t have a parent that’s able to teach them at home will not get to learn for a full year,” said Senator Rand Paul, Republican of Kentucky, who also noted that children and young people die at a far lower rate than older people.

Dr. Fauci pushed back, however, saying that the virus’s effect on children is still not well understood. “We really better be very careful, particularly when it comes to children, because the more and more we learn, we’re seeing things about what this virus can do that we didn’t see from the studies in China or in Europe,” he said.

He pointed to recent cases of children who have tested positive for the virus and have developed a serious inflammatory syndrome similar to a rare condition known as Kawasaki disease.

Dr. Fauci and others said that the answer might be that schools would reopen differently throughout the country, depending on the state of the local outbreak. “It is not going to be universally homogeneous,” he said.

Other questions were raised about how students would be tested once schools reopened, especially at colleges and universities. Admiral Giroir, the assistant secretary of health, said that college students could be tested using rapid tests that are expected to be more widely available in the fall.

“It’s certainly possible to test all of the students,” he said, adding that there could be a surveillance plan to test students at different times to identify the virus if it started to spread. He also pointed to experimental technologies, such as testing wastewater for the coronavirus, to see if the virus was circulating in the population.

The race for a vaccine

Scientists hope to know by late fall or early winter whether they have at least one possible effective vaccine, Dr. Fauci told the senators.

Several experimental vaccines are already being tested in humans, including one that Dr. Fauci said his institute has been heavily involved in, made by the company Moderna. But Dr. Fauci cautioned, “Even at the top speed we’re going, we don’t see a vaccine playing in the ability of individuals to get to school this term.”

Although Dr. Fauci said he was “cautiously optimistic” that an effective vaccine would be developed, he warned there was no guarantee that it would happen. “You can have everything you think that’s in place, and you don’t induce the kind of immune response that turns out to be protective and durably protective,” he said.

Another concern was “disease enhancement,” the possibility that a vaccine could induce an immune response that would make the illness worse instead of protecting people from the virus. “We want to make sure that doesn’t happen,” Dr. Fauci said, adding, “I still feel cautiously optimistic that we will have a candidate that will give some degree of efficacy, hopefully a percentage enough that will induce the kind of herd immunity that would give protection to the population as a whole.”

Dr. Stephen Hahn, commissioner of the Food and Drug Administration, said his agency would evaluate about 10 vaccinate candidates in early studies, and then select four or five to progress into larger studies in humans.

He said the F.D.A. would also make sure that there were enough vials, needles, syringes and other products needed to administer a vaccine.

“We’ve been leaning in on the supply chain to ensure that when a vaccine is ready to go, we will have the necessary supplies to actually administer it and operationalize the vaccination,” Dr. Hahn said.

Asked by Senator Patty Murray, Democrat of Washington, what steps had been taken to make sure clinical trials for treatments and vaccines account for racial and ethnic disparities, Dr. Fauci replied that the clinical trials were designed with sites chosen to include both minority populations and populations at high risk.

Senator Bernie Sanders of Vermont pressed the officials to guarantee that if a vaccine becomes available, it will be available for free to everyone, regardless of insurance status or ability to pay. Dr. Hahn said he shared that concern, but when Mr. Sanders asked if that meant he would make sure everyone had access, Dr. Hahn replied, “ Sir, the payment of vaccines is not a responsibility of the F.D.A., but I’m glad to take this back to the task force.”

Mr. Sanders then addressed the admiral, asking him: “Mr. Giroir, do you think we should make that vaccine, when hopefully it is created, available to all regardless of income? Or do you think that poor people, working people, should be last in line for the vaccine?”

Admiral Giroir agreed that everyone should be able to get a vaccine, but also added that he did not control whether that was the case. “I will certainly advocate that everyone is able to receive the vaccine regardless of income or any other circumstance,” he said.

Mr. Paul, the Kentucky senator, made a series of assertions about the medical science that were intended to suggest that reopening parts of the country might not be as dangerous as public health experts have suggested.

Mr. Paul, who is also a physician, cited a series of studies suggesting that recovered Covid-19 patients have some form of immunity, and said that the findings were not being reported by the news media. In fact, the findings have been covered widely by The Times and other news outlets. Governments worldwide have seized on the findings to suggest that widespread use of antibody testing may be the key to reopening economies.

The few antibody surveys available suggest that fewer than 5 percent of Americans have been exposed to the virus and may have antibodies, except in places like New York City and the Bay Area in California. That means that a vast majority of Americans are still vulnerable to the virus.

The World Health Organization recently reminded government officials that scientists still did not know how strong immunity might be in recovered patients, or how long it could last.

Mr. Paul cited Sweden, which has generally allowed businesses to stay open, as a model for coping with the pandemic. But the jury is still out: The Covid-19 death rate in Sweden is actually higher than that in the United States.