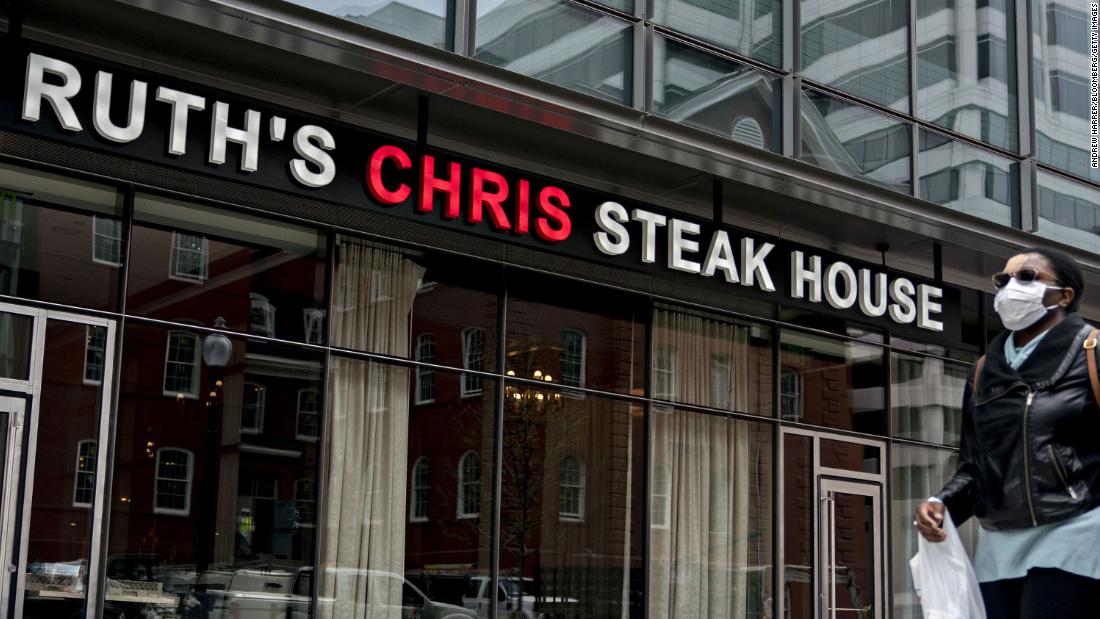 Now the government is hoping the others pay up.

“It is unlikely that a public company with substantial market value and access to capital markets will be able to make the required certification in good faith, and such a company should be prepared to demonstrate to Small Business Administration, upon request, the basis for its certification,” according to the Treasury guidance released Thursday. ” … Any borrower that applied for a PPP loan prior to the issuance of this guidance and repays the loan in full by May 7, 2020, will be deemed by SBA to have made the required certification in good faith.”

In other words, the Treasury wants its money back.

And later that day, Ruth’s Chris said it would oblige.

“We intended to repay this loan in adherence with government guidelines, but as we learned more about the funding limitations of the program and the unintended impact, we have decided to accelerate that repayment,” Cheryl Henry, Ruth’s Hospitality president and CEO said in an emailed statement to CNN Business. “We remain dedicated to protecting our hardworking team. It is our hope that these funds are loaned to another company to protect their employees, just as we intended.”

More than 175 publicly traded companies received north of $650 million in PPP loans this month as of Thursday afternoon, according to a CNN Business review of filings made with the US Securities and Exchange Commission. And those numbers are quickly growing, according to data analytics firm FactSquared, which has its artificial intelligence bot named Margaret crawling through regulatory filings and compiling a database in real-time.

“One, I think it’s a definition problem,” Prisinzano said. “Two, I don’t think the bill was really targeted at the small guys.”

People hear “small business” and think of the mom-and-pop shop down on Main Street; but by US Small Business Administration standards and the terms of the PPP, the vast majority of American businesses now are considered to be small enterprises, he said.

Businesses with fewer than 500 employees now account for 99.7% of American firms, Prisinzano said, citing US Bureau of Economic Analysis data. The remaining 0.3% of companies with 500 or more employees — which include the nation’s largest businesses such as Walmart (WMT) and Amazon (AMZN) — account for more than half of US employment.
The SBA has an expansive table of size standards, classifying small business status across thousands of sectors by aspects such as revenue or total number of employees. Under the agency’s classifications, small enterprises include automakers and oil refineries that employ up to 1,500 people, and movie theaters and software companies with $40 million in annual sales.
The PPP requirements referenced the SBA size standards, but, thanks to a heavily lobbied exemption, also allowed for food service and hospitality organizations with multiple locations to apply so long as they employed fewer than 500 people at each place of business. When the Senate approved an additional $310 billion for the program this week, the bill referenced ensuring funds for smaller financial institutions and credit unions but did not go so far as including restrictions on applicants.

“Funds from any canceled loans will be returned to the PPP program,” Shannon Giles, an SBA spokesperson said in an emailed statement to CNN Business. In the event that a loan is canceled after the PPP funds expired last Thursday, those funds cannot be used until Congress reauthorizes additional funds for the program as to not violate the Anti Deficiency Act.”

Some of the public companies that received the loans told CNN Business that their situations warrant the federal assistance.

“Even though we’re a public company, we’re not a big company,” said Joseph Dowling, chief executive officer of CV Sciences, a San Diego-based company specializing in hemp-derived, CBD-based pharmaceuticals and consumer products. “We understood the guidelines to be for smaller companies like us.”

He added: “Not every public company has the same access to capital.”

CV Sciences (CVSI), following a recent 25-person layoff, is 100 employees in size. Its $2.9 million PPP loan will allow the firm to keep employees and possibly bring back others, he said.

“We’re like everybody else, we’re affected by this,” Dowling said. “We’re a little bit dependent upon brick-and-mortar retailers who are dependent upon customers.”

In a response to a request for interview and questions from CNN Business on Wednesday, an Ashford spokesperson said only that the company has “very few” avenues to access capital.

“The PPP program was specifically designed for companies with fewer than 500 employees per location that are in NAICS Code 72, such as hotel and restaurant chains since many, such as Ashford, don’t qualify for the Main Street Lending program,” Jordan Jennings, an Ashford spokesperson wrote.

But when choosing to apply for these loans, the larger and publicly traded companies are walking a line between what is legal and what is ethical, said Chris Allieri, founder and principal of branding and public relations firm Mulberry & Astor.

“If you are not a small business, you better not touch this thing; this is going to be toxic if you do,” he said. “If you’re in that mix, you’re basically seen as going head to head with small businesses, and that’s as un-American as it gets.”

Some public companies made the point to state they weren’t taking PPP loans.

In its earnings announcement this week, Chipotle Mexican Grill (CMG) specifically noted it would not utilize the PPP loan provision. The company has upward of $909 million in cash and likely will see a $100 million liquidity benefit by “deferring social security tax payments and accelerating tax depreciation in previous returns as allowed by the CARES Act.”

“The SBA provisions of the CARES Act appears to us to be designed to help small businesses and their employees,” Laurie Schalow, Chipotle’s chief corporate reputation officer, said in an emailed response to a CNN Business query. “Our business is different, and we have managed it in a way so that we can support our employees financially even with today’s uncertainties and hope to be able to do so in the future as well.”

Customer-facing brands, such as restaurant chains like Ruth’s Chris and Shake Shack, likely will bear the brunt of consumer backlash, Allieri said, adding that their reputation could be tarnished once Covid-19 stay-in-place orders are lifted.

“I think that we’re going to see this ‘buy local,’ and this real commitment to independent restaurants like we never saw before,” he said. “I think that this is going to push that even further.”

Correction: This article was updated to reflect that the Treasury guidance about the Payment Protection Program was issued Thursday.