Treasury Secretary Mnuchin does not expect recession from the coronavirus 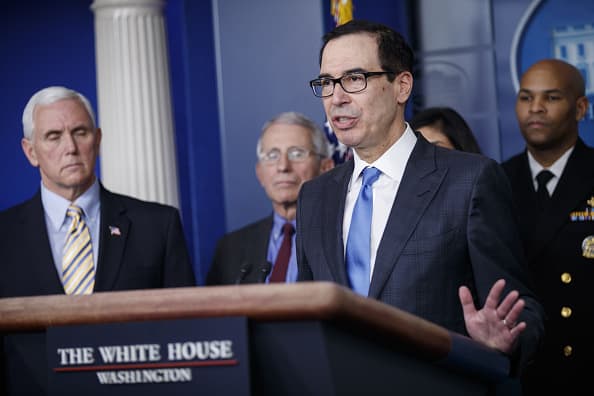 Steven Mnuchin, U.S. Treasury secretary, speaks during a news conference in the briefing room of the White House in Washington, D.C., U.S., on Saturday, March 14, 2020.

Treasury Secretary Steven Mnuchin is confident the U.S. economy will weather the downturn from the coronavirus outbreak, noting he does not expect a recession.

The market’s decline, along with the coronavirus outbreak that has left countries such as Italy in a virtual lockdown, has stoked fears of slower economic growth around the world. Nike closed all U.S. stores. Apple stores are only open in China. American Airlines also announced the suspension of long-haul flights.

But Mnuchin’s confidence on the economy is not shared by everyone. Alan Blinder, an economist and former Federal Reserve vice chairman, told CNBC last week that the economy is probably already in a recession.

“I wouldn’t be one bit surprised if when we look back at the data, it is decided … that the recession started in March,” Blinder said Wednesday. “It takes months to get the data that would be relevant to a call like that. But it wouldn’t be a bit surprising to me.”

“This has really become a major public health crisis, which has in turn curtailed consumer demand,” Cohn told CNN on Friday. “Most likely, I’m willing to say, we are already in a recession. We are having negative growth right now and the market is pricing in that uncertainty.”

Subscribe to CNBC PRO for exclusive insights and analysis, and live business day programming from around the world.