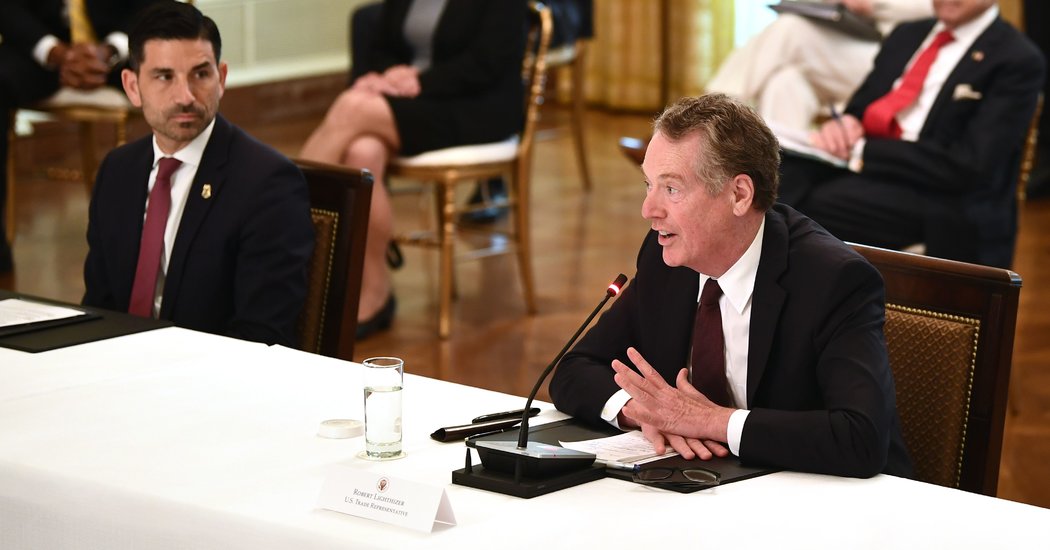 WASHINGTON — The Trump administration said on Tuesday that it would open an investigation into taxes on digital commerce that have been adopted or proposed in nine countries and the European Union, escalating a global battle that will affect where big American tech companies like Facebook and Amazon pay taxes.

The administration’s move could ultimately lead to American tariffs on imports from Brazil, Britain, India and a host of other countries, heightening the chances of another global trade dispute that results in retaliatory taxes on U.S. goods.

The investigation, which will be conducted by the United States trade representative, could also complicate global negotiations that have been underway for more than a year and are seeking a multinational consensus on how to tax internet commerce that crosses borders.

At issue are the efforts, spreading across Europe and beyond, to impose so-called digital services taxes on economic activity generated online. Those taxes break from many traditional international tax regimes by affecting revenues earned by a company where they are generated — regardless of whether the company has a physical presence there. For example, India imposed a 2 percent tax in April on online sales of goods and services to people in India by large foreign firms. The European Union has revived its push for a similar tax as a way to help fund response measures to the coronavirus.

Those moves follow similar efforts by France, which introduced a tax on digital revenues last year, prompting the Trump administration to authorize tariffs on French wine, cheese and other products. Officials in both countries agreed to put their levies on hold — with French officials saying they would not collect revenues from their tax this year — while negotiators with the Organization for Economic Cooperation and Development tried to broker a multilateral agreement on digital taxation.

Jason Oxman, the chief executive of the Information Technology Industry Council, a trade group, said that the organization was in favor of ongoing multilateral discussions, but that it also supported the U.S. government’s new investigations.

The investigations are being carried out under Section 301 of the Trade Act of 1974, which gives the government broad authority to respond to unfair practices that negatively affect U.S. commerce. The administration has used the same legal provision to initiate a trade war with China, which resulted in tariffs on roughly $360 billion of Chinese products.

In addition to India and the European Union, the Office of the United States Trade Representative said it would investigate taxes in Austria, the Czech Republic, Indonesia, Italy, Spain and Turkey.

“President Trump is concerned that many of our trading partners are adopting tax schemes designed to unfairly target our companies,” Robert E. Lighthizer, the trade representative, said in a statement. “We are prepared to take all appropriate action to defend our businesses and workers against any such discrimination.”

While the U.S. has been part of the multinational digital tax discussions, negotiations ran into trouble this year, shortly before the spread of the coronavirus plunged countries around the world into lockdowns. The Trump administration had been pushing for a provision that would effectively allow some American companies to choose whether to be governed by any new tax system created by a global agreement.

The companies that are most likely to be affected by many countries’ digital taxes are American technology giants, including eBay and Google, but some proposals could apply to any large companies that do business online, not just tech firms.

Trade experts have speculated in recent months about whether the Trump administration could try to use its 301 provision as a source of leverage in its efforts to convince other countries, including India, to change their trade practices. The administration tried and failed this year to announce a limited trade deal with India.

While Mr. Trump has frequently used the threat of tariffs to bring other countries to the negotiating table, many businesses have protested that such measures raise their costs and run the risk of provoking retaliation in foreign markets. With the economy in a severe downturn, businesses may be less equipped to bear the pain of trade wars on multiple fronts.