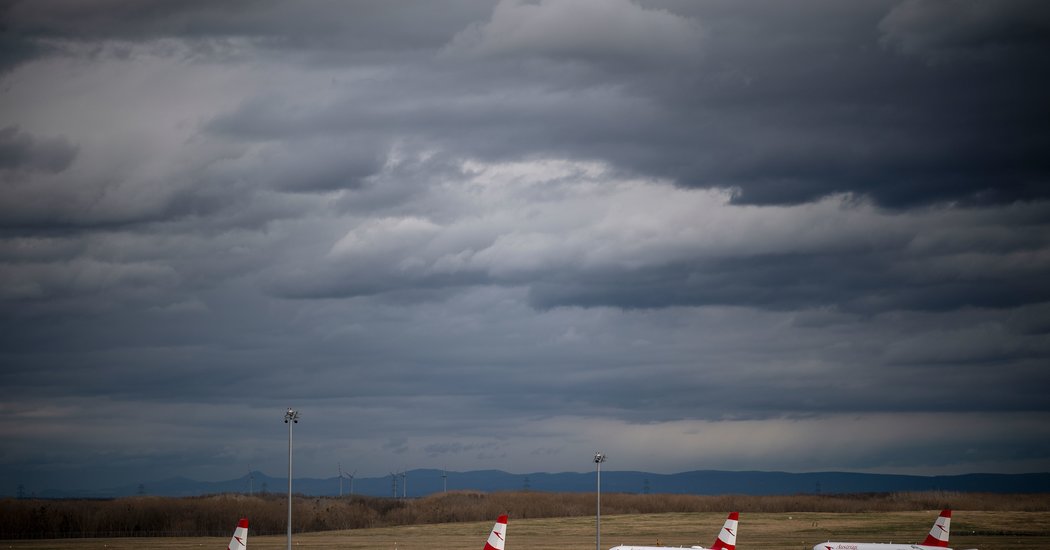 WASHINGTON — The Trump administration is exacerbating an already antagonistic relationship with the European Union just when global health experts and economists are calling for a coordinated global response to the coronavirus.

The administration’s surprise decision Wednesday to ban travelers from the European Union, but not the United Kingdom, where diplomatic relations are better, has sparked speculation that political motivations could underlie the move. President Trump attributed the exception to Britain’s “very strong borders” and its “very good job” fighting the virus.

For now at least, the United States is on course to intensify trading tensions with Europe next week.

A proposed increase in tariffs on European plane maker Airbus is scheduled to go into effect Wednesday, raising costs for airlines now struggling with mounting losses. A visit to Washington next week by the European Union trade commissioner, Phil Hogan, which might have paved the way toward a resolution, has been canceled.

European officials condemned Mr. Trump’s travel ban, which had come without warning or discussions with Europe.

“The European Union disapproves of the fact that the U.S. decision to impose a travel ban was taken unilaterally and without consultation,” they said. “The European Union is taking strong action to limit the spread of the virus.”

Speaking to reporters on Thursday, Mr. Trump said he would quickly re-establish travel with Europe once the danger passed.

“It takes a long time to make the individual calls,” he said. “But we had to move quickly. I mean, when they raise taxes on us, they don’t consult us.”

The travel ban could help to stop the spread of the disease from parts of Europe that are particularly hard hit, like Italy, France, Spain and Germany. But it has faced criticism that its boundaries are somewhat arbitrary.

The United Kingdom, which is not under a ban, had reported 456 cases of coronavirus as of Thursday, more than European countries like Belgium, Austria, Greece, the Czech Republic, Finland and Portugal, which do face the ban.

A White House spokesman said that the declaration applied to Europe’s Schengen area because of the number of cases and its unrestricted travel across 26 national borders, and that it came at the recommendation of health officials.

But Mr. Trump has taken an ad hoc, relationship-based approach to other global policies before — including his decision to exempt Australia from steel tariffs while hitting other allies like Canada, Japan and Europe.

The United States is at odds with Europe over a host of trade issues. While the two sides are working toward a limited trade deal, they are sparring over airplane subsidies, car tariffs, the fate of the World Trade Organization, and plans by France and other European countries to tax American technology companies.

Relations with the United Kingdom have been warmer. British and American leaders have lauded their special relationship and said they are working toward a comprehensive trade deal.

But the United Kingdom has also rankled members of the Trump administration by permitting Huawei into its telecom networks, and it has announced its own plans to move ahead with a digital tax on American technology companies on April 1.

Mr. Trump threw businesses and investors on both sides of the Atlantic into a temporary panic Thursday night, when he asserted in his televised address to the nation that the European travel ban might also extend to all trade in goods.

“These prohibitions will not only apply to the tremendous amount of trade and cargo, but various other things as we get approval,” Mr. Trump said. “Anything coming from Europe to the United States is what we are discussing.”

It was a significant mistake. Within the hour, a White House spokesman walked back the statement, saying that the proclamation applied only to human beings, not goods and cargo.

Frederick Kempe, the president of the Atlantic Council, said in a statement that the president’s speech left many questions.

“Were our most significant allies consulted?” he asked. “Why not coordinate a common cause with them, managing travel and other response together (if it’s necessary)? Why was the UK excluded? This is a time for global democracies to work together and declare common cause, as we’ve done successfully over the past 70 years.”