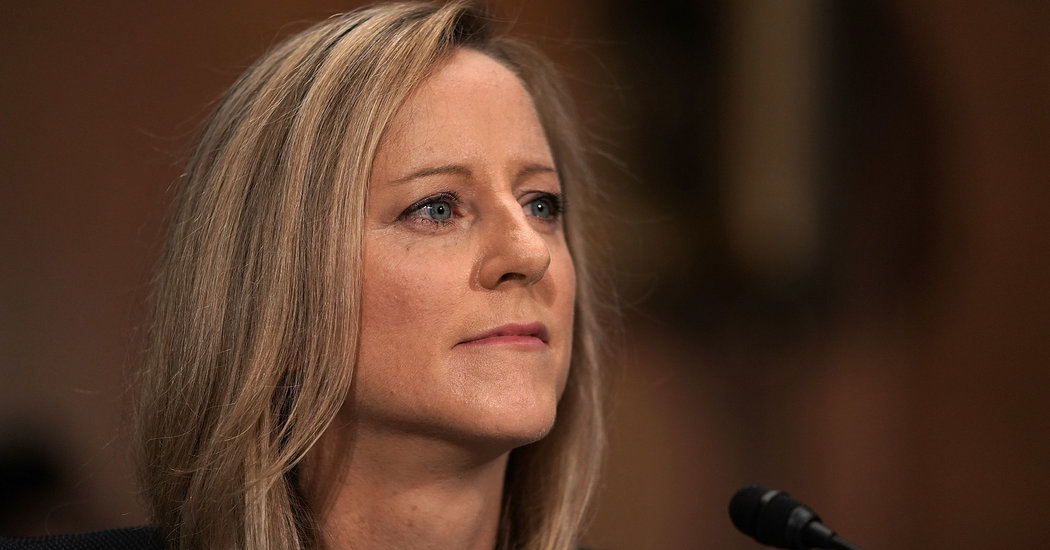 He claimed that President Trump’s appointees at the Consumer Financial Protection Bureau had manipulated the agency’s research process to justify altering a 2017 rule that would have sharply curtailed high-interest payday loans.

The departing staff member, Jonathan Lanning, detailed several maneuvers by his agency’s political overseers that he considered legally risky and scientifically indefensible, including pressuring staff economists to water down their findings on payday loans and use statistical gimmicks to downplay the harm consumers would suffer if the payday restrictions were repealed. A copy of the memo was obtained by The New York Times from a current bureau employee.

Political appointees at the bureau, led by its director, Kathleen Kraninger, have pressed forward with the Trump administration’s deregulatory drive despite the logistical hurdles posed by the coronavirus pandemic. This week, the agency is expected to release the revised payday rule, which will no longer require lenders to assess whether customers can afford their fees before offering a loan.

Payday lending has been a signal battle of the Trump administration’s efforts to dismantle regulations. The consumer bureau’s original rule, an Obama-era initiative finalized in late 2017, was poised to be the first national regulation of payday loans. Democrats in Congress have pressed Ms. Kraninger for details about its proposed revision, with mixed success.

“They’re moving quickly to establish this rule because they think they can take advantage of the time we don’t have to focus on them right now,” said Representative Maxine Waters, a California Democrat who heads the House Financial Services Committee.

The Trump administration “has demonstrated that they are not committed to the mission of the C.F.P.B.,” said Ms. Waters, who urged the bureau to delay issuing the new rule until the pandemic abated. The agency has been working on the revision for more than a year.

Mr. Lanning’s 14-page memo provides an unusually detailed glimpse into the Trump administration’s campaign against the so-called administrative state, where obscure officials labor over small tweaks to fine print that can reshape industries.

Mr. Lanning, who worked at the consumer bureau for seven years, left in August for a position at the Federal Reserve Bank of Chicago.

He said in an email that the memo’s intent was to inform new members of the payday research team about the “history and process” behind the rule revision. He declined to discuss its contents.

Matt Leas, a spokesman for the C.F.P.B., said the agency has “a fair, transparent and thorough” process for making rules. “The comments received and evidence obtained are all taken into consideration before issuing a final rule,” he said. “The director is the ultimate decision maker and ensures that the decisions taken are justified publicly, as is required by law.”

Efforts to dismantle the payday regulation began with the arrival of Mick Mulvaney, the Trump administration budget chief, who was appointed the C.F.P.B.’s acting director in late 2017. Among his priorities was to delay, and eventually undo, the Obama-era payday lending restrictions, which were scheduled to take effect in summer 2019, according to two former senior bureau officials who discussed the issue with him.

But unwinding a federal rule is a long and complicated process. The bureau’s research team had already spent nearly five years gathering and analyzing data on payday lending for the original rule. To avoid having its reversal struck down in court — as dozens of Trump administration regulations have been — the bureau would need to demonstrate that new research or other data had called into question the original rule. That task fell to the agency’s office of research — a group of economists and other social scientists that included Mr. Lanning.

In 20 states, payday lending is effectively banned, but in the places where it remains legal, it has thrived: There are more payday loan storefronts in America than McDonald’s restaurants. Their customers — often working poor people who cannot always secure traditional credit — collectively borrow nearly $29 billion a year and pay nearly $5 billion in fees, according to research by Jefferies, an investment bank.

While short-term loans are intended as an emergency stopgap, many borrowers find themselves unable to repay their debts quickly, and borrow again. Half of all payday loans are extended at least nine times, piling up fees that can exceed the value of the original loan, according to research the consumer bureau published to support its original restrictions.

In 2018, as the agency began re-researching the question under Mr. Mulvaney’s directive, it became clear that the Trump administration wanted to scrap the 2017 rule, according to five people familiar with the office’s work.

In his memo, Mr. Lanning indicated that the bureau’s leadership, bolstered by a new layer of political appointees installed by Mr. Mulvaney, had manipulated the reconsideration process to steer it toward that goal. As early as May 2018, while Mr. Mulvaney publicly claimed to be keeping an open mind about the reconsideration, bureau economists were told that Mr. Mulvaney had decided to abolish core provisions of the payday rule. They were directed to research only his preferred changes, without analyzing whether alternative approaches would yield a better outcome for consumers or industry.

Mr. Mulvaney did not respond to a request for comment.

Political officials with “fundamental misunderstandings” about the agency’s research pressured the bureau’s economists to use “inaccurate and inappropriate” data, Mr. Lanning wrote. In the end, most of the changes that Mr. Mulvaney’s team wanted to incorporate didn’t make it into the final draft, according to three people involved in the bureau’s internal discussions.

But some survived. In the proposal for the rule revision, Mr. Mulvaney’s deputy at the time, Brian Johnson, inserted language that was intended to show that the changes would cause consumers less harm than the bureau’s economists estimated.

The bureau had projected that its original rule would cut payday loan volume by at least 62 percent. That would save consumers some $4 billion a year in fees, according to calculations by The Times.

For any revision, the economists were required, under the Dodd-Frank law, to analyze how the proposed changes would affect consumers. But Mr. Johnson argued that since the original rule’s “ability to pay” underwriting requirements — which asked lenders to assess whether a loan seeker could pay the fees — had not yet taken effect, abolishing them would have no practical effect on consumers.

When career staff members warned that Mr. Johnson’s method was frowned on by federal rule-making bodies and had hampered other Trump deregulatory efforts in federal court, they were overruled by Tom Pahl, another agency official installed by Mr. Mulvaney. The final draft rule contained both Mr. Johnson’s method — stating that consumers would feel “little effect” from the Trump administration’s proposed changes — along with a more traditional economic analysis from the bureau’s research staff, which concluded that the changes would have a negative impact on borrowers.

Mr. Johnson, previously a Republican staff member for the House Committee on Financial Services, left the consumer bureau in February to join Alston & Bird, a Washington lobbying and law firm. He did not respond to an email seeking comment on his work at the bureau.

Mr. Lanning was especially scathing about one new agency employee who became heavily involved in the research group’s work: Christopher Mufarrige, a young lawyer with a master’s degree in economics, who joined the bureau in fall 2018 on a temporary assignment and reported to Mr. Johnson.

Three former bureau employees who worked with Mr. Mufarrige said he had often criticized the 2017 rule as flawed and unnecessary. Mr. Lanning’s memo complained about Mr. Mufarrige’s “attempts to selectively cite evidence” and his pattern of making “critical errors on basic economics.”

Mr. Mufarrige declined to comment on Mr. Lanning’s allegations. He left the bureau in December and now works at a Washington law firm.

Ms. Kraninger, who took over the consumer bureau in late 2018, signed off quickly on a draft of the revised rule. According to Mr. Lanning’s memo, she conducted a single staff-level review of the proposal: a 45-minute meeting in January 2019 that began late and focused on the legal reasoning behind the revised rule. There was little discussion of the evidence or research behind it.

The next month, the bureau proposed gutting its prior rule, which, the agency said, had drawn on data that was “not sufficiently robust and reliable.”

Payday lenders praised the turnaround. The original rule was “motivated by a deeply paternalistic view that small-dollar loan customers cannot be trusted with the freedom to make their own financial decisions,” said Dennis Shaul, the chief executive of the Community Financial Services Association of America, a trade group.

But consumer advocates said the about-face wasn’t supported by any new evidence or industry changes. A 220-page comment letter, signed by 12 groups, criticized the revision as an “exercise in grasping for straws” and suggested that they would challenge it in court.

“The bureau didn’t come up with the rule on a whim,” said Linda Jun, a senior policy counsel for Americans for Financial Reform, a consumer advocacy group. “To this day, despite many people asking, they haven’t provided anything about the basis for changing this rule beyond some vague references to new research. It’s hard to see the reversal as anything other than political.”