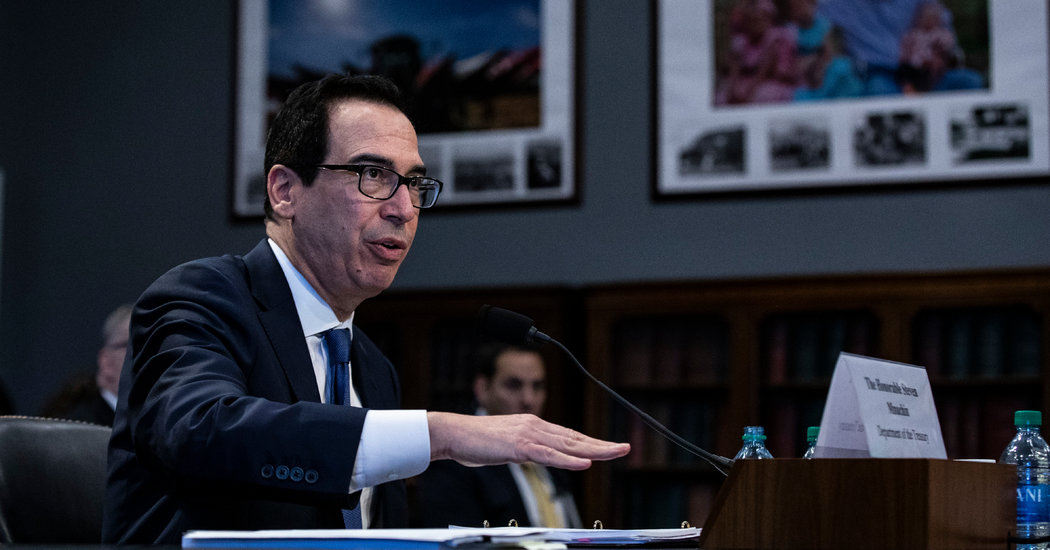 WASHINGTON — President Trump and his advisers are considering using the Federal Emergency Management Agency as a vehicle to deliver funds to stimulate the economy against mounting damage from the coronavirus, a move that could allow the administration to begin bolstering growth without waiting for Congress.

The idea is one of many options under consideration by the administration to help stimulate the economy, which is facing a slowdown from a virus that is quarantining workers and consumers, scuttling vacations, closing factories and causing other disruptions.

Mr. Trump previewed several ideas at a news conference on Monday evening, but discussions remain in flux and many of the proposals would require congressional approval at a time of deep partisan ire and with the 2020 election looming.

Larry Kudlow, director of the National Economic Council, and Treasury Secretary Steven Mnuchin will brief Senate Republicans at their weekly lunch and discuss cutting the payroll tax, offering financial help for workers who don’t get paid sick leave, and providing targeted relief for industries battered by the virus, including cruise lines, airlines and hotels.

They could also raise the possibility of Mr. Trump moving to approve major disaster declarations in a growing number of states that have seen coronavirus outbreaks, according to officials in the administration and in Congress. Such approvals would allow FEMA to begin distributing aid to affected individuals, such as emergency food stamps, and to states and local governments for efforts including “emergency protective measures.”

Mr. Trump’s advisers remain divided over how large of a stimulus package to send to Congress, and what to include in it, with many advisers worrying that too large of a request could feed fear among investors and consumers by suggesting the economy is weaker than it actually is.

The idea of a payroll tax cut in particular has divided Mr. Trump’s advisers, with Mr. Mnuchin and Mr. Kudlow expressing concerns about the cost, whether it would address the problems caused by the virus and what Democrats would demand if they reopen the tax code.

However, Peter Navarro, Mr. Trump’s trade adviser, has been a proponent of the idea, and Mr. Trump has been pushing for it to be included in a package of options.

Mr. Navarro has often been at odds with Mr. Trump’s other economic advisers over trade policy. His appearance with the coronavirus task force at Mr. Trump’s White House briefing on Monday raised eyebrows among some officials who wondered if he had inserted himself into the fiscal stimulus discussion.

Mr. Navarro said in an interview that he was there at the president’s request.

“The president specifically asked during the Oval meeting that I, by name, and other members of his economic and trade team stand with him on the podium and I left when the president left,” Mr. Navarro said.

Congressional Republicans have given the possibility of a payroll tax cut a cool reception, and Republicans aides were skeptical on Tuesday that it would be included in a final package submitted by the administration. Such a package is likely to be worked out in advance by administration officials and top Republicans and their staff in the Senate, which Republicans control.

Officials inside the administration and on Capitol Hill stressed on Tuesday that the details of any such plan were not yet finalized, and that meetings that Mr. Kudlow and Mr. Mnuchin were holding with senators on Tuesday would help to narrow them toward a consensus package.

Leaders in the Democratic-controlled House have also reacted with skepticism to the payroll tax plan. They have pushed for the administration instead to ramp up spending on the public health response to the virus.

One area of agreement among Republicans and Democrats is the need for any package to include government-provided sick pay to workers who are unable to perform their jobs as a result of quarantines or caring for children whose schools are canceled over virus fears. It is unclear how such a program would work and how it would ramp up fast enough to prevent affected workers from missing payments on rent, credit cards or other bills.

Markets rallied on Tuesday morning on news of the stimulus request, after suffering steep losses Monday. But several congressional aides cautioned it will likely take weeks, at minimum, to complete and approve any stimulus bill.

The White House is also considering other plans that would not require congressional action, such as allowing tax payments to be deferred. Mr. Trump said on Monday that the White House would hold another news conference at some point on Tuesday laying out stimulus measures in more detail.

While his advisers worked on the package, Mr. Trump on Tuesday called the Federal Reserve “pathetic” for keeping interest rates too high, renewing a regular gripe as coronavirus spreads both globally and domestically, roiling markets and threatening the economic outlook.

“Our pathetic, slow moving Federal Reserve, headed by Jay Powell, who raised rates too fast and lowered too late, should get our Fed Rate down to the levels of our competitor nations,” he tweeted. “The Federal Reserve must be a leader, not a very late follower, which it has been!”