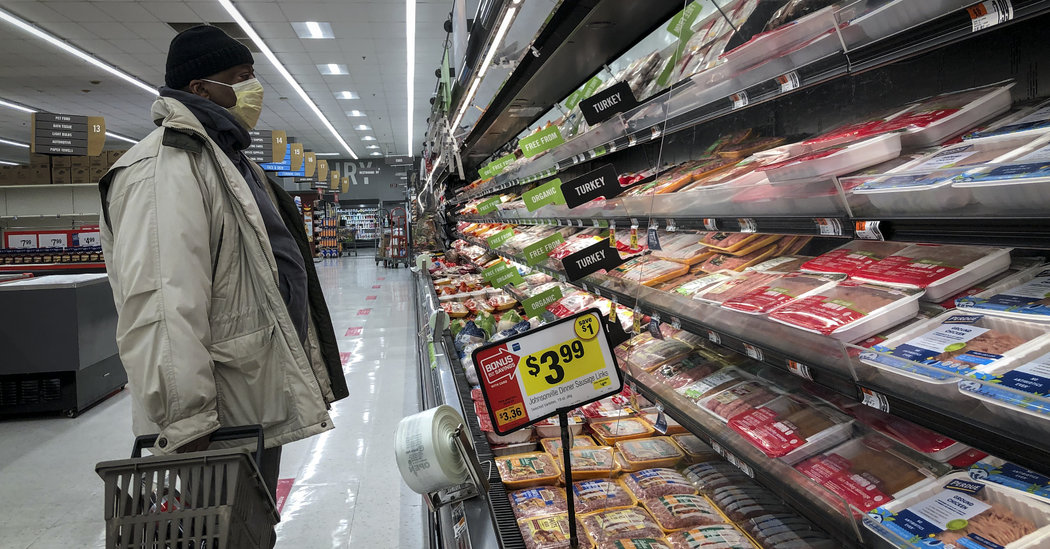 WASHINGTON — President Trump on Tuesday declared meat processing plants “critical infrastructure,” in an effort to ensure that facilities around the country remained open as the government tried to prevent looming shortages of pork, chicken and other products as a result of the coronavirus.

The action comes as meat plants around the country have turned into coronavirus hot spots, sickening thousands of workers, and after the head of Tyson Foods, one of the country’s largest processors, warned that millions of pounds of meat would simply disappear from the supply chain.

The president said his administration would “take all appropriate action” to ensure that meat and poultry processors “continue operations” consistent with federal health and workplace safety guidance.

While Mr. Trump said the step would ensure an ample supply of “protein for Americans,” the announcement provoked swift backlash from unions and labor advocates, who said the administration needed to do more to protect workers who often stand shoulder to shoulder in refrigerated assembly lines. At least 20 workers have already died of the coronavirus, the United Food and Commercial Workers International Union said.

On Sunday, the Centers for Disease Control and Prevention and the Occupational Safety and Health Administration issued guidelines calling for physical distancing and other measures to keep workers safe. But the guidelines are voluntary, and food safety and labor advocates said they feared that meat companies would not follow them.

“Using executive power to force people back on the job without proper protections is wrong and dangerous,” Richard Trumka, the president of the A.F.L.-C.I.O., wrote on Twitter, saying he echoed calls by the food workers’ union “to put worker safety first.”

Processing plants around the country have shut down amid outbreaks, putting a strain on the nation’s slaughtering capacity and prompting food companies to warn of coming shortages at supermarkets. Farmers have begun killing pigs and chickens they can no longer sell to companies for processing.

In addition to the action, which was taken under the Defense Production Act, a Korean War-era law, the Labor Department and OSHA issued guidance that would provide additional liability protections for companies seeking to operate amid the risk of outbreaks.

In its statement, the agencies said the United States would weigh in on the side of companies who were facing litigation for reported workplace exposures to the coronavirus, as long as the companies were following the standards that the C.D.C. and OSHA had issued for meat processing facilities.

Companies want assurances that they will not be held legally liable if a worker or customer contracts the virus at their warehouse, coffee shop or grocery store. That issue is expected to come to a head during the next round of congressional negotiations, with Republican lawmakers suggesting that any further aid to states would be conditioned on indemnifying businesses against lawsuits.

The Labor Department and OSHA also indicated that the federal government would assert authority over states, which have ordered many businesses to close.

“No part of the joint meat processing guidance should be construed to indicate that state and local authorities may direct a meat and poultry processing facility to close, to remain closed or to operate in accordance with procedures other than those provided for in this guidance,” the statement said.

Over the past few weeks, meat executives have complained that they have faced pressure from the local authorities to close plants. “We’ve been tried and convicted already in certain spaces,” Steve Stouffer, a Tyson executive, said in an interview this month.

Some of the nation’s largest facilities, run by companies including Tyson Foods, JBS, Smithfield Foods, Cargill and National Beef Packing, have been shut as a result of outbreaks. Some plants have reopened, with partitions between workers on the meat line and health screenings for employees as they enter.

While companies have been drawing on stockpiles of meat in cold storage, they have warned that supplies to supermarkets could soon dwindle as plants remain closed amid illnesses. Pressure has been mounting on the Trump administration to take action.

“It may take a while to manifest at the grocery store,” said John Newton, the chief economist at the American Farm Bureau Federation. “But make no mistake, when you see processing capacity drop by 20 to 30 percent, it will ultimately have an impact.”

In a full-page ad published on Sunday in The New York Times and The Washington Post, John Tyson, the chairman of the board of Tyson, said millions of pounds of meat would disappear from the supply chain as pork, beef and chicken plants are forced to close, leaving a limited supply of Tyson products available in grocery stores.

But the United Food and Commercial Workers International Union, which represents meatpackers, said the administration could not simply order meatpacking employees to work without taking steps to protect their safety. That included giving workers access to the federal stockpile of masks and other protective gear, ensuring daily testing was available, enforcing physical distancing and providing full paid sick leave for infected workers.

Stuart Appelbaum, the president of the Retail, Wholesale and Department Store Union, said, “We only wish that this administration cared as much about the lives of working people as it does about meat, pork and poultry products.”

Mr. Appelbaum said that the plant closures were being done for safety and that the administration could have prevented disruptions if it had mandated proper procedures at plants ahead of time.

Workers at meatpacking plants said the executive order suggested Mr. Trump was willing to sacrifice their health and safety to restart the economy.

“To me it’s just putting more people in danger. He is not concerned about the people’s life and well-being,” said Robert Hope, 59, who worked at the Tyson plant in Camilla, Ga., for 25 years.

A quality-control technician and union leader, Mr. Hope has been on unpaid medical leave since March 18 on a doctor’s recommendation, because of a heart condition that makes him vulnerable to the virus. “It’s all about politics, is what that is,” he said about the president’s executive order.

Gary Mickelson, a spokesman for Tyson, said on Tuesday that the company was reviewing the order. “We remain focused on the protection and safety of our team members in our plant communities,” he said.

A spokesman for Cargill said the company was also reviewing it, and Smithfield and JBS did not respond to requests for comment.

The disruptions have been catastrophic for American farmers. Closings of restaurants and school cafeterias have dampened demand for meat, milk and cheese, while shuttered meatpacking plants prevent pork chops and hamburgers from getting to market.

Critics have said American meat processors are partly to blame for their vulnerabilities. Decades of consolidation have left the nation’s food supply in the hands of relatively few companies. And labor groups have long criticized meatpacking plants for pushing to increase production speeds at the expense of worker safety.

The meat producers successfully lobbied for the federal government to unveil a rule last year allowing pork plants to run their production lines as fast as they want, with fewer food inspectors keeping watch. The United Food and Commercial Workers union sued to block the rule, saying it would put workers in danger.

Companies have been criticized for moving too slowly to supply workers with masks and other protective gear in the middle of the outbreak. In many plants, workers cut and debone meat in tight conditions, share meals in crowded cafeterias and walk the same narrow hallways, making social distancing practically impossible.

There is no evidence that the coronavirus can be transmitted through food or its packaging, according to the Agriculture Department.

In some cases, local health authorities have ordered plants to close, or companies have agreed to take such steps after pressure from state officials. Some shuttered plants have already started to reopen. Last week, JBS resumed production at its beef plant in Greeley, Colo., after deep-cleaning the facility and asking workers to stay in quarantine for two weeks.

The federal guidelines issued Sunday called on companies to encourage single-file movement throughout their plants and configure workstations so employees are spaced six feet apart, among other recommendations. But food safety and labor advocates said the rules were unenforceable.

“It’s a guideline. It’s not a regulation. They can do whatever they want,” said Tony Corbo, a senior lobbyist for Food & Water Watch. “The people are still standing next to one another in these plants. They’re still getting sick.”