Trump threatens to ‘regulate’ social media platforms. His options may be limited 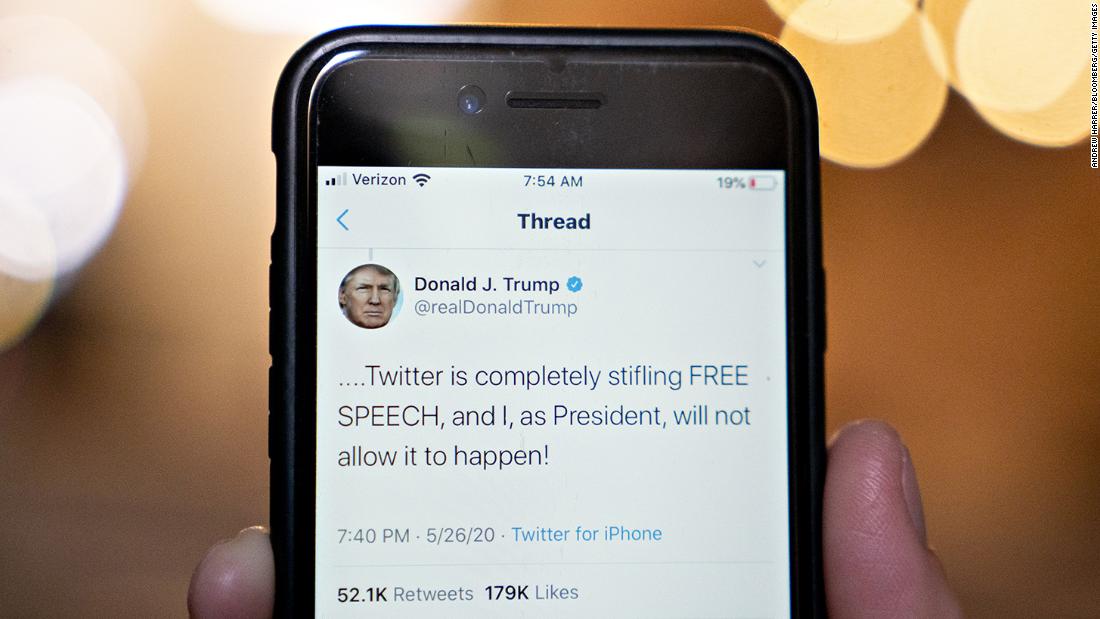 The options at Trump’s disposal could range from pushing for new legislation to pressuring US regulators to sue the companies, none of which are guaranteed to accomplish what the president is threatening to do.

The most “obvious” course of action would be for Trump to seek changes to the Communications Decency Act, which shields tech platforms from legal liability for a wide range of online content, according to Andrew Schwartzman, senior counselor at the Benton Institute for Broadband and Society.

There has been an ongoing push, led by the Justice Department and Republicans in Congress, to do just that. But changing the law would require building broad consensus in a deadlocked Congress. The Trump administration could not go it alone. And a new law that specifies how tech companies must police their platforms could raise questions about the law’s constitutionality.

“This is just another example of Trump thinking that the Constitution makes him a king, but it doesn’t,” said David Vladeck, a Georgetown University law professor and former senior Federal Trade Commission official.

Trump could pressure agencies such as the FTC and the Federal Communications Commission to take action against social media companies. But the agencies have previously resisted efforts by the White House to transform them into arbiters of political speech, with officials privately voicing opposition to a draft executive order that experts at the time said tested the limits of agency jurisdiction. The FCC regulates phone and broadband infrastructure, said Schwartzman, and lacks much jurisdiction over Twitter (TWTR) and Facebook (FB) in the first place.

“I do think although [FCC Chairman Ajit] Pai has a good relationship with the president, and they have partnered on some things, I think he is still maintaining his independence,” added one telecom industry official, speaking from his experience interacting regularly with the agency.

Schwartzman said one way Trump could seek to “harass” social media companies would be to pressure the FCC to deny those companies licenses for unrelated experiments involving satellite internet or wireless spectrum. (Google and Facebook have both tinkered with beaming high-speed internet to consumers from drones, balloons or even from space.) But those types of actions would not substantially affect the companies’ core businesses.

Meanwhile, the FTC is already scrutinizing the tech industry over antitrust concerns. Last year, Facebook disclosed that it is under active antitrust investigation by agency officials. But antitrust cases hinge on highly technical economic analyses, are subject to judicial review and take years to play out.

Trump could try to appoint allies to the FTC who might be willing to launch still more probes, experts said, but the laws governing independent bodies such as the FTC make them harder to politicize than a cabinet agency such as the Justice Department. The FTC is composed of five commissioners who serve staggered terms, and their decisions are also subject to judicial review.

Unlike the FTC, the Justice Department is led by one person, Attorney General William Barr, making it the most likely tool for going after the social media platforms, several experts said. The Justice Department is currently conducting a wide-ranging review of the tech industry, as well as a specific antitrust investigation of Google. The agency is widely expected to wrap up its tech review this summer.

Barr has alluded to complaints of anti-conservative bias on several occasions. In December, he told an audience of state attorneys general that the Communications Decency Act “has enabled platforms to absolve themselves completely of responsibility for policing their platforms, while blocking or removing third-party speech — including political speech — selectively, and with impunity.”

Last week, the Wall Street Journal reported that Trump has considered establishing a White House commission to study allegations of conservative bias. But that only underscores the limits of Trump’s direct influence on the matter.

Despite the limitations, growing tensions with the White House could still be perceived as a threat to the companies. Twitter and Facebook saw their shares dip on Wednesday on a day when the overall market was up.