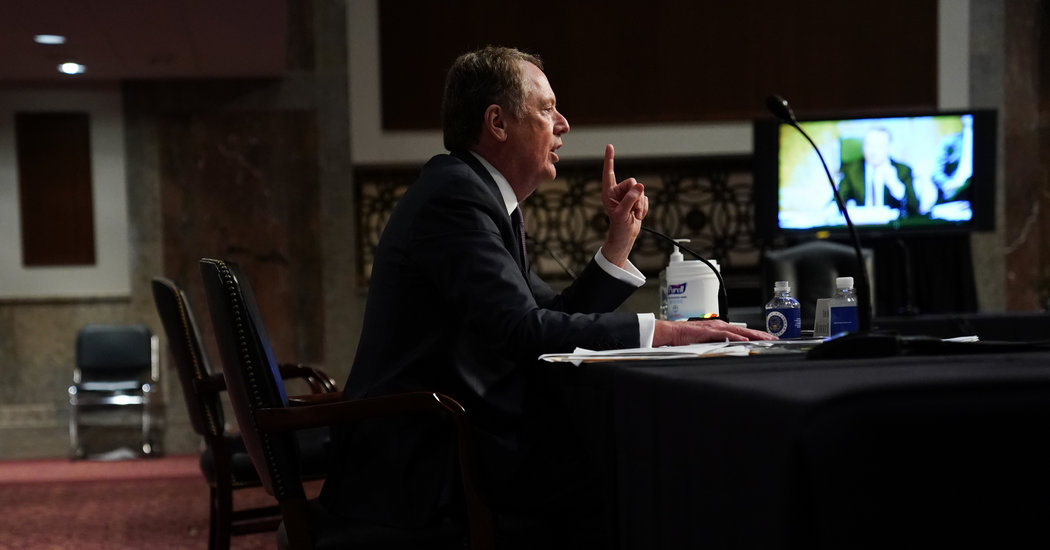 WASHINGTON — The Trump administration’s top trade negotiator defended the president’s economic agreement with China on Wednesday, saying that Beijing was buying more American products and had reaffirmed its commitment to live up to the deal.

In remarks to Congress, Robert E. Lighthizer, the United States trade representative, instead reserved his harshest criticism for the World Trade Organization, which he called “a mess,” and the European Union, which he said could face tariffs if it did not agree to a trade deal.

Mr. Lighthizer said his office was closely tracking China’s purchases of American goods, which were agreed to in a pact in January, and was in frequent contact with Chinese officials. China has committed to buying an additional $200 billion of American products by the end of next year. That is a goal many analysts said was unrealistic even before the pandemic, which has suppressed consumer demand, disrupted supply chains and caused a crash in oil prices, resulting in purchases that are even lower than anticipated.

“Every indication is that in spite of this Covid-19, they are going to do what they say,” Mr. Lighthizer said of the Chinese.

Mr. Lighthizer also praised the administration’s trade record, including new or revised deals it has signed with Japan, Canada and Mexico that he said had improved the terms of trade for American farmers and businesses. And he said that a comprehensive trade deal with the United Kingdom was just a matter of time, though it was not likely to be concluded before the election in November.

But he was more circumspect on the potential for a deal with another big partner, the European Union, which he accused of “thinly veiled protectionism” for rejecting American agricultural products over alleged safety concerns. A deal with the European Union is “not looking good in the short term,” Mr. Lighthizer said, adding that “the president will use tariffs if he has to to get a fair shake for American businesses.”

Mr. Lighthizer defended the administration’s aggressive use of tariffs and rebuffed requests from various lawmakers to reduce or defer the levies it charges on products imported by people or businesses in their districts, in order to reduce costs on businesses that are struggling with the pandemic.

Over the last several years, the Trump administration has deployed tariffs more aggressively than any in modern history, turning to tariffs to shelter American businesses from competition and create leverage in trade negotiations. The president has imposed new duties on steel, aluminum, washing machines, solar panels and more than $360 billion of Chinese goods in the last few years, levies that have helped some American businesses but raised costs for others that depend on imported products and components.

Opposition to the tariffs has increased since the pandemic began, with lawmakers and trade groups pressing the administration to waive some of these taxes to help the United States bounce back from the economic downturn. They have questioned the administration’s decision to continue imposing levies on some medical products and components that have been in short supply, like protective gear, hand sanitizer or ventilator parts.

“Tariffs are taxes that American businesses, farmers and consumers pay,” Jonathan Gold, the spokesman for Americans for Free Trade, which lobbies against tariffs, said in a statement Wednesday. “The administration should not leave any economic tools on the table during this time of economic recovery, and that includes deferral of all duties that American companies pay.”

But Mr. Lighthizer was not sympathetic to that view. He said he opposed reducing tariffs on imported medical products needed to address the pandemic, since levies were needed to encourage domestic manufacturing of crucial items.

“I think we ought to do what we can to encourage U.S. companies to manufacture in America, and one of the ways to do that is to have tariffs,” he said.

Mr. Lighthizer also renewed the administration’s fight with the World Trade Organization, which he said had failed America and the international trading system and was in need of “radical reform.”

As in previous remarks, Mr. Lighthizer said the international trade body had evolved into a forum for litigating trade disputes rather than negotiating new trade agreements, and criticized the group for infringing on how the United States chooses to protect its workers from foreign competition.

“If it never goes back into effect, I think that would be fine,” Mr. Lighthizer said.