Trump warns stocks will ‘disintegrate’ if he loses. JPMorgan says a Biden win could help stocks 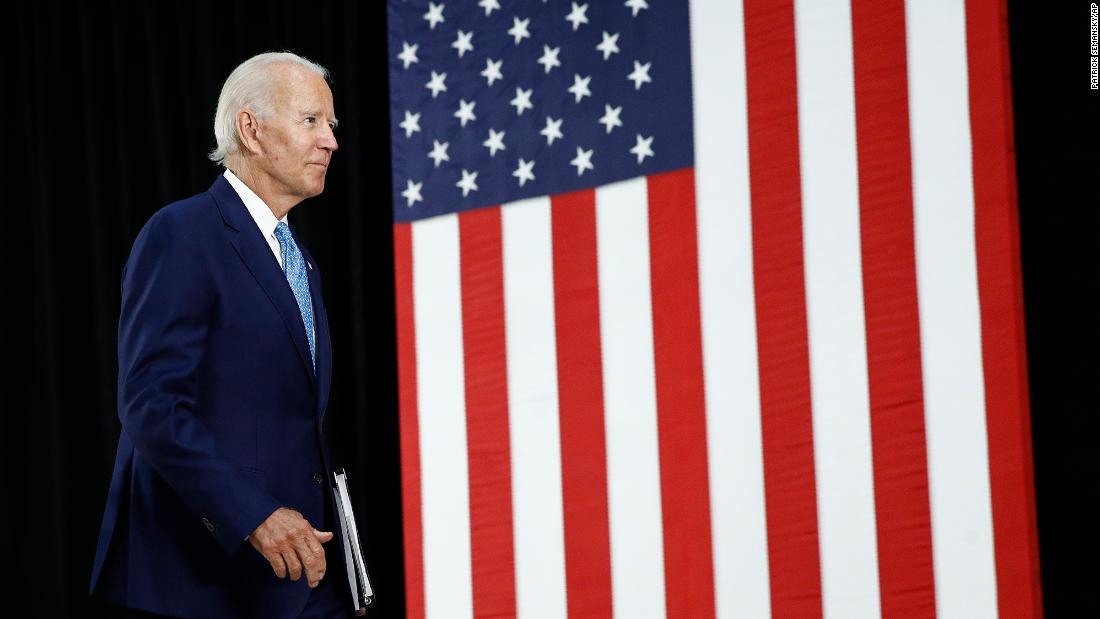 “If you want your 401k’s and stocks, which are getting closer to an all time high (NASDAQ is already there), to disintegrate and disappear, vote for the Radical Left Do Nothing Democrats and Corrupt Joe Biden,” Trump tweeted Monday.

JPMorgan Chase is predicting that a blue wave could even help boost stocks.

“The consensus view is that a Democrat victory in November will be a negative for equities. However, we see this outcome as neutral to slightly positive,” JPMorgan strategists led by Dubravko Lakos-Bujas wrote in a note to clients Monday.

That’s because investors are betting a President Biden would moderate his policy proposals — including raising taxes on the rich and corporations — to fit the weak economy he would inherit. They’re also expecting the negatives, like higher regulation, would be offset by positives like fewer tariffs.

Democrats will likely “prioritize policies that will promote economic recovery since the unemployment rate will likely be around 9% in the first quarter of 2021,” strategists at UBS wrote Monday. “We think a Blue Wave will have a roughly neutral effect on equities.”

The old adage is that Wall Street likes gridlock in Washington because it means politicians have less room to mess things up.

But history offers some hope for investors losing sleep over a blue wave. There have been five times since World War II when a Democratic president was backed by a unified Democratic majority in Congress: 1948, 1960, 1976, 1992 and 2008. Markets reacted negatively, but only initially.

The S&P 500 declined by an average 2.4% in November following those Democratic sweeps, according to Sam Stovall, chief investment strategist at CFRA Research.

By December of those years, the S&P 500 gained an average of 3.1%, advancing in every instance. Even more significant: The S&P 500 rallied an average of 10.4% in the subsequent calendar year as the shock wore off, gaining ground in all but one year, CFRA found.

“Should a similar sweep occur, history hints (but does not guarantee) that the initial shock will send stocks lower, but then recover in the following month and calendar year,” Stovall told CNN Business in an email.

Blue Wave chances on the rise

Although a Democratic sweep looked unlikely just a few months ago, the pandemic, racial tensions and economic turmoil have shifted political winds.

Of course, that still leaves a substantial chance that Republicans still control the White House and the Senate.

And no one knows for sure what will happen, in the election or the stock market.

Few predicted Trump would defeat Hillary Clinton in 2016, and many Wall Street strategists feared Trump would be a disaster for the stock market. Instead, the S&P 500 took off like a rocket ship when Trump won.

A Biden administration, too, would produce winners and losers in the market. Companies that benefited the most from Trump’s corporate tax cuts could stumble, because Biden has proposed raising the corporate rate from 21% to 28%.

Health care stocks are already bracing for potential policy trouble: The sector is trading at nearly its lowest relative valuation multiple on record, according to Goldman.

Fossil companies would also be pressured by a reversal of Trump’s efforts to cut red tape, because Biden and Democrats have promised to move America away from these fuels.

Still, such perceived negatives for the market would likely be offset. For instance, Democrats’ clean energy push would accelerate the booming ESG movement and boost renewable energy companies.

Softening tariffs could be a “significant boost” for corporate earnings by reducing costs and lowering import prices, JPMorgan says.

Another positive: Democrats want to raise the federal minimum wage of $7.25 an hour. Higher wages would eat into corporate profit margins, but they also mean Americans have more money to spend — so JPMorgan says it would be a would be a “net positive” for S&P 500 companies.

A Democratic sweep could also pave the way for America to ramp up spending on crumbling roads, bridges and airports. A massive infrastructure package would create jobs and boost industrial and material stocks.

Perhaps most important to investors, a Biden victory wouldn’t stop the avalanche of easy money from the Federal Reserve that catapulted US stocks.

“I’m not worried at all,” Kristina Hooper, chief global strategist at Invesco, said of a potential Biden win. “The Fed is dictating so much of what is happening to the stock market. There’s a lot less influence from the person at 1600 Pennsylvania Avenue.”